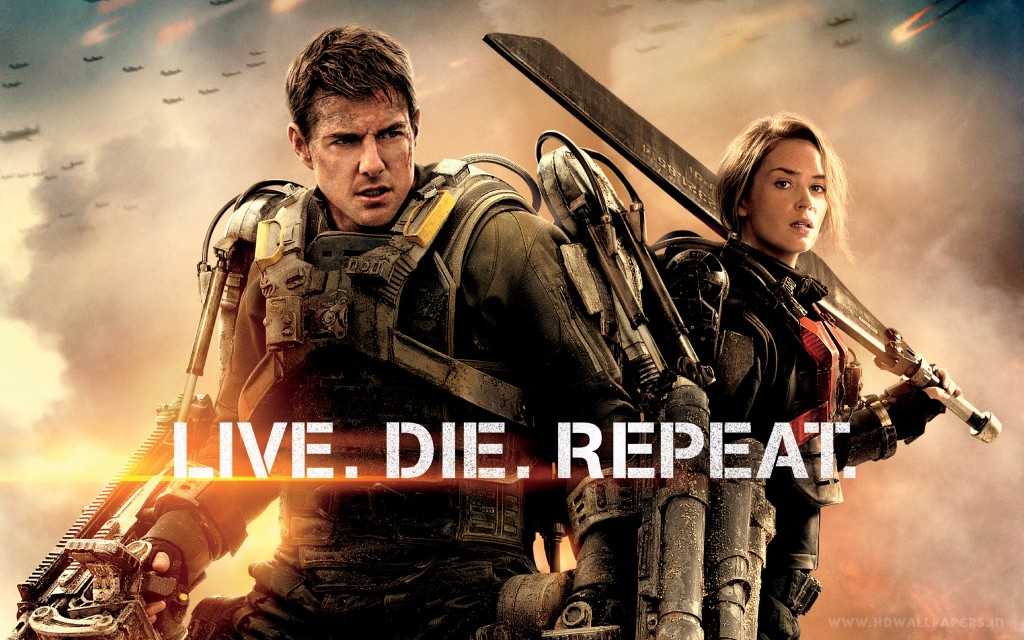 When I went to see this movie, it was playing on one screen at our local theater for a grand total of… maybe 4 showtimes that day. Meanwhile, it was opening weekend for Transformers 4: Electric Boogaloo, which was playing on most of the other screens and probably also being projected onto the walls outside like a makeshift drive-in. What I’m saying is, Edge of Tomorrow is not getting the screen time or attention it deserves, while other less-deserving action flicks this summer are cleaning up. According to Rotten Tomatoes, Transformers has raked in hundreds of millions of dollars with a 17% critic approval rating. Meanwhile, Edge of Tomorrow is not doing so well despite its 90% approval rating. Maybe, just maybe, I can convince you to give the better movie a chance while it’s still playing.

The premise, as many other reviews have said, is basically Groundhog’s Day meets Starship Troopers. The Earth has been invaded by nasty aliens, and humanity is about to launch a last-ditch assault to reclaim Europe and crush the alien menace. The main character, William Cage (Tom Cruise), is a slick talking recruitment officer who has convinced millions of young soldiers to join the good fight while neatly keeping himself out of harms way by looking good on camera and saying the right things. But when he is sent over to Europe and informed that the brass want him on the beach of Normandy filming the invasion first-hand (did I mention that the battle is a rather obvious D-Day allegory?) he freaks out and tries to run. He’s arrested as a deserter, knocked out, and wakes up to find that he has been busted down to private and will not just be filming the battle, but he will be fighting on the front line. With no training.

He goes into battle, bumbles around for a while and then, predictably, gets killed. And that’s where the story really gets interesting. He wakes up, back at Heathrow, back in cuffs. He re-lives the battle again, gets killed again, and wakes up back at Heathrow. Somehow he is stuck in a loop, re-living the same day over and over, but retaining his memories each time.

This premise could be botched in many ways. It could come across as goofy. It could be hopelessly confusing. It could be boring and repetitive. But amazingly it manages to thread the needle and be none of these. The director and writers do a great job of establishing the ground rules of this time-travel story, proving key reference points so that as the movie progresses, they can convey the repetition without having to show every moment of every day over and over. Right when you start to get sick of seeing the same events, Cage does something different to change the course of the day, or manages to survive farther and encounter events you haven’t seen yet.

Eventually he teams up with badass Rita Vrtaski (Emily Blunt), who is the hero from the only previous victory against the aliens. How did she win that battle? Well it turns out the same thing that is happening to Cage happened to her, and she was able to re-play the battle over and over until the humans won.

The movies has been described as video-game-like, and it really is. But don’t misinterpret this as a negative. Just like a game, Cage and Vrtaski try and try again until they master every move of the battle, progressing farther and farther each time. They try things that go horribly wrong and have to re-start. It’s a really fun movie experience, made much more fun by the dark humor that pervades the story. The many many ways that Cage gets killed range from horrible to, frankly, hilarious.

Late in the movie, it gets really interesting because as the viewer you’re not sure if this is the first time Cage has gotten as far as he has, or if this is the 100th, and neither is Rita (remember, she doesn’t get to remember the thousands of tries. Every time, she is meeting Cage for the first time). This also sets up a strange love interest subplot, where Cage is trying to woo the girl, but even though he feels like he has been spending months with her, she barely knows him. The movie does a surprisingly good job of this, with Cage taking advantage of his time traveling powers to do small thoughtful things for her like knowing where the coffee is in an abandoned house that they shelter in.

The ending is satisfying, with just enough of a time-travely twist to make you scratch your head and leave the theater talking through it with your friends. One of the things that I enjoyed about this movie is that it assumes its audience is smart enough to keep up. It’s a big, loud action movie but the dialogue and pace are brisk and intelligent.

So, if you’re looking for an action movie this summer, I highly recommend choosing Edge of Tomorrow over Transformers. I haven’t enjoyed an action movie as much as this one in quite a while. It’s got all the battles and explosions you could want, it’s not a sequel, and as a bonus, it’s smart and funny and actually seems to respect its viewers so you don’t have to do the walk of shame back to your car. Go see it! Bring your friends!