Well, that does it for another season of Game of Thrones!  This post will be covering the final two episodes of the season, because I fell behind while on vacation. Here be spoilers! 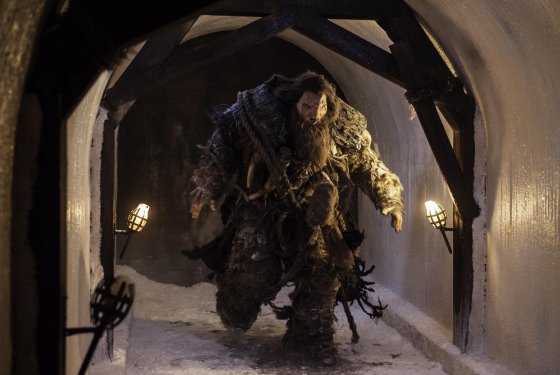 Episode 9 is pretty easy to recap because it was one big battle at the Wall. I don’t have a lot to say about the particular events of this episode, because despite a lot of action, the plot wasn’t moved forward very much. Sam and Gilly are reunited and Sam finds he has more guts than he used to. He even gives some advice to Pyp before the battle.

The main thing to mention about the battle is the apparent complete lack of tactics on either side. The wildlings supposedly have 100,000 men, but they all attack at the gate and they only send a small number at a time. Seems to me, if you have than many soldiers, you would attack along a long stretch of the wall. Or for that matter, avoid Castle Black entirely, and just climb over the wall in one of the unguarded sections. On the other side, the Night’s Watch sure did waste a lot of arrows shooting at guys who were no threat to the wall. Wouldn’t you want to wait and let the dudes climb up a ways (and let some of them fall on their own), and then just shoot at the ones who get close?

Speaking of which, the battle inside castle black was good old fashioned hacking and slashing, but ever since watching this video about how poorly on-screen battles are portrayed, and in particular the part at the end about how everyone nicely pairs off into separate duels, I have to chuckle.

Anyway, Grenn and Pyp are killed by a giant bursting through the gate, and Ygritte is killed by a boy with a bow (who nonetheless is apparently so strong that his arrow goes clear through her torso). This makes Jon sad, and he goes on a suicidal mission to assasinate Mance Rayder.

And that’s the end of Episode 9! I was surprised they didn’t finish this episode with Stannis’ surprise arrival, particularly because they had so many other plot points to cover in the final episode of the season. Well, Stannis shows up first thing in Episode 10, after a very good scene between Jon and Mance. I really liked the short exchange between Mance and Stannis, where Stannis orders him to kneel and Mance says, almost sadly, that wildlings don’t kneel. The expression on his face basically says: “I might get killed for this, but kneeling is just not gonna happen. What’s a man to do?”

Even farther north of the wall, Bran and company finally arrive at the great weirwood tree, only to be attacked by skeletons. This scene came across as a bit hokey, I think because the baddies were literally skeletons rather than frozen zombies. Skeletons just look more fake, I think. Also, apparently the children of the forest can cast fireballs? Also also: Jojen gets killed?! I take it this means he doesn’t have any more important role to play in the books and, having delivered Bran to the Three Eyed Raven, he is superfluous and therefore must die. Inside the tree, Bran meets up with the man who is the three-eyed raven, who tells Bran that he will never walk again, “but you will fly.” Cryptic! Book readers know some of what is coming on this storyline, but not all that much. The show is burning through Bran’s plot very quickly, and is well into the 5th book at this point.

Over in Meereen, Dany is having more and more trouble. First, she speaks with a man who wants to return to slavery, where he can at least do what he’s good at (teaching the master’s kids) rather than living in the homeless shelters that Dany has set up. She bristles at the idea that he would want to go back to slavery, but can’t do anything but grant the man permission to work for his former master. (Seems like this would be a good time for her to get some trusted lawyers together and write up regulations on what constitutes a fair contract so that, as Barristan warns, people don’t return to slavery in all but name.) Next up, a man comes into the throne room weeping, and reveals the charred bones of his three year old daughter. Drogon has apparently moved beyond just killing goats. This leads to Dany luring the remaining two dragons into the catacombs and sadly chaining them up. The irony of Danerys, the great breaker of chains, having to shackle her dragons is strong here, and the scene was well done.

In King’s Landing, we see Cersei, Pycelle, and Quyburn examining the barely-living Mountain, who is suffering from the wounds and poison that Oberyn gave him before being crushed like a melon. It was nice to see this set up, with Cersei basically shifting the power from Pycelle to Quyburn, and Quyburn’s ominous response when she asks if the treatment to save the Mountain’s life will weaken him. “Oh no,” he says, implying that it will have quite the opposite effect…

Cersei then goes and has a chat with father dearest, and when he refuses to allow her to get out of marrying Loras Tyrell, she drops the truth bomb on him: all the rumors about her relationship with Jamie are true. Leaving a stunned Tywin, she goes to Jamie and tells him, basically, that she’s tired of keeping their relationship a secret. Of course, their scene here is tainted by the rape scene earlier in the season, which apparently the show didn’t think was rapey at all, which explains why all the scenes afterward don’t seem to acknowledge it ever happening.

Later on, Tyrion is surprised to get a visit from Jamie, who sets him free with Varys’ help. Jamie leads Tyrion to the escape, and leaves him there, but Tyrion has some things to do before leaving. He climbs up to his father’s chambers, only to find Shae in the bed. In a painful scene without any dialogue, they fight, and Tyrion chokes her to death with her golden necklace (which I’m sure was a chain of linked hands like in the book, but it wasn’t obvious in the show).

Tyrion then grabs the crossbow on the wall (apparently Tywin shares Joffrey’s fondness for the aesthetics of crossbows) and goes to find Tywin on the toilet. Tywin tries to talk his way out of the situation, but says the word “whore” one too many times for Tyrion’s liking and gets a quarrel to the gut, followed by another to the heart. Happy father’s day Tywin! I expected this to be my favorite scene in the finale, because it’s such a great scene in the books, but it seemed a bit rushed. 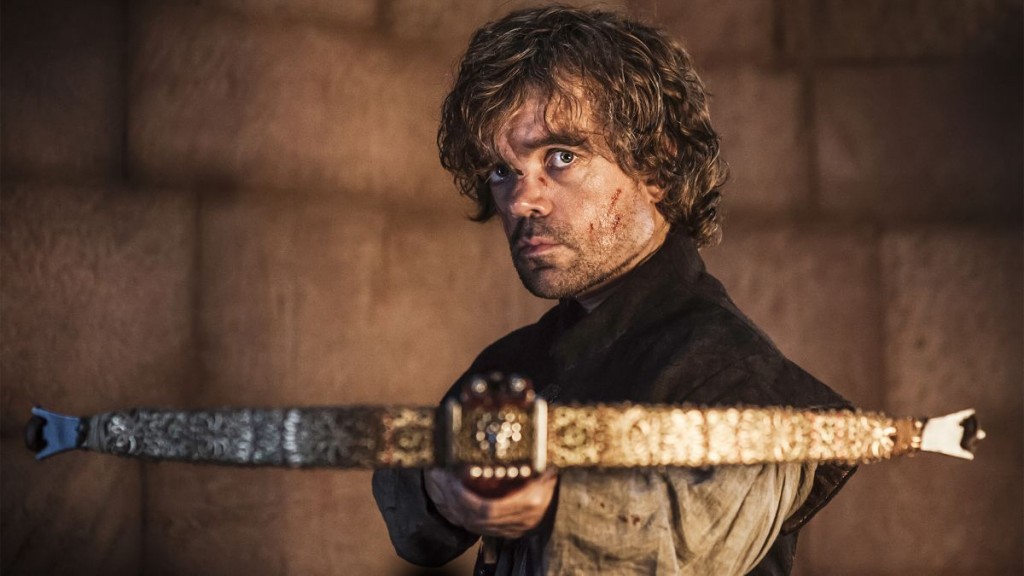 Instead, my favorite scene was with Arya and the Hound. They run into Brienne and Pod, something that definitely doesn’t happen in the books, but makes a lot of sense. The brief conversation ebtween Brienne and Arya was wonderful, as they both are pleased to find another woman who prefers swordplay to ball gowns. But one the Hound forces Brienne to admit that she was sent by a Lannister, that brief glimmer of a friendship is over. In an excellent exchange, Brienne and the Hound argue over who is better suited to take care of Arya, and then have an epic duel which ends with Brienne biting the Hound’s ear off and toppling him off a cliff. But Arya doesn’t want to go with her, and hides.

Once Brienne is gone, Arya speaks to the Hound, who begs her to kill him, but she just stares at him. Finally, instead of killing him, she takes his money and leaves him to his fate. In the final scene of the episode, Arya finds her way to a peaceful prot town and tries to buy passage on a ship north to the Wall. There is no ship headed that way, but there is one headed to Braavos. She remembers the iron coin that Jaqen gave her, and when she presents it to the captain he immediately grants her a capin aboard his ship. The episode ends with Arya turning away from Westeros to look ahead across the ocean at her new life.

This was a jam-packed episode, and was longer than most. It was great, but I wish they had taken some more time with some of the plot lines by cutting down on the battle in episode 9. A lot of people were surprised that Lady Stoneheart didn’t make an appearance, but I was pretty sure she wouldn’t. There was no groundwork laid for her at all this season, so it would have been difficult to remind viewers of who Berric Dondarrion was, and about his eerie re-animation ability, and then have the big reveal all in one episode. Plus, when I heard the episode was titled “The Children” it was pretty clear that the supernatural quota would be filled by the Children of the Forest. The big question now, of course, is: if not this season, then will there be a Lady Stoneheart at all? In the books, she hasn’t done much since the reveal, so maybe the show is waiting for there to be more plot to work with. Or maybe she’s not that important overall, and will just not be a part of the show.

Given where some of the story arcs ended this season, well into book 5, I’m getting worried about the show going past the books next season and beyond. I really don’t think I want to watch the end of this series before I read it, but if it really is the case that the show will be over before the books, it will be almost impossible to stay spoiler free until the books are done. I was expecting the show to take it slower on some of the plot arcs this season for this reason, but it seems to be barreling forward. I guess we’ll see how things stand next year.