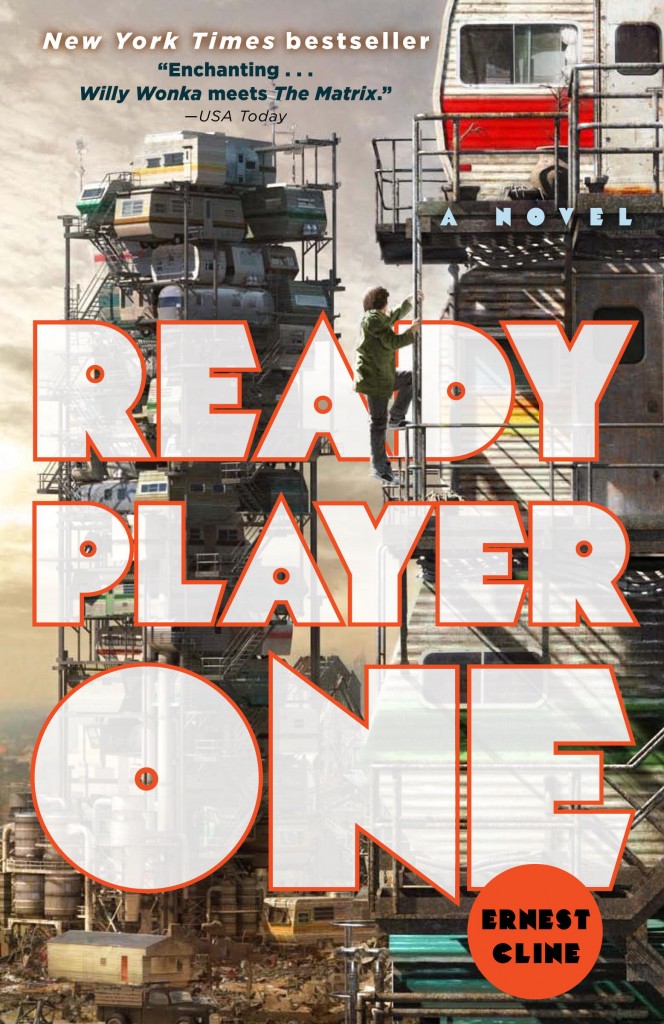 Ready Player One by Ernest Cline is a a fun near-future sci-fi novel that doubles as a love-letter to everything geeky and everything 80s, and especially geeky things from the 80s. Here’s the premise:

In the mid 21st century, the world is a mess thanks to the effects of climate change. The economy is in shambles, fossil fuels are incredibly expensive, and most people live in poverty in densely packed “stacks” – skyscrapers made of stacked mobile home units. At the same time, the internet has undergone some drastic changes of its own. It has now been superseded by the Oasis, a virtual world that is sort of like if World of Warcraft, Facebook, and Reddit had a baby. People spend much of their lives immersed in this free virtual online world, using virtual reality visors and haptic suits to experience the Oasis as if it is reality. Kids go to school in the Oasis, business people do their business there, the Oasis currency has superseded the dollar as the coin of the realm. The Oasis is everything, for everyone. The real world has become sort of an afterthought.

Of course, when the guy who created the Oasis, James Halliday, passes away, there is the question of who gets his fantastic wealth and control over his company (and therefore, the Oasis). Rather than bequeath the money to a relative, or found a charitable foundation, or other traditional routes, Halliday instead creates the greatest video game “easter egg” in history. Anyone who can acquire the three keys and pass through the three gates will find the egg and gain control over Halliday’s fortune and the Oasis itself. Halliday was obsessed with geek culture from the 1980s, so of course the hunt for the keys and the egg is based on deep knowledge of everything 80s.

The main character of the story, Wade Watts, is a teenaged “gunter” (short for “egg-hunter”) who has made it his life’s work to find the egg. He has mastered every arcade game out there, and can recite the dialog from every 80s movie and TV show. He knows the original Dungeons and Dragons monster manual by heart and instinctively spouts the name and year of every 80s song he hears. He’s the ideal candidate to crack Halliday’s riddles and find the Egg.

The only problem, he’s not the only one looking for it. There are thousands of other gunters looking for the egg, but there is also an evil corporation Innovative Online Industries, determined to cheat, lie, and steal its way to control of the Oasis. They want to turn the open-source paradise of the Oasis into an advertisement-filled gated community for the rich (something that might sound awfully familiar if you have been following the current net neutrality debate). When Wade finds the first key and clears the first gate, he ends up on their hit list and has to run for his life (in the real world and the Oasis) while tries to beat the bad guys to the final egg.

In the process, Wade also has to navigate his relationships with his friends Art3mis and Aech (pronounced “H”), who he has never met in person. He falls in love with Art3mis, and Aech is his best friend, but they are also competing to find the egg, so the farther they get in the quest, the harder it is to maintain their close ties.

This book gets lots of attention for it’s frankly amazing smorgasbord of 80’s nostalgia. It is stuffed with pop culture references and nods to various areas of geekdom, and it’s lots of fun to recognize them (though for me, some of the references are from before my time). But despite all of the nostalgia, Ready Player One is quite a good near-future sci-fi story as well. The Oasis as depicted in the book doesn’t seem quite so far-fetched, given our present reality. The virtual world Second Life is similar in many ways, and Facebook recently purchased Oculus, a company developing the first commercially viable virtual reality gaming headsets. (Seriously, reading that link after reading Ready Player One is actually kinda creepy in how similar it sounds to the Oasis.) In the tradition of many sci-fi classics, Ready Player One takes a look at our present, and extrapolates plausibly to the near future, exploring a lot of the nuances in the process. A big part of the novel is how society has changed in response to the Oasis, and for me this was the most interesting part of the book.

Of course, another nice thing about having a book set in a virtual reality world, is that you can genre-hop all over the place. The Oasis has thousands of planets on it, and each planet has its own set of rules. Some planets are fantasy worlds with spells and dragons. Others are full of laser blasters and space ships. Steampunk, cyberpunk, anime, wild west, etc. It’s all there, and one of the other great things about the book is smashing those genres and fictional universes together. Remember as a geeky teenager, having heated debates over whether a Star Destroyer could win in a fight with the Enterprise? Or who would win in a fight, Batman or Superman? This book taps deep into that vein of geekiness and it’s tons of fun to read.

The only downside of this book was that, toward the end, there are a few scenes that come across as a bit… twee. I mean, the messages are nice, but the book kinda hits you over the head with them.  That said, otherwise the ending is satisfying and ridiculous in all the right ways. Ridiculous as only a mash-up of the 80s can be.

Bottom line, this book was lots of fun. It’s quick and light and full of nostalgia. If you have geeky tendencies, then by all means check it out. If you don’t, it’s still a very good speculative look at the future of the internet and gaming that you might find interesting.