This week I had the good fortune to finish two books that I enjoyed in rapid succession, so I figure I might as well review them that way too! First up, Among Others by Jo Walton: 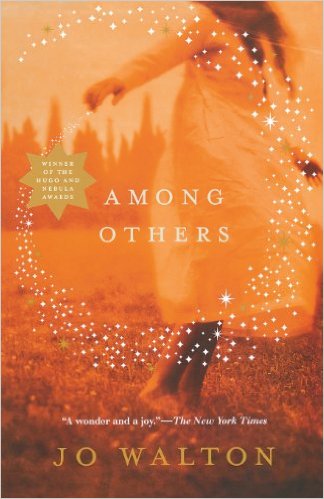 Among Others is a sort of coming-of-age story, told in the form of diary entries by a 15 year old Welsh girl named Mori. It starts shortly after a car accident which killed her twin sister and left her crippled, as she is shipped off to live with her estranged father and rich aunts, who in turn send her to a girl’s boarding school, which she hates. Mori is obsessed with reading sci-fi and fantasy, and regularly interacts with fairies and does magic to protect herself from her mother, who is an evil witch. At least, that’s what Mori thinks. Interestingly, it is never entirely clear how real the magic and the fairies in this book are, and this is something that Mori is aware of and grapples with, making for an interesting take on magical realism.

Among Others won the top awards in sci-fi and fantasy, the Hugo and the Nebula, and it’s no wonder. This book is precision targeted to hit awkward smart kids who never quite fit in and found solace in SF right in the feels, and those kids grow up and vote for the Nebula and Hugo awards. Mori is a voracious reader, and the novel is a laundry list of classic SF novels. Part of the fun of the book is reading along as Mori discovers, and reacts to, all these famous authors and books.

At the same time, the book is really about finding your place in the world when you are different, which means finding others who are different in the same way. It’s a quiet, thoughtful, and melancholy story, but it also has plenty of moments of charm and humor. The tone of the book reminded me of Station Eleven or The Namesake, both of which I also enjoyed thoroughly.

My only complaint about Among Others is that it ends somewhat abruptly, but I really enjoyed reading it and I would recommend it, especially to fans of classic SF. And speaking of classic SF, apparently SF legend Ursula K. LeGuin, whose books Mori loves, also enjoyed Among Others, and she happens to be the author of the second book I’m reviewing in this post!

Rocannon’s World is LeGuin’s first novel, and was published in 1966. It is a bit more pulpy and less serious than some of the later books that made LeGuin famous, like Left Hand of Darkness or The Dispossessed, but even in this first novel her writing is beautiful. The story follows a man named Rocannon, who is an ethnologist from a futuristic society who is exploring a planet populated by several races of human-like people at a medieval technology level. Rocannon’s ship and crewmates are killed by a mysterious and technologically advanced enemy, and most of the book is a quest across the strange world to get to the enemy base and use their technology to call for help.

Even though it is nominally a science fiction novel, the bulk of the book is essentially fantasy. In place of Tolkien’s elves and dwarves and men, the planet in Rocannon’s World has the elf-like Fiia, the dwarf-like Gdemiar, and the human-like Liuar. As Rocannon travels across the world with his group of companions, his high-tech gear (in particular, an invisible impermeable skin-like force field) leads him to be revered as a sort of God, with legends springing up about his exploits almost as soon as they occur. After all, as Arthur C. Clarke famously said, “Any sufficiently advanced technology is indistinguishable from magic.”

One of my favorite things in the novel was the archaic way that most of the various races on the planet speak, with lots of honorifics and nicknames and flowery language. For example, at one point when a new character is greeting Rocannon and his friend Mogien (a nobleman of the Liuar people), instead of saying “Hello Mogien and Rocannon” they say: “Hail Mogien, Halla’s heir, sun-haired, sword bearer! Hail, Hallan-guest, star-lord, wanderer!” This sort of style reminded me strongly of the epithets used in Homer: “grey-eyed Athena”, “rosy-fingered dawn”, “Trojans, breakers of horses”. It’s a wonderful way to convey that these are people who live in a culture where history is passed down orally, and these sorts of epithets serve a real purpose as memory triggers and in fitting speech to a specific rhythm. In the hands of a less capable author it could have been horrible and over-the-top, but LeGuin not only gets away with it, but made it one of the things I liked most.

I’ve read many books by LeGuin before, but reading Among Others made me want to dig back into some of the classics that I have never read. I am very glad that I did. I knew that I liked LeGuin’s writing, but Rocannon’s world has jogged my memory and refreshed that knowledge. I’m looking forward to reading some of her other early works!