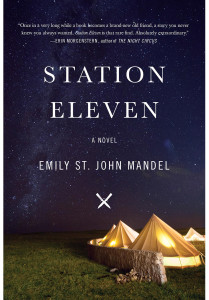 There’s no shortage of post-apocalyptic stories out there, but it has been a while since I’ve seen one done this well. The taxonomy of post-apocalyptic fiction is worth its own blog post, but for our current purposes, it can be simplified down to two types: the loud, angry apocalypse, and the quiet, sad apocalypse. Station Eleven falls squarely into the latter camp. It doesn’t tread any new ground: the premise is that a highly contagious and lethal strain of the flu sweeps the world and causes the collapse of civilization in a matter of days, leaving behind isolated groups of survivors struggling to come to terms with their new world. But the strength of this novel is not in an original premise, but in its almost flawless execution.

The story is centered around the events of a night just before the end of the world, when famous actor Arthur Leander dies of a heart attack onstage while performing as King Lear. From this central event, the novel jumps forward and back in time. It looks ahead to decades after the apocalypse, following the Travelling Symphony, a caravan of musicians and actors with a motto borrowed from an old episode of Star Trek: “Survival is not sufficient”. They roam what use to be Michigan, trying to survive and putting on performances of Shakespeare and classical music. The novel also jumps back in time, providing glimpses of characters’ lives before the apocalypse. The decadence of Hollywood and jet-setting business people contrasting with the “simple” life of the survivors of the end of civilization.

In a less-skilled author’s hands, a novel with so many jumps between characters and times could become confusing or difficult to follow, but that’s not a problem here. This book is very well-written: it’s well above par compared to most genre writing, while avoiding purple prose. Mandel deftly handles the shifts in time, place, and point of view in such a way that they make perfect sense and all build upon each other, weaving together connections between them all. She also manages the impressive feat of making the pre-apocalypse scenes just as interesting, if not more so, than the post-apocalyptic ones.

Station Eleven is the sad, quiet type of post-apocalyptic novel, reflecting poignantly on all the things about modern life that we take for granted, and speculating about the values that people would try to keep alive after the end of the world. Yet for all that, it doesn’t wallow in sadness. The feeling that it evokes is more bittersweet than depressing, and there is a hopeful strain to it.

I highly recommend this novel, whether you are a fan of the post-apocalyptic genre, or just a fan of good writing. This is one of those novels I found myself savoring I approached the end because I didn’t want it to be over, and I’m looking forward to reading it again someday.