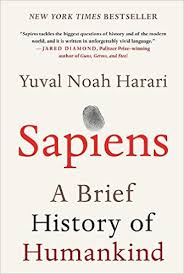 I like home improvement projects and work trips that I can drive to because they both provide me with multiple hours during which I can listen to audiobooks. In the last couple of weeks I have been working on re-tiling a bathroom, and I had a trip out to Los Alamos, and the audiobook I chose to accompany all of that was Sapiens: A Brief History of Humankind by Yuval Noah Harari.

This book falls into the same genre of nonfiction as 1491 and 1493, two of my favorite recent nonfiction reads. Basically, the “big picture history” genre, where the focus is not a single person or war or event, but rather a wide-ranging look at the disparate factors that shape the course of history.

Sapiens is about as “big picture” as you can get, starting off with the evolution of homo sapiens and the long period of time during which we shared the planet (perhaps not peacefully) with other humans such as neanderthals, progressing through the development of culture, agriculture, religion, to the development of empires, science, colonialism, and capitalism, before finally concluding with a speculative look toward the future of our species as science allows us to edit or augment our own genomes or create artificial intelligence.

It’s a fascinating book that touches on many different topics, but it has one core theme, which is the idea that the main thing that gave homo sapiens an advantage over other early humans, and what underlies most of human achievement, is our ability to talk about and collectively believe in things that do not actually exist. Harari argues that this ability led to humans who could work together in large groups, and that is the key to our success. Examples of these things that exist only because we collectively agree that they exist are nations, gods, money, corporations, and human rights, and each of these (and many others) are discussed in considerable detail.

As you might be able to tell based on that list of imaginary things, this is a book that seems to strive to make everyone feel a little uncomfortable at some point. For me, I can nod smugly as he talks about why religion is an imaginary (but nonetheless powerful) human construct, but when he starts talking about how human rights also don’t really exist, or how scientific progress has been inextricably tied to brutal colonialism and heartless capitalism, things become less comfortable.

At times, the book can get somewhat speculative and tends to make grand, weakly-supported assertions and reductive statements that set off some mental warnings for me (and, apparently, for Charles Mann, the author of 1491 and 1493). But despite that, there’s no denying that it is thoroughly thought-provoking, and on the whole I found it to be a fascinating read that presents an interesting way of looking at the history of our species. Also, simply by touching on so many disparate topics (human evolution, politics, science, history, philosophy, religion, economics, etc.), it also serves as an introduction to any of those topics and situates them within the bigger picture of human history, which in my opinion definitely makes it a worthwhile read.