The American Dream and Other Myths

It turns out moral bankruptcy is not just the domain of the White House. The arrival of the Republican bill to “repeal and replace” Obamacare, which does not repeal it but does distort it into something that has amazingly managed to enrage both liberals and conservatives (even leading some to speculate that it was designed to fail), has brought with it a barrage of horrifying statements such as:

And you know what? Americans have choices. And they’ve got to make a choice. And so maybe rather than getting that new iPhone that they just love and they want to go spend hundreds of dollars on that, maybe they should invest in their own health care. They’ve got to make those decisions themselves.” – Jason Chaffetz, in a 21st century “let them eat cake” moment

Statements like these boggle my mind, and I’ve been trying to figure out how a person can get to the point where they can say things like this and not realize what they are saying is evil. Because these guys don’t think they’re bad guys, and a disturbingly large portion of our population is on their side.

After giving it some thought, I have decided that it comes down to the myth of the American dream: the idea that anyone can achieve prosperity if they just work hard enough. It’s a wonderful sentiment that we all want to believe in, but viewing the world through this lens, you can quickly come to some troubling conclusions. If anyone can be prosperous if they just work hard enough, then the flip side of that is that if you’re poor, it’s because you’re lazy, and if you’re rich, it’s because you worked really hard. Your bank account balance becomes an indicator of your character. Being poor is a moral failure.

The other corollary is that it’s not the government’s job to help poor people, and that it’s morally abhorrent to tax rich people. After all, if poor people would just work harder, they wouldn’t be poor, and those rich people earned all that money fair and square, so why should it go toward helping people who refuse to help themselves? (I suspect that in some cases, this attitude toward taxes is exacerbated by a hazy and mythologized understanding of the American revolution that goes something like this: 1. Those who fought in the revolution were true patriots. 2. They fought because they were upset about taxes. 3. Therefore true patriots hate all taxes.)

This dovetails nicely with two related ideas about the world: Objectivism and the Laffer curve. Objectivism, the philosophy espoused by Ayn Rand and popularized in her novels, says that self-interest is morally good, altruism is destructive, individual rights are paramount, and the ideal social system is laissez-faire capitalism in which the government does not meddle in economics at all. The Laffer curve, a thought experiment originally sketched on a cocktail napkin, has grown to dominate conservative thoughts about taxation. It argues that at some point, increasing taxes actually decreases revenue because it slows economic growth. Conservatives have seized upon this and twisted it to argue that the best way to encourage economic growth and therefore help everyone (“A rising tide lifts all ships”), is to reduce taxes. These ideas raise capitalism up from being an economic doctrine to being a moral imperative. It becomes an article of faith that all problems can be solved by the invisible hand of the market, if only the market were allowed to operate free from government regulations.

The problem is, these ideas don’t really jibe with reality. Everyone wants to believe in the American dream, and there are plenty of rags-to-riches stories out there to fan the flames of that belief, but actual data throws cold water on the idea. Multiple studies show that compared to European countries, Canada, and Australia, it is harder on average for Americans to make more than their parents did. Upward mobility is particularly rare for the poorest Americans. 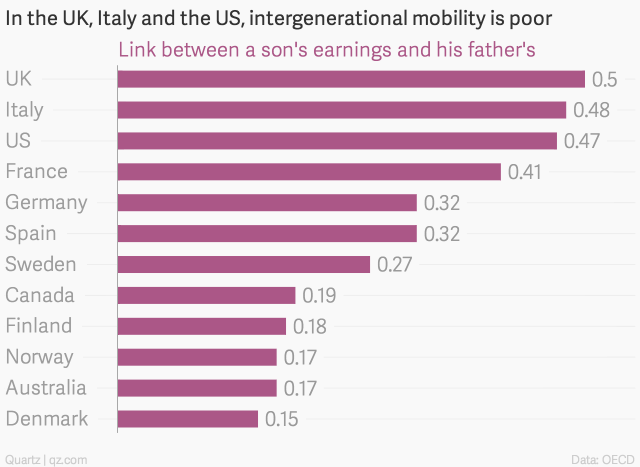 And if you think about it, this is obviously true. There are poor single moms out there working two or three minimum wage jobs just to be able to afford rent and food for their kids. Meanwhile I easily make more than them sitting at my comfortable desk for 8 hours a day, thinking about Mars, doing work that has no tangible benefit to anyone. Hard work is clearly not the only factor leading to prosperity. Yes, I worked hard through years of school, but I also had literally every possible advantage helping me out along the way. There are inescapable structural and cultural factors that are outside of any individual’s control, and they can make a huge difference. The American dream is just too simplistic.

“If wealth was the inevitable result of hard work and enterprise, every woman in Africa would be a millionaire.” – George Monbiot

The obsession with individualism and rejection of the “social contract” is also complete bunk. In much the same way that anti-vaxxers oppose vaccines even as they benefit from the herd immunity of those around them which keeps dozens of horrible diseases at bay, libertarians and objectivists who think they don’t owe society anything ignore the countless ways that they benefit from programs and facilities put in place for the public good. Working together for the benefit of all is literally the foundation upon which our species and our civilization is built. As the Author Yuval Noah Hariri argues in his book Sapiens, it is our species’ ability to work together that elevated us from just another ape to the dominant species on the planet. The social contract is what makes our civilization function and what makes us human.

And of course, blind faith in capitalism to solve all problems ignores some major flaws. Most notably, not all markets are “free”. This brings us back to health care. If I’m having a heart attack, I can’t shop around and choose the hospital that gives the best service for the lowest price, as the free market would have me do. There is one hospital in my town, so I’ll go there or die. If I lived in a larger city with multiple hospitals, I’d go to whichever was closest. Even if my major health issue was something I could plan ahead, like a scheduled surgery, it’s still almost impossible to find out prices ahead of time and shop around. And that leaves aside the fact that capitalism dictates that health insurance companies should do everything in their power not to pay for people’s medical bills, so as to maximize their profit, even if that leaves people bankrupt or dead because they couldn’t afford life-saving treatment.

As for the Laffer curve, too often it is used as shorthand by conservatives to argue that taxes should be decreased, when in reality most evidence indicates that if the curve does exist, the US is firmly on the left side of the peak. That means that raising taxes should raise revenue, and lowering taxes should lower it. This was put to the test in the real world in Kansas recently, when their governor cut tax rates significantly, which unsurprisingly drove the state into a massive deficit.

The bottom line is this: today’s GOP has become obsessed with several inter-related myths about how the world works, and base their actions on these myths instead of reality. The American dream, while a nice story, is not attainable for many, due to complicated structural and cultural issues. The social contract is the foundation of our civilization, not some burden that you can shrug off in favor of “individual liberty”. Capitalism is not a panacea. Cutting taxes doesn’t raise revenue. Being poor is not a moral failure.

Above all, we must be careful of the stories that we internalize, because they are the lens through which we view everything:

“It is easy to forget how mysterious and mighty stories are. They do their work in silence, invisibility. They work with the internal materials of the mind and self. They become part of you while changing you. Beware the stories you read and tell: subtly, at night, beneath the waters of consciousness, they are altering your world.” – Birds of Heaven, Ben Okri