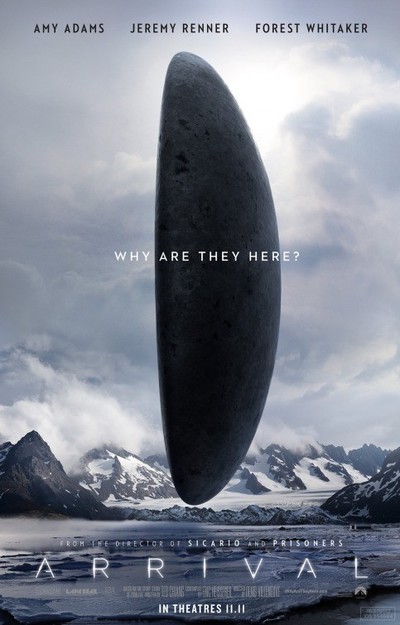 I was excited but skeptical when I heard that the brilliant short story “Story of Your Life” by Ted Chiang was going to be made into a movie, called “Arrival”. Excited because “Story of Your Life” is among the best science fiction short stories that I have ever read, skeptical because it’s an unusual story and I wasn’t sure how a movie would be able to capture its brilliance. But they did it.

Fundamentally, Arrival/Story of Your Life is a first contact story (in fact, many parts of the movie reminded me of Contact). Mysterious alien ships appear one day all over the world, and linguist Dr. Louise Banks is brought in by the American military to learn the aliens’ language and allow them to communicate. She discovers that they actually have two forms of language, a spoken form, which humans could never hope to speak because the sounds are impossible for us to make, and a written form, different from any written language on Earth in that it has no correspondence to spoken language and has a very unusual structure. As she learns the language it begins to change how she thinks. At the same time, it’s a drama about Louise’s relationship with her daughter, and it bounces back and forth between vignettes of her daughter and scenes where Dr. Banks is figuring out the alien language.

It’s a hard story to describe without giving away what makes it special, so you’re going to have to trust me on this, but you need to experience it. If you can, set aside an hour or so, get your hands on the story, and read it. Once you’ve read it, or if you don’t think you’ll get around to reading it, then go see the movie. The movie is almost as good as the story. There’s a little bit of added geopolitical drama that I don’t remember being as prominent in the story, but that’s ok. The core idea is still there and it’s done well. This is the type of intelligent science fiction that makes my whole brain light up, and is a reminder that great sci-fi is about ideas, not flashy space battles.  Do yourself a favor, take a break from current events, and check out this excellent story.