Truth, the Lesson of the Election, and the Rightward Ratchet

Like much of the country, I have been reflecting on the election in the weeks since Donald Trump’s shocking win. I am of course horrified by Trump and what his administration will mean in terms of policy, but I want to talk about something even deeper than policy that has been bothering me: the lesson that this election will teach the GOP.

The GOP has been steadily distancing itself from reality for years now, but Trump’s campaign took the trend and followed it to its absurd conclusion. According to PolitiFact, only 15% of his statements that they have rated are True or Mostly True . The Earth is warming and humans are responsible, but the GOP doesn’t want to hear it. The influx of illegal immigrants is at a 40-year low and Obama has deported more people than any previous president, but to hear the GOP tell it, we’re facing a human tidal wave of illegal immigration that is threatening our way of life. The vetting process required for refugees is incredibly thorough, but Trump says that Syrian refugees are pouring in and that they represent a Trojan Horse that will lead to terrorist attacks. The unemployment rate has been steadily falling since around 2009 to its present level of ~5%, but according to Trump it is higher than 40%. Our tax rates are relatively modest, and tax rates are currently drastically lower than they were back in the 50s (back when America was, presumably, “great”), but according to Trump we are the highest taxed nation in the world. President Obama is an American-born Christian, but Trump led the charge that he is secretly an African-born Muslim. You get the idea. The man is almost incapable of telling the truth. He lies so effortlessly and fluently that trying to pin down each lie and expose it is simply not possible, and has tied the media in knots.

Meanwhile, upon Obama’s election, the Republican party made its goals very clear: to stop Obama’s agenda dead in its tracks. Never mind that Obama’s proposals have generally been quite moderate. Never mind if some of those agenda items, like Obamacare, borrow many ideas from previous Republican proposals. Never mind if the nation’s credit rating is downgraded and the government is shut down for weeks because congress refuses to fund the government or pay the bills. The most egregious and recent violation of basic good-faith governing has been the refusal to even hold a confirmation hearing for Obama’s Supreme Court nominee Merrick Garland, leaving a vacancy on the court for an unprecedented period of time.

Like many liberals, I assumed that Trump’s  blatant race baiting and disregard for reality would eventually come back to bite him. Likewise, I hoped that the GOP’s fanatical obstructionism would eventually cause voters to say “enough is enough” and shift the balance of power. In my most optimistic moments, I hoped that this election would serve to sort of “break the fever” of the increasingly unhinged GOP, teaching the party that it needs to return to the real world and work together with Democrats to actually compromise and pass legislation. I hoped the election would teach the GOP a lesson and set our country back on track to a situation with two moderate parties which agree on a common reality even if they disagree on the best course of action.

Instead, the lesson learned from this election is that there is no need to play coy and attempt to disguise the racism and disregard for the truth that has become the signature of the Republican party. You can lie all you want. You can be openly racist and sexist and xenophobic, to the point where the KKK and actual Nazis are celebrating your candidate, and you will still win elections.

The other day, I saw the following image making the rounds on Twitter. It is a quote by Jean-Paul Sartre about anti-Semites, but it resonates strongly with the current political situation in our country: 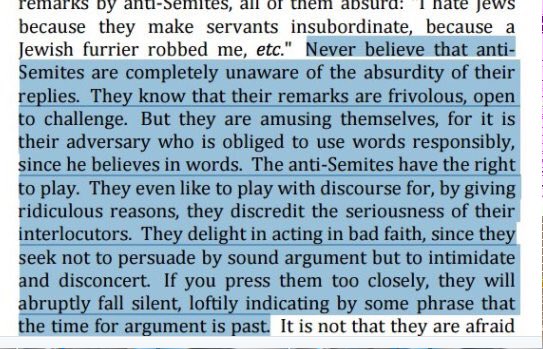 This is what fundamentally troubles me about this election, even more than the giant leap backward that we are likely to witness on policies across the board. The Republican party has been learning this lesson for a while now, but Trump’s victory clearly illustrated that the party can make outrageous, racist, blatantly false statements and our media is so fragmented and divided that many loyal Republicans will take these statements to be true and vote accordingly. Meanwhile, those of us on the left are, in Sartre’s words, “obliged to use words responsibly”. We can froth with outrage and fact check until we’re blue in the face, but those fact checks fit neatly into the narrative of a biased “liberal media”, and the outrage serves only to exhaust us and keep us bouncing back and forth from one issue to another.

Meanwhile in Congress, the Republican obstructionist gamble has paid off in spades. The GOP was able to stop almost all of Obama’s reasonable policies, forcing him to rely on executive orders (something which itself sets a dangerous precedent). The GOP can get away with this tactic because it is far simpler to unite in blanket opposition than it is to unite behind actual legislation that is rooted in a complex and contentious reality. The GOP delights in obstructing progress because a gridlocked and useless congress plays directly into their narrative that government is ineffective. It becomes a self-fulfilling prophesy. Democrats on the other hand will (I hope) never be willing to act in such bad faith because their goal is for the government to do things to help people, and therefore they cannot pull stunts like shutting the government down or blocking Supreme Court nominees indefinitely.

I worry what the result of this may be. If the Republican party continues this strategy (and why wouldn’t they, given its success?) we will end up with a situation where during Democratic administrations the Republican party essentially shuts down congress, while during periods of Republican control we get a flurry of conservative legislation passed (and liberal policies abolished), gradually ratcheting our country toward the right. The only way I see to stop this is for Democrats to manage to take control of the executive and legislative branches, something made very difficult by poor performance in down-ballot races, along with gerrymandering that favors Republicans.

And the worst part about this is that I don’t know what to do about it. When your opponent refuses to act in good faith, and indeed refuses to even acknowledge reality, but somehow manages to convince large portions of the country to believe in his lies, how do you stop that? How do you ensure that truth wins out when facts themselves are seen as inherently suspicious? How do you defeat this strategy without adopting it yourself? I really don’t know, and it is making me despair.