Another very good episode of Game of Thrones this week. Some changes from the books, some direct quotes, but all good stuff. Book and show spoilers ahead! Also, I’ve given up on doing the recaps in chronological order… lately there is so much packed into an episode that remembering it all is hard enough. Remembering it in order? Nope. 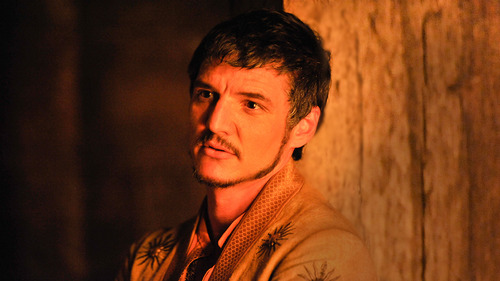 The episode started off with Tyrion and Jamie arguing about Tyrion’s awesome speech from last episode. Jamie can’t believe Tyrion threw away his only chance at living because he fell in love with a whore. And then I yelled at the TV: “But you’re in love with your twin sister. And you raped her next to your dead son’s body!” And then Tyrion said something pretty similar, pointing out that Jaime can get away with anything up to and including losing his hand and incest, but Tyrion can never catch a break because he’s always guilty in his family’s eyes. The scene ends with Jaime revealing that he can’t fight with his left hand, so he won’t be Tyrion’s champion.

The episode came back to Tyrion’s cell a couple of times as he tried to find other champions to fight for him. The second scene in his cell is between him and Bronn. This was a deviation from how it went in the books, but it was a really well done scene. It was hard to watch Bronn say no, but at the same time it made perfect sense. I particularly liked when Bronn asked Tyrion “When was the last time you risked your life for me?” Ouch.

But for me the final scene in Tyrion’s cell, with Oberyn, was my favorite of the episode. Partially because much of it was a direct quote from the books, revealing just how deep Cersei’s hatred for Tyrion goes, but mostly because Pedro Pascal and Peter Dinklage acted the heck out of the scene. The show has made Oberyn such a badass, and Pascal has played the role perfectly. I’m really looking forward to the big showdown with the mountain next week.

Speaking of which: The Mountain apparently practices his fighting on prisoners? This short scene sure got the point across that he’s brutal, but also, I have to think it wouldn’t be very good practice. I think this is the third actor the show has had playing the mountain, but at least this one is not just tall but also huge. Once he’s suited up in full armor, he’s going to look enormous, which is perfect.

The other Clegane brother had a painful episode this week. After Arya and the Hound come across a farmer with a mortal wound, we get to see Arya being nihilistic about death and then the Hound mercy-kills the guy, teaching Arya where to stab to hit the heart and make it a quick death. And then the Hound gets jumped and bitten by Biter, who he promptly dispatches. They have a longer conversation with Rorge: just long enough so Arya can learn his name, add him to her hit-list, and then cross of his name with a well-placed Needle to the heart.

I’m not sure why Rorge and Biter died here, because in the books don’t they have to cross paths with Brienne? I guess Brienne’s mauling at the teeth of Biter won’t be happening. This scene served the purpose of giving the Hound a nasty infected wound, which I believe is consistent with the books.

Later on in the episode, the Hound is trying to stitch the wound shut, and freaks out when Arya tries to burn away the infected flesh with a flaming brand. This allowed the show to give the backstory of the Hound’s scarred face, which he told to Sansa long ago in the books, further establishing that his brother is a monster. I wondered why they downplayed the relationship between the Hound and Sansa and left out this moment back in earlier seasons, but I can understand why they might have wanted to save the details of his scars for this episode.

The other odd couple, Brienne and Pod are stopping at an inn to eat something that Pod has not set on fire, and the find familiar baker who loves to go on and on about the nuances of making a proper steak and kidney pie. Hot Pie! When Brienne tells Hot Pie that they are looking for a Stark girl he clams up, but then approaches them as they are getting ready to leave, saying that he knew Arya stark, and giving them some adorable direwolf bread to give to her if they find her. So, Birenne and Pod decide that their best bet is to head toward the Vale, and the Stark girls’ last living relative, Lysa. 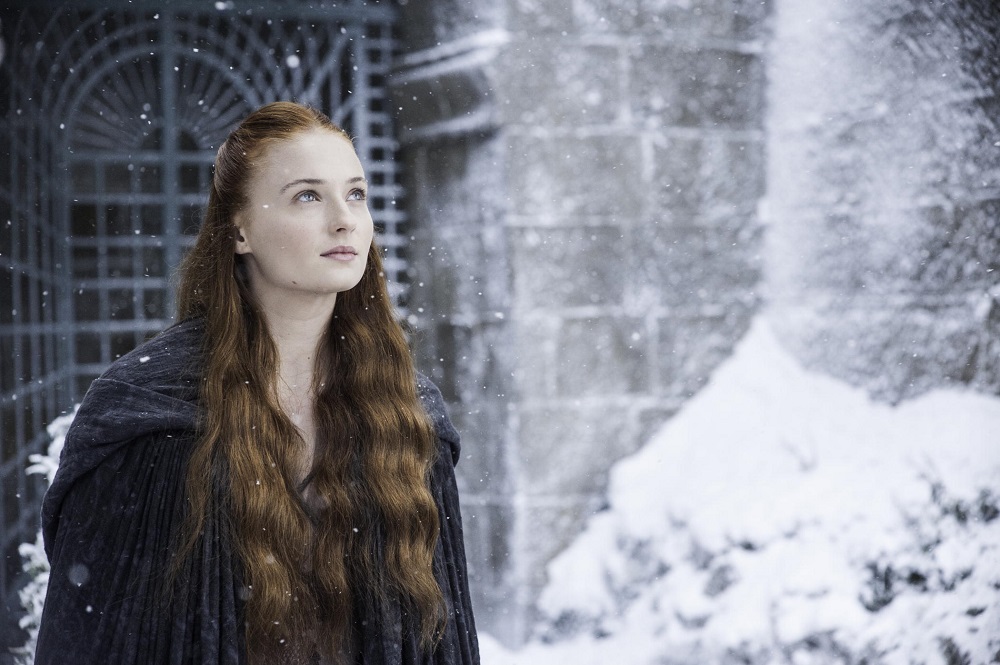 In the Vale, Sansa is reminiscing about Winterfell and showing some serious snow-castle-making prowess when Robin shows up. He gets really excited about the prospect of adding a moon door to Winterfell, apparently not making the mental leap that a moon door requires a castle to be perched on a cliff. When he knocks over a tower Sansa gets upset and nobody gets upset with the Lord of the Vale, so he goes Godzilla on her castle. So she slaps him. No seizures for show-Robin apparently, but he runs off crying and Sansa immediately realizes that she probably can’t get away with slapping Robin no matter how much he deserves it.

Littlefinger shows up and reveals that his real reason for killing Joffrey was his deep love for Catelyn. Nope, no other motives, just True Love. I definitely believe you, Littlefinger. And then Littlefinger goes into full creep mode, saying in one breath that Sansa could have been his daughter with Catelyn, and then kissing her because she reminds him of Catelyn. And of course, Lysa sees.

She confronts Sansa in the throne room and totally flips out, threatening to toss Sansa out the moon door. We are reminded again that Lysa has committed murder because of her love for Littlefinger. I still don’t understand why we learned about her murder of Jon Arryn a few episodes ago instead of this week, but anyway. Petyr comes in just in time and talks Lysa into letting Sansa go. Then he tells Lysa that he has only ever loved one person… her sister. And out the moon door she goes. Apparently in the books his last words to her are “Only Cat,” and this has the more die-hard book-reading fans upset about the line change. I was not that attached to the specific line, but it does highlight the show’s annoying tendency to change things that don’t need to be changed.

Considering that the defense the show gave for slipping Lysa’s big confession into a bit of throwaway dialogue with Petyr was that viewers are smart enough to catch little details and figure things out, it seems silly to change the line from “Only Cat” to “Your sister” so that viewers aren’t confused. Either claim that you think viewers are smart enough to follow along, or be honest about dumbing down some details to make the show easier to follow. Don’t do one and then claim to be doing the other.

Up at the wall, we just get a quick scene to show that, yes, Jon Snow made it back to Castle Black, and no, Thorne and Slynt et al. still don’t like him, or his wolf. Jon urges them to seal off the gate of the wall with ice and rocks, saying that a giant could definitely break through the 4-inch steel bars that currently brace the door. Thorne scoffs at this, virtually guaranteeing that he will later be killed by a giant busting through those doors. 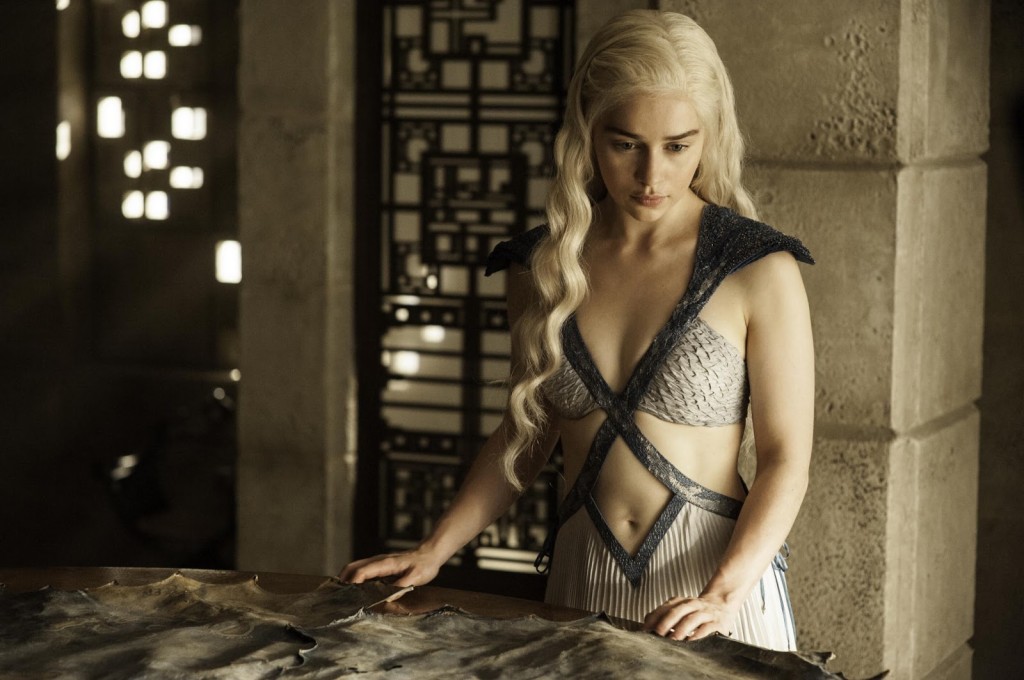 Across the sea in warmer climes, Daario sneaks into Dany’s room and complains that he isn’t allowed to kill anyone fun anymore and that if she’s not interested in him then he needs a mission. She orders him to take off his clothes. We check back in the next morning as Daario is leaving and Jorah (also known as Lord Friendzone on twitter) is not particularly happy to see that Dany has decided to put Daario’s talents to good use. He also urges temperance when she blithely says that she has sent Daario and his men off to massacre the slave masters in Yunkai.

Jorah reminds Dany (and viewers) that he was once a slaver and is only alive because of Ned Stark’s mercy. I liked how this set up a contrast between Dany and Ned, and also showed once again how interconnected the characters on the show are, even when they are on separate continents. Ned was the sort of good ruler that Dany wishes to be, and this is a Stark reminder (I didn’t even mean to make that pun until I had already written it) that she is veering over to the dark side and acting more like the bad rulers she wishes to depose than the good ruler she wants to be. She decides to let Hizdar zo Loraq accompany Daario and give the slave masters an ultimatum instead of just summarily executing them.

And finally, we checked back in with Melisandre at Dragonstone, where she is enjoying a half-filled bathtub and revealing to Stannis’ wife that she lies a lot to convert people to the faith. This scene seemed to exist primarily to fit some female nudity into the episode (can’t briefly show a naked man in the show without balancing it out with lingering shots of a naked woman), and also to inform the viewers that Melisandre has some nefarious plans involving Shireen, presumably related to her royal blood. Speaking of which, what ever happened to Gendry, who seemed to be taking the place of Edric Storm? Now Shireen is being the royal blood instead of Edric? Also, apparently Stannis and friends are getting ready to set out on a voyage. Do we know what this is about? Has the show told us that he plans to sail north, or why?

I guess we’ll find out soon enough. That’s a wrap for this week. Next week… is memorial day, so no new episode. And then we get to see the duel between the Mountain and the Viper that everyone has been waiting for!