Recap & Review: Game of Thrones Season 4, Episode 6 “The Laws of Gods and Men”

After a few slower set-up/filler episodes, this one was a breath of fresh air. Yes, it contained scenes that were completely made up for the show, but they never felt as pointless or far from the main plot as the strange Craster’s keep arc did. Warning spoilers for the episode and for future plot points ahead! 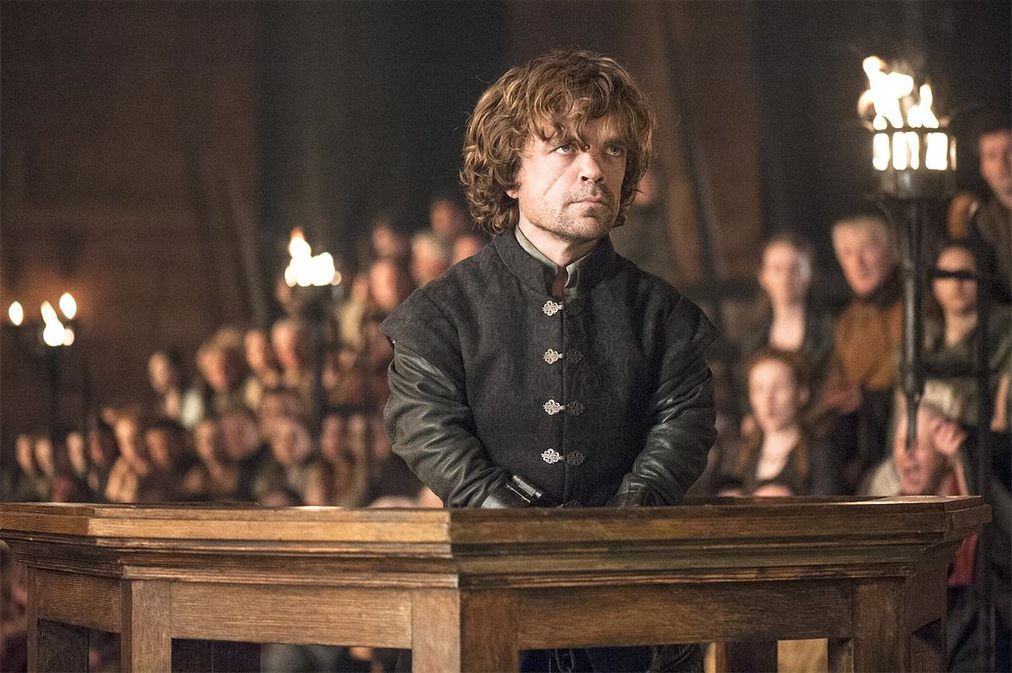 The episode starts off with the dramatic introduction of a new location: Braavos, complete with its giant titan (a bit larger than I had always pictured it, but that’s something I’m willing to forgive in a world with 700 foot tall walls of ice). In a completely new but very good scene (with a nice cameo by the actor who plays Mycroft on Sherlock), we get to see Stannis beg the iron bank for money on the grounds that his bloodline makes him deserve it. They aren’t particularly interested in his bloodline and dismiss him, but luckily Davos has a thing or five to say about how Stannis pays people back. While Stannis pouts in the corner, Davos earns him the money by impressing the bankers with Stannis’ character rather than his royal blood. This argument apparently works, because next thing we know Davos is interrupting Sallador Saan’s bathtime comedy hour at the brothel with a large sum of gold and an order to be ready to sail at dawn.

Back in Westeros, Yara and her Iron-Born seal team six decide that sailing at night is better for their purposes. We get a rousing voiceover style speech as she leads her men into the Dreadfort to rescue Theon. They scale the walls and find their way to the kennels where Reek is being kept. He’s completely terrified, convinced that this is just another cruel trick that Ramsay Bolton is playing on him, and he refuses to go. This gives Ramsay himself enough time to leave his human-hunting lady friend in the bedroom and come charging into battle half-dressed. I guess he’s a pretty good fighter because he manages to kill quite a few ironborn while only sustaining minor scratches. All TV-watching instincts say that we’re about to see a cool fight scene between Ramsay and Yara, but instead he just opens up the kennels, and next thing we know, Yara and her men are fleeing in their boats, and Yara is saying that Theon is dead.

This ending to the scene was pretty abrupt, and it bothered me a bit that a group of warriors who just battled their way through a castle full of armed and armored men, run away when a few dogs are released. I mean, being mauled by dogs is pretty scary, but the dogs aren’t wearing armor. I guess Ramsay and his men could have easily dispatched the ironborn while they were grappling with the dogs? But this still seemed a bit weak to me. In this episode I think this action scene was the weakest, but overall it was still fine, and it helped that it was early on in the episode.

There’s a brief follow-up with Reek and Ramsay later in the episode, where Reek is rewarded with a hot bath from his psychopathic host. Mostly this scene involved a lot of cringing on the part of the audience about whether even HBO would be willing to show a castrated man naked below the waist, and the answer was no. But this scene also set up Reek’s next big task: in a truly cruel twist, he now has to go and “pretend” to be Theon Greyjoy to help Ramsay take back Moat Cailin from the Ironborn.

Over in Meereen, Dany’s dragons are roasting goats and she is feeling smug when she pays the poor goatherds thrice the cost of their lost livestock. I seem to recall in the book that it’s the skeleton of a young boy rather than a goat that the poor goatherd deposits in Dany’s throne room… but maybe we’re working our way up to that. Dany is considerably less pleased with herself when the guy whose name I can never remember shows up and reveals that his father was one of the men that Dany crucified, and that he had argued against the crucifixion of the slave children. So even though he was one of the Masters, he was innocent of that particular crime that Dany claimed to be punishing him for.  Of course we knew something like this would be coming after seeing Dany confidently ignore Selmy’s advice to have mercy, but this scene was very well done. Turns out “doing what queens do: Rule” is a lot harder than it sounds and Dany is shaken after her encounter. And she has more than two hundred more to get through. Dany, if I may suggest something? Delegate some authority. Ok, maybe not to Daario, maybe not even to Jorah (he does have that unfortunate history of selling slaves and spying on you), but Barristan Selmy seems like a solid choice.

So that was the first half of the episode. The second half was Tyrion’s trial. The show did a great job with this. It felt a bit rushed, but on the other hand it might be better than erring on the side of too long and boring. All of the witnesses dredging up every witty remark that Tyrion ever made was great, mostly because it took all those moments that show viewers cheered for Tyrion’s willingness to speak truth to power and basically said: “See? This is what you get when you tell the truth in this show.” You get, in Jamie’s words, “a farce” of a trial. The brief scene between Jaime and Tywin was, I think, something new that wasn’t in the books, but it was well done. It was great to see the shock on Jamie’s face as Tywin called his bluff without batting an eye. It’s a shame that Tywin won’t be around much longer on the show, because Charles Dance is nailing the character.

They dealt with Shae’s shocking return to King’s Landing and her betrayal of Tyrion very well. This was something that the show did differently than the books, but they laid the groundwork for it very nicely and it paid off. I also enjoyed the tendency for the camera to find its way to Margery, who struggled through the whole trial knowing for a fact that Lady Olenna did the deed and that Tyrion is innocent.

But most of all, I enjoyed Peter Dinklage’s performance as Tyion. Let’s just say it, he knocked this one out of the park. There’s another Emmy in his future, I think, and it is largely thanks to the performance in this episode, which was more powerful than anything he’s had before on this show. I was a little worried at first because he was playing the whole trial so passively, with fewer outbursts and witty retorts than I remembered from the books. But this only served to highlight his complete loss of composure when Shae betrayed him. The eloquent, hate-filled, speech he gives is completely convincing as the culmination of a lifetime of torment for the way he was born, and the shocking twist of demanding a trial by combat manages to be shocking even though we’ve already seen Tyrion resort to this before. This time it’s less about saving his own life, which at this point he has basically given up on, and far more about doing anything at all to derail his father’s grand plans. Tywin thrives on being in complete control and knowing how things play out, so Tyrion’s decision to essentially turn his conviction into a game of chance is desperate but perfect.

It’s clear that we’re moving from the middle “moving the pieces around on the board” episodes into the series of major events that makes the third book my favorite in the series. I’ve been pretty down on the previous episodes even though I actually enjoyed them pretty well, but I definitely liked this episode better. And based on the preview for next week, we’ve got a lot more major plot events coming up in our near future!