Recap & Review: Game of Thrones Season 4, Episode 8 “The Mountain and the Viper” 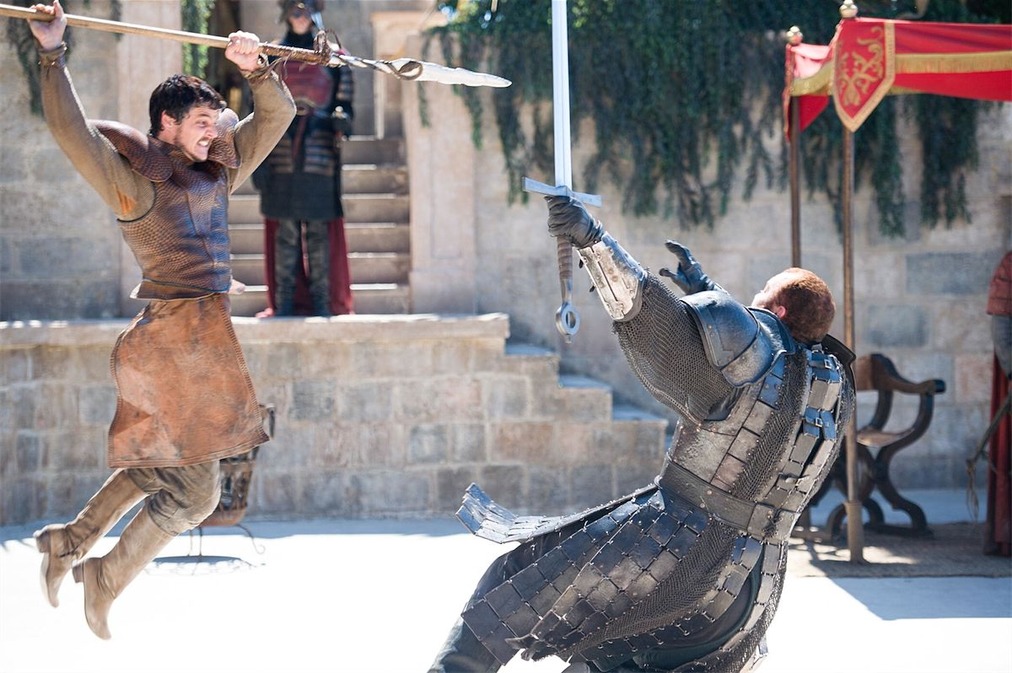 I’ve been on vacation for the past two weeks, but now that I’m back home, one of the first orders of business is getting caught up on Game of Thrones! Episode 8 was certainly worth the wait: this was one of the best episodes of the season, in my opinion.

It starts off in Mole’s Town, where the wildling, including Ygritte, show up and slaughter everyone they find. We see that Ygritte is just as brutal as the rest of the wildlings… almost. She spares Gilly and her son when she finds them cowering in a back room.

At the wall, Sam is freaking out about sending Gilly to Mole’s Twon, and Jon and the others try to cheer him up, but they’re in a grim situation and they know it. Although, when they ask how 100 men of the night’s watch are supposed to stop 100,000 wildlings, I had to think to myself “Well, the 700 foot tall wall of ice is a good start.”

Over in Meereen, the interesting subplot between Gray Worm and Missandei moves forward. Missandei notices Gray Worm (somewhat creepily) watching her bathe in the river, and later he comes to apologize for her and they have a surprisingly tender scene where he says, basically, that being castrated was not all bad because it led to him getting to meet her. Which is about as close to “romantic” as this show gets. In a show with very few respectful relationships between men and women, this subplot is a nice change. I’m not sure what it says that all it took was for the man to be a eunuch for a subplot like this to happen though…

Jumping over to the North, Ramsay sends Reek/Theon to go treat with the ironborn who hold the fortress of Moat Cailin. The commander sneers at the prospect of surrender, but one of his subordinates kills him and says that if their lives are spared, he’s willing to surrender. This… doesn’t exactly work out well for him: in the next scene we see his flayed corpse. Ramsay never had any intention of letting the ironborn go, he just needed a way to get into the castle. With his success at taking Moat Cailin, Ramsay is officially named a Bolton rather than a Snow. I thought it was a nice bit of writing that Roose’s asks Ramsay what his name is in much the same way that Ramsay asks Theon/Reek what his name is. With Ramsay now an official Bolton, and Moat Cailin claimed by the Boltons, they now have control over the whole north, and the episode wraps up this subplot by showing the Bolton army marching toward Winterfell.

Back in Meereen, Barristan gets a scroll containing a royal pardon from Robert Baratheon for Jorah Mormont. I guess the mail service between Westeros and Essos is a bit slow… In any case, the pardon reveals that Jorah had been spying on Danaerys, and she is none to happy about it. She kicks Jorah out of her city. I could have sworn that this betrayal already happened much earlier, but maybe I’m confusing my book memories with my show memories. It seems odd to me that it took so long for the message to arrive. Haven’t we seen the small council meeting in King’s Landing with relatively up-to-date information about what Danaerys is up to? Or maybe I’m confusing the book and the show again.

Over in the Eyrie the nobility of the Vale are paying Petyr a visit, investigating the rather suspicious death of Lysa Arryn. Petyr claims it was suicide, and then the nobles summon Sansa in to testify. The details of Lysa’s murder were changed for the show so I was interested to see how the aftermath would play out. In the book, there’s a minstrel who can be framed for the murder, but in the show, it’s just Petyr and Sansa. In a turn that surprised me, Sansa admits to being a Stark, and then tells the nobles of the Vale a well-crafted mix of truth and lies to convince them that Lysa did indeed kill herself. At the end of her testimony, Sansa shares a look with Littlefinger that I took to mean “there, I said just what you wanted me to say,” but it turns out that in the show, the whole testimony was Sansa’s idea.

I’m not sure I buy this. Littlefinger isn’t the sort of person who orchestrates such a detailed plan and then fails to plan for the inevitable interrogation that follows. But even though it’s not in character for him not to be in control of the situation, Sansa’s transformation in this episode was great. Seeing her acting confident instead of helpless was quite a change, though she needs to talk to her tailor about the outfit she was wearing in her last scene as she descends the stairs looking like an evil queen. Maybe tone down the evil a bit, Sansa. If you’re going to try to manipulate people the way Littlefinger does, it would help not to look like Maleficent.

Outside the gates to the Eyrie, the Hound and Arya arrive and ask to speak to Lysa. When the guard tells them that she recently died, the Hound is crestfallen – he had been hoping to sell Arya to her aunt. Arya bursts into uncontrollable laughter. It’s tempting to say that this is more evidence that she’s becoming unstable, but really: at this point, what else can she do but laugh at how ridiculously unfortunate her life has been recently? Of course her last living relative (that she knows of) is dead too. Figures.

Finally, the episode gets to King’s Landing, where Jaime and Tyrion are chatting in Tyrion’s cell. Tyrion ends up giving a long monologue about their mentally handicapped cousin, who would spend all day smashing beetles, and how Tyrion became obsessed with figuring out why. It might seem like an odd story for Tyrion to tell his brother during what may well be their last conversation, but the point is, I think, that the world that they live in is full of morons smashing things just because they can, and Tyrion has tried and tried in vain to figure out why, particularly because he is one of the small creatures likely to be smashed.

They wrap up their conversation, and then we move to the arena where Oberyn and Gregor, the Viper of Dorne and the Mountain that Rides are to fight. Even knowing what would happen, this was a very well-done fight scene, and had my heart pounding. Stupid Oberyn couldn’t just be satisfied with killing the Mountain, he had to make a performance out of it. It’s terrible to see such a great character (quite possibly better in the show than in the books) meet his end, but really? Don’t mess around with The Mountain.

That said, just as I complained before about the gruesome “sword through the mouth” death scene earlier in the season, this “crushed skull” death mostly indicates to me that this show underestimates how strong skulls are. I’m sure a strong enough guy could kill someone by gouging out his eyes, but I am skeptical that even the Mountain could actually crush a skull with his bare hands like they showed. Anyway, it was gross, and the Viper died first, so Tyrion is out of luck.