My Experience as a Stay-at-home Dad 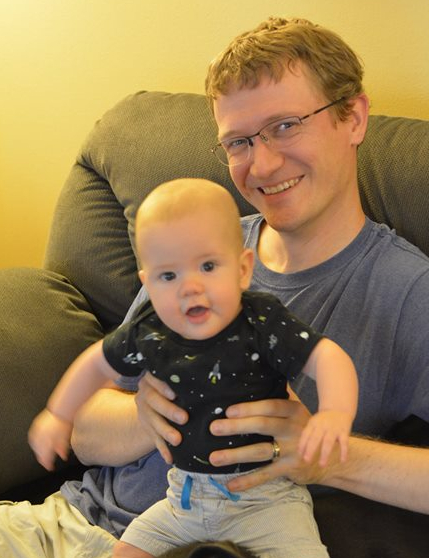 For the past couple of weeks, I’ve been taking time off of work and spending it at home with our 7.5 month old baby. I’ll continue to be mostly off for another couple of weeks (more on that “mostly” caveat later), but I have enough under my belt at this point that I thought it would be worth writing down some thoughts.

Most people, if they’re going to take time off, take it right after the baby is born, and I did take some time off then as well. But we decided early on that it made more sense for me to postpone some of my paternity leave until now. Erin was lucky enough to be able to be off work from when Shane was born in December until the end of July, so the idea is for me to take this time off now to ease the transition as she returns to work.

The fact that I’m able to take this much time off at all is pretty great. The family medical leave act (FMLA) requires employers to allow employees to take up to 12 weeks of leave in the 12 month period following the birth of a child, but it doesn’t require that leave to be paid which is absurd. The only other nations in the world that don’t provide any paid family leave at all are Suriname and Papua New Guinea. Thankfully, I have accumulated enough sick leave and vacation time that I am able to take this time off without missing a paycheck, and my job is flexible enough that I can do this without causing major problems.

What I am doing is pretty unusual though. In the workaholic culture of the United States, and particularly the culture of science, it is not common for dads to take this much time off. Everyone I have told about this plan to take time off has been supportive, sometimes with with hints of jealousy, but I still feel the need to explain myself to everyone (including writing this blog post).

I hate that I feel guilty for taking this time, and that in explaining it, I feel the instinctive need to promise that I’m actually going to use this time to get some work done. Because heaven forbid that I would be so decadent as to take a month off for the sole purpose of spending time with my baby.

So, with that, let’s turn to the question of how my decadent month of child care is going.

First, the obvious: it’s great. Instead of just seeing my baby first thing in the morning, and then in the evening when both of us are tired and fussy, I get to spend all day with him. That’s interspersed with nap times when I can read a book, or get a little work done, or make dinner, or whatever else I want/need to do. We can go on little adventures, like taking the running stroller to Buffalo Park and going for a jog, or walking to the grocery store to get some ingredients for dinner. As a homebody who is content to just hang out in my house most of the time, this works well for me.

One thing I have noticed is how quickly I lose all track of time. Not that I don’t know what day it is, but at the end of the day it’s very hard to say what I actually did when. When did he last eat? How long were his naps? Did he go to sleep nicely last time or was it 45 minutes of screaming and crying? It all blurs together, making these questions surprisingly hard for me to answer. I actually went so far as to install a phone app to track feeding and nap times just so that I could verify that, yes, it has been 4 hours since the last bottle so that’s why he’s fussy. Taking care of a baby this age is repetitive: He is generally awake for about two hours, followed by a nap ranging from 45 minutes to a couple hours. In between naps, there are bottles, diaper changes, eating solid food, maybe a bath, and play time. When you add in at least 15 minutes (and sometimes much, much more) time spent getting him to calm down in preparation for nap time, you end up with a nearly endless cycle that blurs together.

I have also learned that I’m not very good at playing with babies this age. I’m probably not supposed to say this, but babies are pretty boring. I’ve always thought of myself as being good with kids, but babies are different. My go-to way of entertaining a baby is to read board books, but unlike younger babies who don’t really do much (and therefore make a fine book reading audience), 7 month old babies are interested in everything. This also means they aren’t generally interested in a single thing for very long. We’ll sit down to read some books, and after a couple pages, he’s fussing, wanting to gnaw the book or reaching for the dog, or looking at the colorful toy on the table. Also, this may come as a surprise to you, but books written for infants and toddlers are not particularly interesting for adults.

When books fail, there are always other toys. Dangling toys are always a hit, and things that crinkle or that feel nice to chew are also good. There’s peekaboo, or bouncing on my knee, and when in doubt I can usually make him crack up with tickles or a kiss-attack. My problem is that is seems like we can go through all of these options and then I check the time and only a few minutes have passed.

I’ve found that the best entertainment for everyone involved is actually food. We’re working on learning to eat finger foods, and putting Shane in his chair and placing a slice of peach or a stick of roasted sweet potato or a piece of banana on his tray to play with will keep him happy and entertained for quite a while. Meanwhile I get to play goalie, keeping him from sending his food off the edge of the tray, or retrieving fragments of food that have managed to bypass the bib and end up in his lap.

The hardest part about this has been self-inflicted and I knew it was going to happen, but that didn’t stop it. I built up this time off as this mythical gap in my calendar during which I hoped to get all manner of things done, ranging from work that I haven’t had time to get to, to writing, to exercise, to home improvement projects. Of course, it turns out most of the day is taken up with caring for my baby (shocker, I know), leaving just nap time for all of this stuff to happen. By not fully disconnecting from work, I have lost quite a bit of that “free” time during naps to answering emails, or helping my summer student finish up her presentation and paper, or doing some work (but not enough to feel satisfied). I am ashamed to find myself impatient for the baby to go down for another nap so I can get more stuff done, but then when nap times come, I never get done what I want to, and so I end up frustrated.

If I was truly off of work, with no responsibilities that kept drawing me back in, I think this month would be more enjoyable. Instead, I have been trying to exist as some sort of Schrodinger’s dad, in a bizarre superposition of working and not working, which turns out to just make both the time off and the small amount of work accomplished feel less satisfying. I think next week I am going to try to do a better job of actually being “off” so that I can enjoy this time. The week after, Shane starts half-day daycare, and I can ease back into working.

I want to make it clear that I recognize how fortunate I am in having this time off to spend with my son. I always feel guilty and self-indulgent when I write blog posts like this, because I know that many people only wish they had lives easy enough to have the “problems” I write about on this blog. I don’t mean to be overly negative, but I think it is worthwhile to talk about parenting honestly, and I use writing here on the blog as a way to process thoughts that otherwise would just rattle around in my head. So, thanks for indulging me and reading this far.

Now, the baby is waking up from his morning nap, so I am off to have a fun day with my son!