Book Review: The Sheep Look Up 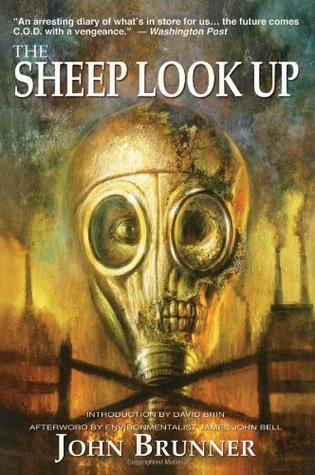 It’s strange to call a book that was published in the 70s “timely” but The Sheep Look Up by John Brunner is just that. It is a dystopian sci-fi novel about a world where there are no government regulations on pollution, so corporations are freely poisoning the air and water, making the planet unlivable. The president of the United States is an idiot who, when he can be bothered to get involved in current events at all, mostly delivers short, simplistic, often xenophobic quips that indicate that he has no idea what he’s talking about. Race and Class relations are tense and the incompetent government and ongoing environmental disasters only exacerbate them.

In the novel, the skies are perpetually overcast because of all the smog. People have to wear filter masks whenever they go outdoors, and rain comes down filthy and acidic. The Mediterranean sea and the Great Lakes are dead. Rampant pesticide use has led to an evolutionary arms race and there are now nearly-indestructible pests that destroy most crops, not to mention the resistant fleas and lice that infest the slums. Likewise with antibiotics: resistant diseases are widespread, and combined with the many diseases caused by all the pollution, most people are constantly sick with multiple ailments. All of this causes political and geopolitical unrest that grows out of control over the course of the book.

Like his other famous novel, Stand On Zanzibar, The Sheep Look Up is written in an experimental style, telling a larger story through lots of small, disjointed sections. A page or two about one character, then a news report, then a few advertising jingles, then a poem, then back to a few pages about some other characters, then an emergency government bulletin, and so on. It’s an effective way to give an overall feel for events in the country and wider world, but it makes it very difficult to keep track of main characters. By the end of the book I recognized some of the names as people I’d heard about before, but had completely lost track of who was who. It doesn’t help that they are all written in basically the same 1970s slangy voice.

I remember enjoying Stand on Zanzibar, but I read it much faster (while on Christmas break in grad school) rather than the slow pace that was forced on me for The Sheep Look Up by a new baby, work, and occasionally having to return the ebook to the library because someone else put a hold on it. I almost didn’t finish, but decided that the book was so timely that I might as well power through.

The Sheep Look Up is an unusual and challenging read, and definitely feels dated, but at the same time is frighteningly relevant to current events, and for that reason I’d still recommend checking it out.