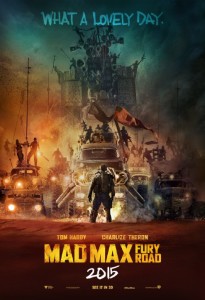 The science fiction and fantasy fandom on the internet has been gushing over the latest Mad Max movie since it came out last weekend. The movie has a 98% “fresh” rating on Rotten Tomatoes, and more importantly, has managed to annoy a bunch of “Men’s Rights Activists” because of it’s feminist messages. With all this hype, I decided I had to go and see what all the fuss was about. The verdict?

Let me explain by way of an analogy: Say you like pepperoni pizza. If you search the world over and find the highest quality pepperoni out there and then make a pizza using several pounds of this premium pepperoni in a layer several inches thick, but only apply a thin layer of sauce and cheese, do you have a good pizza? No, you have a greasy mess.

Mad Max is without a doubt visually and stylistically impressive. It includes some of the best chase scenes, stunts, and effects of any movie I’ve seen. But it is not a good movie. It is oh so very dumb, and it is not nearly as progressive and feminist as the internet seems to think it is.

I wanted to like it, I really did. I tried hard to suspend disbelief and go along for the ride, which I am pretty sure is the only way to enjoy the movie. But it has such glaring weaknesses that I couldn’t keep it up. Calling the characters one dimensional is an insult to cardboard cutouts everywhere. The plot is almost non-existent and completely predictable. I knew going in that there was going to be very little dialog, but what there was was poorly written. And the world doesn’t make any sense at all. Like I said, I get that you need to suspend disbelief, that the movie is supposed to be stylized and over-the-top, but I need my fiction to throw me at least a few bones that show that at least a little thought went into it.

If it’s supposed to be set in a post-apocalyptic world where there are wars over fuel, then does it make sense for the entire movie to be based on fleets of tricked-out tractor trailers and hot rods racing around the desert? Does it make sense for their primary weapons to be flame throwers and Molotov cocktail-tipped spears? If there’s a shortage of water, then why does the chase lead through a muddy swamp? At one point the characters say that they are going to take all the supplies they can carry on motorcycles and ride for 160 days across a salt flat. 160 days. That’s more than 5 months! Did anyone stop to think about how much food, water, and fuel it takes for 8 people to ride motorcycles across the desert for 160 days?

But ok, let’s not worry about all of that. Difficult though it can be, we should judge pop culture by whether it accomplished what it set out to do, not whether we personally liked it. Mad Max certainly achieved its goal of being a crazy over-the-top action movie. But a lot of the hype around Mad Max has focused on the fact that it’s not just a macho action movie: it has a hidden feminist message. Is it effective in conveying that message?

Well, it’s certainly not a hidden message, despite what misogynists on the internet would have you believe. The movie beats you over the head with it. The plot of the movie is that the bad guy keeps women for two purposes: milk and breeding. But his sexy wives escape and flee with the help of Furiosa (Charlize Theron). A long chase scene follows (aka the entire movie). Much is made over the statement that the women leave painted on the walls of their chambers when they escape: “We are not things”.

Now, I will grant that it is great to see a big loud action movie with a message like this, and Mad Max does some things right on the feminism front. The women in the movie are not completely helpless, and some of them (in particular, Charlize Theron’s character and the old-lady biker gang) are competent survivors capable of fighting back against the bad guys. But just because Mad Max is slightly better than completely awful on the feminism front doesn’t make it some sort of magnificent feminist manifesto. Better than terrible is not necessarily great. It’s just “less terrible”.

The movie’s supposed feminist message would be a lot stronger if it wasn’t constantly undermined by the movie itself. Women “are not things”, but isn’t it interesting that the sexy wives are the women that are rescued, and the less attractive women who are kept attached to milking machines are not worth being saved? Funny how the “breeder” wives are all stick-thin supermodels (i.e. not the ideal body type for giving birth without complications in a world with primitive medicine). And it’s a bit hard to take the “We are not things” motto very seriously when the escaped wives spend the entire movie in thin linen bikini-like outfits. At one point there’s even a break in the chase scenes to give the girls time to have what amounts to a wet t-shirt contest. Now, it has been pointed out that they are pretty matter-of-factly washing themselves off and not actively posing, and that the camera doesn’t linger on them like a creepy old lecher, which is a temptation that other directors might give in to. But at the same time, the decision to dress them all in thin linen and then hose them down was a conscious choice. A scene like that, even if it’s not shot with the “pervy camera”, does not suggest to me that “We are not things” is something that the movie really takes that seriously. Those costumes, and that scene, are the sort of thing that you put in a movie as fan service to your presumably male, presumably straight viewers. 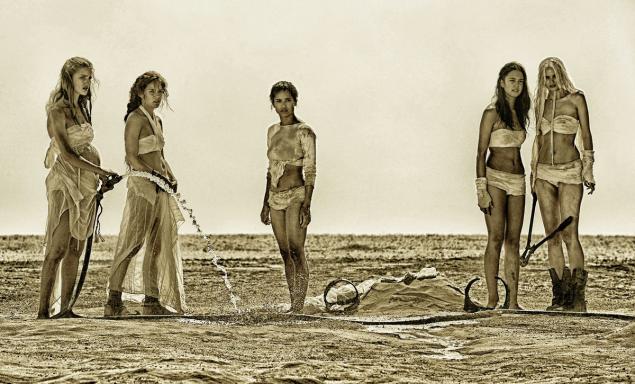 Check out all that feminism.

Likewise, later on, our heroes come across a naked woman high up on an old power line tower, and we learn that she is being used as “bait” by the old-lady biker gang to lure in bad guys and kill them. Is it consistent with “we are not things” for the good guys to be using a naked woman as bait? Was that scene necessary for the plot, or was it there to titillate the (presumably straight, male) viewer? That same blog post that I linked to praised this scene for resisting the temptation to go full-frontal, saying that the nudity was not necessary to the story, but that’s exactly my point. There was no narrative need to have a naked lady up on a tower at all. I don’t think the movie deserves praise for including some questionable scenes, but then making them slightly less misogynistic than they could have been. If this were a feminist movie, those scenes wouldn’t be there at all.

Don’t get me wrong, Mad Max takes a step in the right direction. There are female characters with agency. The sexy wives, although still mostly passive, do stand up for themselves a little bit. Furiosa and the old lady biker gang are pretty awesome. But I worry that people see Mad Max getting all of this positive press about being feminist, and then go watch it and praise if for taking these tiny baby steps while not acknowledging that (a) it’s not a good movie, and (b) it is not really all that feminist. It would not be difficult at all for the movie to fix the problems that I’ve brought up. Give the girls sensible clothing and maybe skip the wet t-shirt party and the naked lady on the tower. Make the sexy wives a little less passive, and rescue the less attractive women too. The fact that these problems were not fixed, and are generally not even being acknowledged, is troubling.

It’s an awfully sad statement about the state of feminism in popular culture that people think that Mad Max is what feminism looks like.