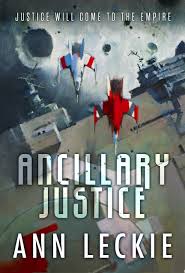 I wasn’t really sure what to expect going into Ann Leckie’s “Ancillary Justice”. All I knew about it was that it had been winning just about every sci-fi award out there, it was in the subgenre of military sci-fi, and that it did some interesting things with pronouns.

I came very close to not finishing this book. I found the beginning to be extremely slow, to the extent that I often found myself nodding off, even when I was reading in the afternoon instead of before bed. I’ve heard it said that the greatest sin an author can commit is to bore the reader: readers will put up with all sorts of emotional abuse (see also: Game of Thrones) but boredom is the death knell for a book. I find that my tolerance for novels where the only motivation to keep reading is to figure out what is going on is waning as I get older, and in this novel nothing really happens until about a third of the way in, and I didn’t really understand the main character’s motivation until closer to 50%. To be honest, I would have given up on Ancillary Justice if it hadn’t won All the Awards. The only reason I stuck with it is that I wanted to see if it ever got better, or if I was really that out of touch with what SFF fandom likes.

Thankfully it does get better once the story actually begins. Now that I have finished the book, I see that all that early stuff is relevant, and provides the foundation upon which the rest of the story is built. It’s just that while reading much of the beginning of the book I didn’t know or care what was going on.

The central idea for the novel is pretty cool. In this far future universe, space ships are powerful artificial intelligences, and they are crewed by a combination of normal autonomous humans and “ancillaries” which are human bodies that are controlled by the AI. The main character of this novel is one of these AIs, so to add to the confusion at the beginning of the novel, not only do we not know what is happening or why we should care, but the point of view is very very odd. It’s actually a rather clever way of having what amounts to a first-person omniscient narrator: from sentence to sentence and paragraph to paragraph, the POV jumps from one ancillary body to another, so you end up with multiple conversations with multiple people in multiple locations happening at once. Or simultaneous descriptions of what is happening inside a building, and out on the street, and across town. I actually thought this was pretty cool even if it was hard to follow at times, and when, at one point the connection between the main character’s various bodies is severed and they are left as a collection of individuals, the shift from near-omniscience to regular old first person is suitably jarring.

Once the plot gets rolling, the book is better, though I still found myself confused more often than I like. I won’t get into the details of the plot other than to say that it’s your basic revenge plot, with some interesting twists.

I have to take some time to talk about the pronouns though. Throughout the novel, the main character refers to everyone as “she” except for a few rare cases where the main character is speaking in a different language. The idea is that the primary language of the empire does not make any gender distinctions. This is far from the first science fiction novel to play with pronouns like this, but I think it’s the first novel in a while to do this and also become extremely popular. I was not surprised by the pronouns in this book, because they had been causing a buzz in fandom since it came out. To be honest, my first reaction to the constant use of “she” was annoyance. Not that the female pronoun was being used, but because I couldn’t accurately picture the characters. But then that leads to the question: why do I care whether this character is male or female, if the society in which they live doesn’t care? A society like that would not have all of the other visual signifiers of gender that we take for granted so it doesn’t really matter what characters look like. In some ways it would have made more sense to use a new word that does not connote maleness or femaleness: that would be more consistent with a language and culture that doesn’t distinguish. But then using a made-up pronoun all the time in a book written in English might have been just as distracting.

I eventually got used to everyone being called “she”, but because my brain has spent its whole life in cultures where it does matter whether someone is male or female, and because the word “she” in English denotes female, I ended up giving up on trying to figure it out and just pictured this as a novel populated entirely by women. That doesn’t bother me, I just know it is not accurate, because in the rare cases where the narrator switched to a language that does distinguish, some characters are called “he”. In the end, I think my feelings on the pronouns in this book are that I found them annoying, but in a good way. They made me think about some of my cultural defaults, which is a healthy thing to do.

So my overall thoughts? It was ok, and I might give the sequels a try: I suspect they won’t start off as slow because less time will need to be devoted to explaining how ancillaries work and setting up the events that eventually set the plot in motion. I am surprised that this book has won so many awards. I found it to be very slow to start, and once the plot was rolling along it was ok but not great. The idea of AI-controlled ancillaries is pretty cool, and the unusual pronouns were mind-bending in a good way, but the novel has an unfortunate tendency to force the reader to turn the page to make sense of what has already happened rather than turning the page to find out what will happen next. Personally, I much prefer the latter.