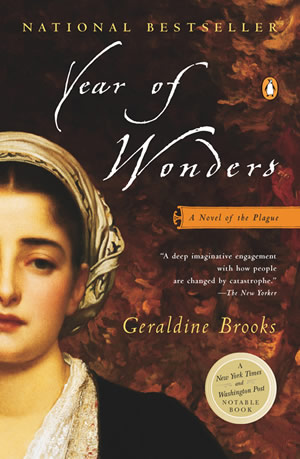 It’s not as if I didn’t know what I was getting into. The subtitle for “Year of Wonders” by Geraldine Brooks is “A Novel of the Plague”, and I read some reviews before plunging in, so I was ready for lots of death. I think what threw me off was the title, which seems to promise good things amid the horrors of the plague. I don’t think it gives too much away to say that this novel is lacking in “wonders” and rich in terrible things, above and beyond even the plague.

The premise is this: in 1665 a small town of ~350 people in England is infected by the black plague, and the town rector convinces the people that instead of fleeing to relatives in other towns, they should protect the neighboring villages by quarantining themselves, cutting off all contact with the outside world and dealing with the plague as best they can. The main character is Anna Frith, servant to the rector and his wife, and as the book progresses she becomes close friends with them and learns a great deal about caring for the ill. She grows more confident and skilled even as she is surrounded by loss and grief.

The writing in this book is very good, and the historical details are excellent, touching on everything from herb lore to religion to lead mining. Brooks does an especially good job of introducing the reader to the various characters of the town, which makes it awful to read of their gruesome deaths when they are stuck by the plague. I read plenty of fiction rife with death, but it is rarely delivered in such unflinching detail and it is easy to become numb to it. That is never the case with this book. The writing is so skillful and detailed in its description of burst plague sores and maggoty bodies and entire families wiped out in days that it is difficult to read at times.

With such a dark topic, I had hoped that the “wonders” in the title might allude to moments of joy or comic relief even during the darkest times. But other than a healthy birth here or there, and the friendship between the main characters, scenes not dealing directly with plague victims often dealt with all the other madness that comes when uneducated superstitious people  are subjected to something like plague. Witch hunts leading to unjust murder, Anna’s drunken and abusive father charging exorbitant prices to dig graves for families before the sick person is even dead, death by self-flagellation, men trying to steal a little girl’s rights to her father’s lead mine after her entire family has died, the wealthiest family in town fleeing the plague and leaving their servants homeless and penniless, the book is unrelentingly depressing. Even the backstories of the main characters, from long before the plague strikes, are awful to hear.

I’m conflicted because all of these depressing things are told very skillfully. As I said, the writing is very good, and normally I would enjoy a book more for that reason. My main complaint about the writing is the ending. I won’t give it away, but there is a twist at the end that seemed very strange and spoiled what seemed to be the hint of something positive at the end of a long dark tunnel.

So, the bottom line for this book is: it is full of great historical detail and skillful writing, but it is relentlessly depressing. This is not something you read on the beach for a fun bit of escapism. It was even darker than I thought it would be, going in well aware of its subject matter. Still, it’s a vivid and memorable story about the black plague and how it affects the people of a small town, and I will not forget it anytime soon. Despite the depressing nature and strange ending, I would say that it is worth reading. Just go in aware of what you’re getting into, and have something lighthearted at hand to read or watch when you need a break. And be thankful you live in a time with antibiotics.

PS – I should also note that I listened to the audiobook, which was read by the author. Sometimes authors reading their own book can be bad, but she was actually a pretty good reader. For just plain narration she sounds a little boring, but she did the emotional inflection of dialogue quite well. Her voice is very similar to that of Anna from Downton Abbey (Joanne Froggatt), and with the main character named Anna, I was constantly picturing the Downton Abbey character.