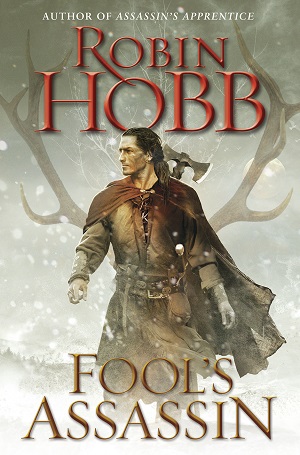 Of all the epic fantasy series I’ve read, Robin Hobb’s Farseer books are among my favorite, and that’s primarily because of the great job that Hobb does getting the reader inside the main character, FitzChivalry’s head (for better or worse). The previous books follow him from being a young boy struggling to survive court intrigue, to a trained assassin working for the king, to a battle-weary man seeking solitude after a life of trauma and loss. I was surprised to hear that Hobb was coming out with a new Fitz trilogy since his story was pretty clearly finished, but at the same time I was excited to spend some more time with Fitz and the other characters from past books.

Warning: It’s hard to discuss this book without spoiling anything. I’ll keep the spoilers mild but you have been warned.

Fool’s Assassin starts with Fitz in late middle age, enjoying a peaceful retirement with his wife Molly. The book moves slowly, but the writing was good enough to keep me turning the page as the reader is brought up to speed on some of Fitz’s past exploits and his current situation. Although they both had thought she was too old, Molly announces that she is pregnant. After a long section where Fitz believes Molly has become demented rather than pregnant (my first reminder of the downside of being inside Fitz’s head: he is all too often oblivious to major plot points when it is convenient for him to be so) she eventually does give birth to a tiny but healthy daughter, Bee. Everyone assumes Bee won’t live long because she is so small, but other than her small size she turns out to be healthy, capable, and smart. She’s just shy and a bit odd. When Molly dies suddenly, Fitz is left to raise Bee himself.

About halfway through the book, the point of view chapters start to alternate between Bee and Fitz, and much as I have enjoyed the previous Fitz books, I found myself dreading Fitz’s chapters and looking forward to Bee’s. Fitz has the habit of throwing himself long, elaborate pity parties in his head, and the reader gets to come along for the ride. There is some nice writing in here about dealing with loss of a spouse (Hobb writes poignant and bittersweet very well), and the challenges of parenting, but Fitz still tends to be a downer.  And as this book progresses, his tendency to be wrong about everything just to add conflict to the plot got to be really annoying. Bee on the other hand is everyone’s favorite point of view character type: smarter than she seems, constantly underestimated by everyone around her, clever but flawed enough to be interesting, with hints of extraordinary abilities that even she does not fully understand. (Actually now that I think about it, she reminds me a lot of Bean in the Ender’s Game books.)

The book continues on, with other new (and often highly annoying) characters introduced to add conflict, but unfortunately the plot does almost nothing, and that ends up being my biggest criticism. This is not a finished book, this is the first act of a book that has been split into three pieces so it can be released as a trilogy. There’s a lot of filler here and not much plot, and what plot there is has some pretty significant holes in it that I won’t go into to avoid major spoilers. The writing was still good enough that I found myself staying up late turning pages, but in the end all this book gives is the inciting event for the real story. I’ll be reading the sequels, but if I had known how unsatisfying this one would be I would have waited for all three books to be out first.