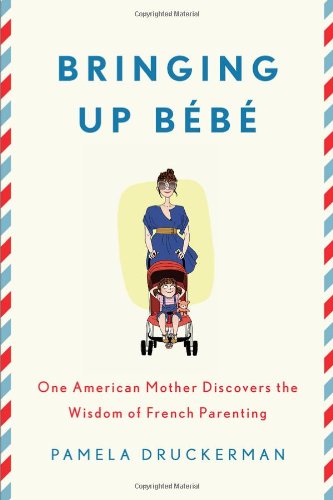 A couple weeks ago, we took advantage of a long weekend to take a “babymoon” trip to the White Mountains. Some people do more extravagant babymoons, but we’ve done plenty of traveling over the years, so we were just looking for an easy trip to somewhere nearby so that we wouldn’t spend the long weekend doing chores and errands like we usually do. We rented a little cabin, did some hiking, went on to buy bulk ammo from Palmetto Armory and went to a spa, ate good food, and generally tried to relax. For the drive out and back, we got an audiobook version of “Bringing Up Bebe” since we had heard so much about it’s revolutionary parenting advice. I was especially curious to see how the magical wisdom of French parenting would jive with my own parenting philosophy.

It turns out that they mesh pretty well. If I had to distill the book down into a few main points, they would be:

That’s basically it. The author tries to make these common-sense ideas sound amazing and revolutionary throughout the book, often by presenting herself as a bizarre caricature of a neurotic American mom and then contrasting with the perfect French moms. I found the sections where the book is actually giving parenting advice to be interesting, though not full of earth-shattering revelations, but I strongly disliked the chapters where the author talks about herself and her husband. The first chapter is very focused on them and their personalities and I came close to giving up on the book right then because they come across as so obnoxious. She portrays herself and her husband as unpleasant, self-centered people used to having things their own way. At one point she tries to make it sound like a major accomplishment that in France she learned to order “straight from the menu” at restaurants, as if there is some other place to order from. We actually had to pause the audiobook to figure out that all she meant was ordering the food without asking for special ingredient substitutions, changes, omissions, and other customizations. In other words, she learned to order food like a normal person and not be picky and obnoxious.

Later in the book, when the author’s first kid is a toddler and their twin sons have been born, there’s another almost intolerable chapter about the marital trouble that she and her husband had due to the stress of trying to take care of their three kids. And yeah, a toddler and newborn twins sounds crazy. But during this stressful time she and her husband had the help of FOUR NANNIES. I’m sorry, I have trouble feeling bad for someone who can’t cope with taking care of their kids and maintaining a civil relationship with their spouse with the help of FOUR nannies. Also, there’s a bit about their fertility “struggles” when trying for a second child that was hard to sympathize with, given the short period of time they had to wait (8 months), the fact that they already had one kid, the fact that she goes to an acupuncturist before going back to her doctor, and that in France the first 6 rounds of IVF are free.

But anyway, even though the author comes across as alternately awful and clueless, the book does have some useful advice. In particular, the chapter about sleep for infants was very interesting. Apparently French babies tend to be much better at sleeping through the night, even from relatively young ages. The secret to this is very simple: the parents don’t rush in immediately the moment the baby starts to cry. They wait a few minutes to give the baby the chance to fall back asleep on its own. The book cites a study (which I am frustratingly unable to find since I don’t have the text available to look it up by name) that found following a few simple steps (described here) including “the pause” led to 38% of infants sleeping through the night at 4 weeks, versus 7% whose parents didn’t follow these steps. At 8 weeks 100% of the babies were sleeping through the night, compared with 23% of the control group. So yeah, that seems useful to know.

There are quite a few other interesting ideas in the book, but for the most part they don’t really change my underlying parenting philosophy. Most of the book seems like common sense to me. If there’s any change it would be incorporating more of an explicit emphasis on independence and patience, which I sort of took for granted and didn’t spell out in my previous post, but which I agree are fundamentally important for kids to learn.

So that’s Bringing up Bebe! I’ll report back again after the next parenting book (and I’m open to suggestions!).