Double Book Review: A Song for Arbonne and Hounded

Phew, it’s been a busy month (ok, still busy. This post is brought to you by insomnia!). But I did manage to finish two novels: one I had been working on for a while, and one that was just a quick read. 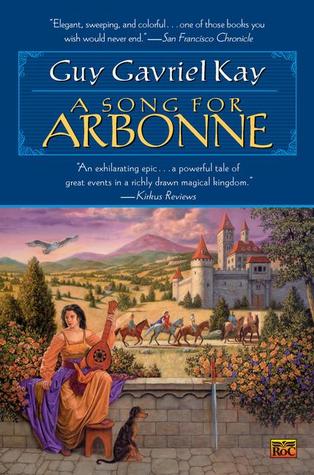 A Song for Arbonne by Guy Gavriel Kay is the one I was working on for a while. I started listening to the audiobook over the summer, but then someone else at the library put a hold on it so I couldn’t renew it for a while. I’ve had mixed success with Kay’s books in the past. Most of his more recent books are “alternate world historical fantasy”: they are minimal or non-magic settings modeled after actual historical settings, but in a made-up world which give a little more leeway than true historical fiction. This is actually the sort of style I have gravitated to in some of my own writing, and Kay is one of the only authors who writes in this style regularly. However, Kay’s earlier books (The Fioinavar Tapestry series) are more traditional fantasy worlds borrowing heavily from Narnia and Middle Earth. I really did not like his first book like this, The Summer Tree.

So I wasn’t sure what to expect from A Song for Arbonne. It turned out to be a sort of middle ground. It is set in a fantasy analog of medieval Europe, specifically drawing on Provence. It has some magic, but not a lot. The kingdom of Arbonne is the main setting, and it’s an interesting take on traditional High Fantasy. There are tournaments and sword fighting and everything, but Arbonne is a matriarchal kingdom that highly values music, and troubadors and singers and the like are held in very high esteem. The story focuses on Blaise, a knight from the hyper-masculine and militaristic neighboring kingdom of Gorhaut, who has left his home and is serving as a sword for hire. Unlike a lot of fantasy, A Song for Arbonne is much more focused on courtly intrigue than violence, though it has its fair share. Much of the book involves barbed exchanges between various nobility vying for power rather than open combat.

A Song for Arbonne is a slow burn: it takes patience as Kay builds up the intricate and complicated relationships between the various characters and nations, but I really enjoyed it. It’s sort of like a less gritty Game of Thrones, somehow finding the sweet spot and managing to depict a lovely and idyllic medieval kingdom while still having lots of interesting intrigue and enough danger to make for a good story. It also has the notable distinction of being a stand-alone fantasy novel, which is almost unheard of.

Also, I would highly recommend the audiobook. The narrator is excellent, and given that Arbonne is so centered on musicians and troubadors, there are lots of songs in the book. The reader for the audiobook is also a really fantastic singer, and I found myself looking forward to the little bits of song scattered throughout to book just to hear him sing. The wuality of the narrator can make a big difference with audiobooks, and Song for Arbonne has a good one. 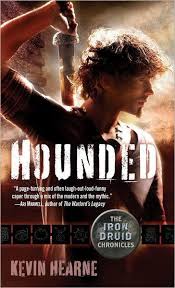 The other novel that I recently finished was Hounded by Kevin Hearne. I picked this up because I follow the author on Twitter and he seems like a funny and cool guy, and because it’s an urban fantasy set in Phoenix, which is kind of a neat change. Unfortunately, I did not like it very much: it’s just not my kind of book.

The premise is that Atticus O’Sullivan is a 2100 year-old druid who has settled down in Tempe to avoid his nemesis Aengus Og, one of the pantheon of celtic gods. But, as we learn from a succession of sexy goddesses, the bad guys (Aengus Og, some disposable mythological henchmen, and a coven of gorgeous witches) have finally found Atticus and he is forced to confront them with the help of his friends, the local werewolf pack, a vampire, and the sexy barmaid from the local Irish pub (who also happens to be possessed by a powerful witch from India).

In case you couldn’t tell, it’s a pretty silly book. Which is fine, humorous novels can be good, but my problem with Hounded is that it’s also incredibly shallow. There’s nothing there under the surface. The writing feels padded and vacuous: an interesting turn of phrase is never used when the most obvious one could be used instead. The worldbuilding is nonexistent, just a mashup of mythologies. It’s also a blatant male wish fulfillment fantasy (what guy wouldn’t want to be a sexy immortal spell-wielding druid who has a talking dog and gets to sleep and/or flirt with a succession of beautiful and sometimes dangerous women and goddesses while handily dispatching your enemies with a magic sword that can cut through anything?) and not much else. A 2100 year-old druid who has witnessed all that history could be a fascinating character. What sort of wisdom would living that long bring? He’s traveled the world, witnessed the rise and fall of empires and cultures, fought in countless wars. He has also outlived every mortal friend he has known. And yet, there’s no depth to his character: he mostly just makes wisecracks and sleeps with goddesses. I’m not saying he’s not allowed to have a sense of humor, but I guess I would have also liked a little more pathos/gravitas with someone who has lived so long and seen so much.

The other problem is that there are basically no stakes. Atticus already has magic that makes him immortal in terms of dying of natural causes, and early on in the book he makes a deal with the celtic goddess of death so that he won’t die even if mortally wounded. So who cares if monsters attack him? He can’t be killed, and he can heal himself almost immediately as long as he can draw energy from the earth. His sword can cut through anything, and he has a variety of spells they he can cast, along with a bunch of very powerful friends. With almost zero risk and almost unlimited power, action scenes become pretty boring.

And finally (some spoilers below), there is a scene about halfway through the novel that involved a police officer, possessed by Aengus Og, shooting Atticus and in turn being gunned down by his fellow officers for shooting an unarmed (white) man. The author could not have forseen how poorly this scene would hold up over time, but given the countless police shootings of unarmed black men in the news lately, reading about how these cops immediately shot one of their own because he shot a civilian (so unthinkable!) was… awkward. (This also reminds me: the book is full of scenes of blatant magic use in the presence of normal people, and they invariably don’t care at all. At one point Atticus decapitates one of Aengus Og’s henchmen in the front lawn of a friendly old Irish lady, and she is briefly horrified until he explains that the bad guy was British, at which point she basically shrugs and says “ok, good job then”.)

Anyway, plenty of people seem to like Hounded and the other books in this series, but it was decidedly not for me. It was like the book equivalent of a brainless summer blockbuster. Entertaining, but mostly an exercise in wish fulfillment with lots of exciting action but no substance. Like cotton candy, it tastes good, but you quickly realize there’s nothing actually there.