Another week, another Game of Thrones recap and review! Spoilers ahoy! 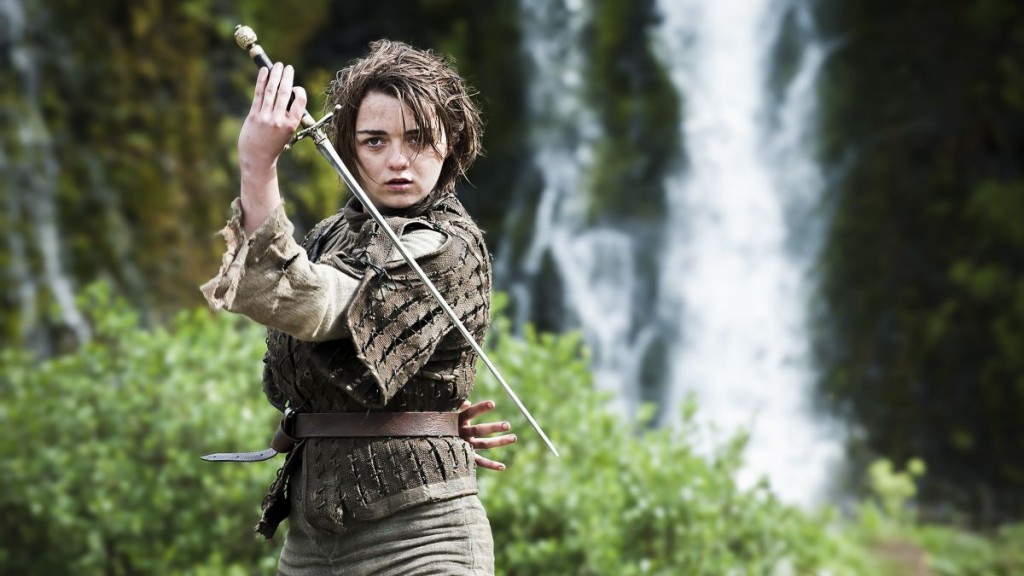 This week we started off with Tommen’s coronation which quickly became a very tense scene between Cersei and Margery. Most interesting was Cersei’s admission that Joffrey was a monster and Margery’s very careful navigation of that minefield. The scene ends with Margery reminding viewers that Cersei is set to marry her brother Loras, making Cersei Margery’s mother in law and sister in law. Not quite incest I guess, but certainly weird.

Across the narrow sea, Danaerys is struggling to decide what to do next, especially given the news that Joffrey is dead. Daario has apparently captured some ships, enough to sail about 10,000 soliders across the sea to assault King’s landing, but Jorah points out that, since that’s barely enough to take King’s Landing, that certainly isn’t going to be enough to take a whole continent. He also informs Dany that those cities she liberated? They’ve devolved into chaos after she created massive power vaccuums by killing the masters and freeing the slaves. Surprise!

In the books, Dany’s story line dealing with trying to actually rule the cities that she has captured gets to be a bit slow and boring, but I am hoping that this might actually translate well to the screen, and at least the intrigue will be a nice change from the now-repetitive slave-freeing scenes.

We get a short scene with Arya and the Hound, with Arya going through her To Murder list and ending with… The Hound. Later, we check back in with them and get to see Arya practicing with her sword and looking generally awesome. The Hound interrupts her and makes fun of her “poncing about,” and then goes a step too far and insults Syrio Forel. He challenges Arya to stab him and show what she has learned, but apparently she didn’t remember the part that Syrios must have taught her about how, when fighting with a slim blade like needle, you don’t stab a dude right in the middle of his breastplate. Because then he laughs at you and backhands you to the ground. The whole point of Syrio’s epic death scene was that even with a wooden blade, he was deadly because he knew how to aim for the weak points in a knight’s armor. I guess Arya will remember that now?

We get a couple of scenes with Cersei chatting up two of the judges in Tyrion’s upcoming trial. With Tywin, they discuss the schedule and necessity of the upcoming marriages with the Tyrells, and there is a lot of emphasis on the vast sums of money that the Lannisters owe the Iron Bank of Braavos. I get the feeling this is going to play a more prominent role in the show than it did in the books, likely because the show is less constrained in terms of which points of view it can show. Unfortunately, this looks like it is going to give us our first glimpse of Braavos way before Arya makes her way there. Cersei and Tywin make a show of how they can’t possibly talk about the upcoming trial, but then Cersei talks about the trial and leaves.

With Oberyn, we’re reminded that: Hey, Cersei has a daughter too, and she’s been in Dorne with Oberyn’s family for quite a while now. Cersei makes a big show of how much she misses her daughter, which is in character: for all her faults, Cersei does love her children. But this also can be read as a ploy to get Oberyn’s sympathy for the loss of her son in the upcoming trial. Of course, in this scene we’re also reminded that the Lannisters murdered Oberyn’s sister. For some reason he still seems to be upset about that…

As expected, the scenes in this episode between Pd and Brienne are great. This show does odd couples really well, and Pod is hilarious as he fails at all the practical skills like riding or cooking that he never had to learn while serving as a squire for Tyrion. But of course, once he reveals that he also saved Tyrion’s life by killing one of the Kingsguard who gave Tyrion his famous scar, Brienne warms up to him.

Sansa and Petyr have arrived at the Eyrie, blowing past the brief stay at the Petyr’s birthplace in the Fingers that is in the books. We promptly see that, yes, Lysa is still nuts and her son Robin is still rather too attached to mother. Oddly, the show decided to have Littlefinger call Sansa his niece rather than his daughter. I’m not sure if there’s any significance to that change.

But let’s talk for a moment about a very significant change: Lysa’s confession. In the books, the truth that Lysa murdered her husband Jon Arryn under orders from Littlefinger is the bombshell revelation that is the climax of the final chapter. Because really, it’s a huge revelation. Littlefinger is behind everything that has happened so far. That one murder set off the whole chain of events leading to Ned being chosen as hand, being killed, triggering the war of the Five Kings, etc. And of course, in the books, Littlefinger rids himself of Lysa after marrying her, now that her part in all this is played out.

In this episode of the show, they instead made the baffling decision to drop this huge bombshell of a plot point into a brief conversation between Lysa and Petyr. This is a textbook example of “As you know, Bob” exposition, something that is a writing 101-level no-no. You never ever ever have two characters tell each other something that they both already know, just to inform the reader. Why? Because it comes across as really fake! Because why would they be telling each other something they both know? And for heaven’s sake, don’t use this to deliver information that has mind-blowing consequences for the plot! For some reason, HBO took what is the climax of the third book, the best book in the series, and awkwardly shoved it into the middle of a mediocre episode in a poorly-written scene that was mostly an excuse to remind us how crazy Lysa is? I’m just… really disappointed in this change. The book scene had so much impact, but instead we get this, where new viewers barely even register what they’ve just been told. I just don’t know what the writers were thinking.

Speaking of which… we wrap up the episode at Craster’s keep. Bran, Jojen, Meera, and Hodor are locked up in a shed, and Locke spots them but doesn’t tell Jon. Instead he tells the knight’s watch guys to avoid that shed because it has a bunch of dogs in it. Jon announces that they will wait until night and then attack.

This conveniently allows some time for Jojen to have some weird visions, telling Bran that he must keep heading north at any cost and find a giant weirdwood tree so he can meet the three-eyed raven. And then Karl and his thugs burst in and decide to chain up Meera and threaten to rape her. Because it’s not possible to be a strong female character on this show without being threatened with rape. Remember when we first were introduced to Meera, and she was a badass, confident and skilled with a bow and a sword? How she was the fighter, who protected her brother instead of vice versa? Well, now she is the obligatory damsel in distress in this scene. Sigh. Anyway, Jojen manages to creep Karl out with talk of his visions long enough for the knight’s watch to attack and force Karl et al to run off to fight them.

During the battle, Locke shows up and abducts Bran, but in a move everyone saw coming, but everyone was cheering for anyway, Bran wargs into Hodor, busts free from his shackles, and then crunches Locke’s neck. (Someone elsewhere online pointed out that ironically, this means that Bran, who was crippled by Jaime, end up killing the man who crippled Jaime).

After escaping, Bran wants to go meet up with Jon, but Jojen tells him that they must go north instead because of Reasons (what he can’t say is that they have to go north because otherwise it would break the plot beyond repairing). So Bran and friends head off into the woods while the battle wraps up.

Jon of course has to have a confrontation with evil Karl, who is evil. They have a dramatic fight, and Karl lasts improbably long considering he’s using knives against a guy with a hand-and-a-half sword. Jon is on the ground, about to be stabbed, when one of Craster’s wives stabs Karl. Karl tries to go after her, but then Jon stabs him through the back of the head, with the blade emerging from his mouth in a gratuitously nasty shot. Now, I’m no expert in weaponry or human anatomy, but I do know that skulls are pretty hard, and the way Jon slowly pushed his sword through Karl’s head seemed more consistent with a sword going through a watermelon than through a bunch of bone. Also, I’m no expert on swords, but it seems to me if you wanted to dispatch a guy kneeling on the ground with no helmet on, you would slice, not stab, his head. This would certainly have fulfilled HBO’s blood and gore quota (which they had to amp up because there was miraculously no way even HBO could come up with of having nudity in this episode) and make a lot more sense.

We also get a brief and completely predictable scene showing… Rast? I think that was his name, fleeing the battle only to be killed by Ghost. Apparently Summer was set free as well but he is nowhere to be found. Ghost reunites with John, and everyone is happy, and impressed at how much the CGI for the wolves has improved.

So that wraps up the completely original Craster’s keep storyline. And  now it is clear that this little arc was purely filler, designed to add some action and give Jon and Bran something to do in the middle part of this season. For all the excitement, nothing actually happens: Bran and friends are still headed north. Jon and his friends (at least, the ones who are named characters and not bad guys) are all alive, and have to go back to the wall to face the wildlings and the upcoming elections for new Lord Commander. Craster’s wives are free now, but they don’t factor into the plot at all after this. So yeah, filler.

I guess I’m actually ok with some filler, and I suspect we may be seeing more of this as the show tries to drag its heels a bit and give Martin time to write more books. But at the same time, I wish they would pad things out by drawing from the books. There’s plenty in them that could be adapted for the screen and not feel as fake as the completely made-up Craster’s keep arc. I think I read somewhere that the third book is roughly long as the full Lord of the Rings trilogy! Let’s see some more of that in the show!