I realized last week that, as someone who does reviews and is a big fan of Game of Thrones, I should really be posting reviews of each week’s episode. So, Here we go, starting with the third episode of this season: “Breaker of Chains.”  Warning: here be spoilers! 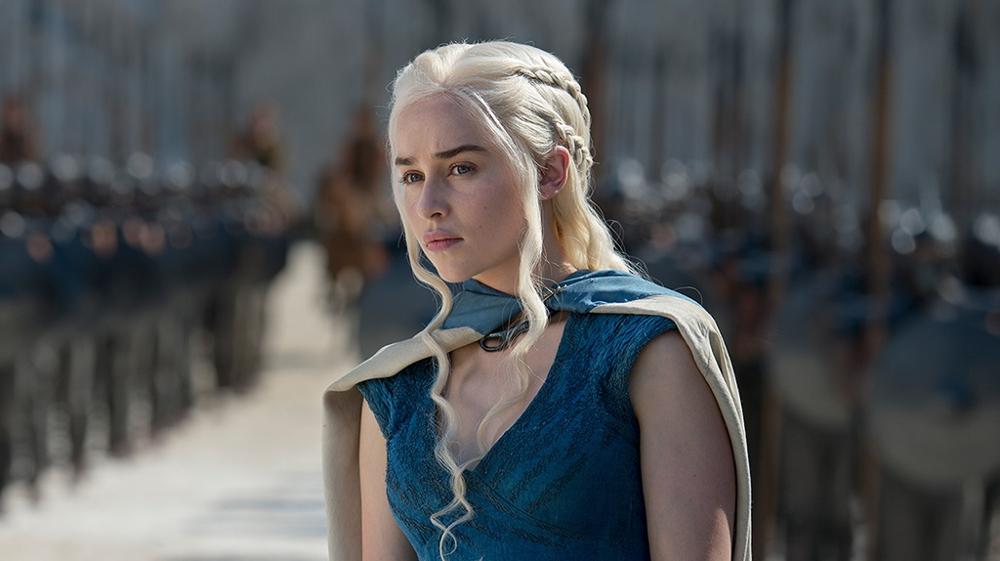 So. Last week Joffrey kicked the bucket and this week we begin to see the aftermath. I was expecting the showrunners to make it clear that the murder was coming and who was in on it, to build suspense by giving the audience information that the characters don’t have, a la Hitchcock’s famous example of the bomb under the table. But I like what they did instead even better. Leaving it ambiguous, with so many suspects, makes the suspense last a lot longer, and gives viewers who haven’t read the books the fun of guessing whodunnit.

This week’s episode starts with Tyrion being arrested, and Sansa’s escape, which was done well. I liked the touch with the necklace, giving non-book readers another hint as to its significance. Gems, and even glass, don’t normally shatter that easily.  Also, let it be noted that Littlefinger as always is a creeper. I’m still not a fan of the weird growly voice they gave him in the show, but it’s way too late to change that.

Next, we see Joffrey’s wake, where he is looking mighty creepy with those eye-stones. I enjoyed Tywin’s lecture to Tommen (non-book-readers: remember Tommen? He’s suddenly important!), particularly because it was also a lecture to Cersei, basically saying: “You messed up with Joffrey, I’ll take over from here with Tommen. PS: Tommen, has your mother explained where babies come from?”)

I liked that part of the scene. I even liked when Cersei demands that Jamie kill Tyrion, because it shows (a) how messed up and paranoid she is, and (b) how conflicted Jamie is. But then for some reason he rapes her, which is… rather different than the (mostly) consensual crypt-sex in the books, and casts Jamie in a very different light. He’s already an incestuous dude who pushed children out of windows, so I get that he is still a terrible person, but we were in the process of coming to sympathize with him against our better judgement. This is something that Martin does really well in the books, taking bad guys and making you sympathize, and taking good guys and making them unlikable. But I have to say, showing Jamie raping his sister in a church next to the body of his dead son makes it pretty hard to redeem his character. The audience is not going to sympathize much with him now, are they? It will be interesting to see what the show intends to do with this. I hope they did it for a very good reason.

Aside from the plot ramifications for the show, I can’t see how this was a good move for HBO considering the abundant criticism of the books and the show for their misogynistic tendencies and heavy use of rape. Deliberately changing the story to add in the rape of one of the more prominent female characters shows a disturbing level of ignorance about the ongoing discussions of sexism and rape culture in modern media and particularly in sci-fi and fantasy. (This article from A.V. Club deals more eloquently and in greater detail with the show’s tendency to turn sex scenes from the books into rape scenes in the show, and its implications)

Speaking of HBO’s misogyny issue: later in the episode we got some more gratuitous nudity in the brothel as Tywin walks in on Oberyn in the midst of an orgy. At least there was some minor male nudity to even things out this time, but still. I’ve said it many times: almost every episode HBO deploys some gratuitous nudity and/or violence just because they can, not necessarily because they should. Otherwise though, the conversation between Oberyn and Tywin at the brothel was an interesting confrontation that we don’t get to see in the books, which is something that I appreciate about the show.

The episode also returns to everyone’s favorite odd couple: Arya and The Hound. They somehow manage to serve as comic relief even as they do terrible things. This week the comedy comes from Arya claiming the Hound is her dad and then reacting with silent astonishment as he decides to work for a fair wage for the poor farmer the encounter. The terrible part comes pretty quickly though: the Hound knocks the farmer out and steals his silver. Again: a character who started out as a bad guy, became more sympathetic, but now seems to be headed back toward baddie territory by revising his personal code to permit robbery.

We also check in with Sam and Gilly at the wall in a wonderfully awkward few scenes as he tries to protect her from his fellow men of the Night’s Watch, many of whom are “rapers”, but can’t bring himself to say that he is interested in her. Unfortunately for Gilly, Sam’s version of protecting her involves shipping her off to Mole’s town rather than, you know, actually being willing to confront any of his brothers in person if they try to do anything inappropriate.

Jon’s story line at the wall looks like it is going to be doing some ad-libbing, with a possible foray beyond the wall to get rid of the rebellious Crows who murdered the lord commander and took over Craster’s keep. This doesn’t happen in the books that I recall, and I suspect it is just to give Jon something to do until the battle at the wall happens. But I guess we’ll see how this plays out.

Next stop: Stannis and Davos at Dragonstone, where Stannis is happy to hear that Joffrey is dead (thanks to Melisandre’s leech-magic, he believes), but less than happy that he is lacking an army or any money. Davos goes from Stannis to Shireen for his reading lesson, and we get a fun scene between this adorable odd couple (the show seems to really enjoy these odd-couple pairings, and I can’t complain, they work). I like’s Davos’ quip that the difference between a smuggler and a pirate is that if you’re a smuggler and everyone knows your name, you’re not very good at your job.

Shireen’s book-of-the-week inspires Davos to get the money needed for Stannis to hire an army by borrowing from the Iron Bank of Braavos. I’m pretty sure the Lannisters have also been borrowing from the iron bank, and I’m sure nothing terrible will befall whoever fails to repay the bank when the time comes.

Back in King’s Landing, Tyrion is locked up, and has a sad scene with Podrick, where he essentially orders Pod to testify against him, figuring that it’s best not to take the boy down with him in the ongoing fiasco. The scene, much like the one in the book, helps to reinforce just how hopeless Tyrion’s situation is. Basically the only person he can turn to is Jamie. In the show, even Shae is gone, but somehow I suspect she will make a shocking appearance at the trial, which, by the way, is going to be an awesome episode.

The episode wraps up with Dany doing her thing at Meereen. The duel between the Meereenese champion and new-Daario was fun, but as a book reader I couldn’t help but miss Strong Belwas. Oh well. Dany gives a nice speech and then launches barrels of broken shackles into the city, presumably inciting a slave rebellion.

The whole Dany-frees-the-slaves story line has a rather uncomfortable “white people save brown people” thing going. Notice that all of the most important characters in Dany’s storyline are white? And how the slaves are not even a single race of darker-skinned people, but are just generally brown? It’s as if the show decided that people with brown skin are interchangeable, but they had better not include any white people among the slaves, to make it clear that they are different from the White Heroes. This is another issue that has been with Game of Thrones since the first season and has been discussed in great detail elsewhere so I’ll just say: Yep, the show is still doing this, and yep, it’s still uncomfortable. On a related note, if you’d like to get a better understanding of the controversy over race in Game of Thrones and other fictional (and historical!) depictions of medieval worlds, I very highly recommend checking out the Medieval People of Color tumblr. It’s worth reading if for no other reason than that it demolishes the argument that a lack of people of color in medieval Europe-like settings is “historically accurate”.

And that wraps up this weeks episode. This was definitely a set-up episode for events later in the season, but I find myself often enjoying these types of episodes of the show quite a bit.  This season has been consistently good so far, which is fitting since there’s so much exciting stuff that happens in the latter half of the third book, but it’s nice to see. I’m really looking forward to some of the events later in this season, and HBO has made it quite clear that they will be sprinkled throughout the season rather than having a big episode 9 shocker like previous years. This, plus the show’s gradual departure from the strict timeline of the books, makes it fun to watch even as a book reader who technically knows what will happen, because I don’t know what will happen when anymore!