Jupiter as the Moon

Have you seen this awesome set of pictures depicting what it would look like if you replaced our moon with each of the planets? I particularly like the images for Jupiter and Saturn – they absolutely dominate the night sky: 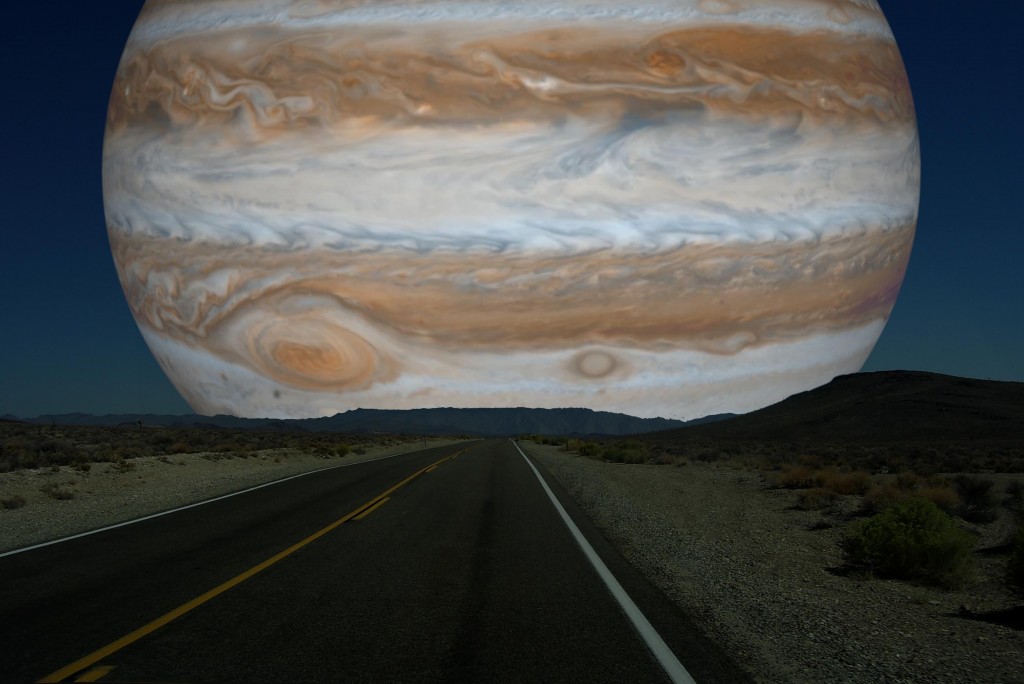 Jupiter, as it would look if it were our moon.

I always enjoy pictures like this: they are a great way to illustrate the relative sizes of the planets. But the following tweet made my skeptic senses tingle:

The tweet in question says that the Earth and Jupiter would collide if they were the same distance apart as the Earth and the Moon. it’s not that this is wrong, but that it doesn’t state its assumptions and so it is misleading. I was tempted to reply on Twitter, but this is the sort of thing that, alas, involves lots of caveats so I thought it would be better to tackle it here.

The main question is what the motion of the two planets is when you suddenly replace the moon with Jupiter. If both planets are stationary relative to their center of mass, then yeah, they’re going to collide. But the same would be true of the Earth and the Moon. If the two planets have any angular momentum at all, they will orbit their center of mass rather than simply falling toward each other. So that means that in all cases except that in which the planets start at rest, they won’t hit each other.

But not quite. Because planets have some size. If they don’t have enough angular momentum, they will follow a very narrow elliptical orbit and will crash into each other. To avoid collision, there has to be enough angular momentum for the periapsis of the orbit to be greater than half the sum of the planets’ radii. I tried switching Jupiter for the moon, but otherwise keeping the angular momentum and orbital eccentricity of the system the same and I found that the periapsis is about 4400 km (I did this calculation quickly – my numbers might be off so feel free to check me!). This is too small to keep Earth and Jupiter from colliding, so the tweet is correct, given the assumption that the angular momentum and eccentricity of the system stays the same when you swap the moon for Jupiter.

So, let’s say the system has enough angular momentum for the Earth to stay in a stable circular orbit at the specified distance. What other misfortune might befall us? One possibility is that we would be inside the Roche limit and the powerful tides from Jupiter would tear us apart. I calculate the rigid-body Roche limit for Jupiter and Earth to be ~108,900 km, which is safely less than the Earth-Moon distance.

That’s not to say the tides wouldn’t do some weird things of course. Jupiter’s tides would still be huge and so it would raise enormous tides in our oceans and in the solid rock of the Earth itself. The friction generated by these tides would heat up the Earth’s interior (and probably trigger volcanoes and earthquakes in the process) and gradually slow the Earth’s rotation until one side of the earth was permanently locked facing Jupiter (the same thing has already happened to the moon, which is why we don’t see the far side except from spacecraft).

We would also be pounded by the intense radiation of Jupiter’s magnetosphere. Correction: our orbital period around Jupiter would actually not be much more than a day, so our magnetic filed would probably survive.

So, bottom line: the tweet in question is only sort of right. Earth could stably orbit Jupiter, just not with the same orbital parameters as the current Earth-Moon system. If we were in a stable orbit, there would be some… interesting side effects, which might prove to be deadly, but nothing as dramatic as crashing into Jupiter.