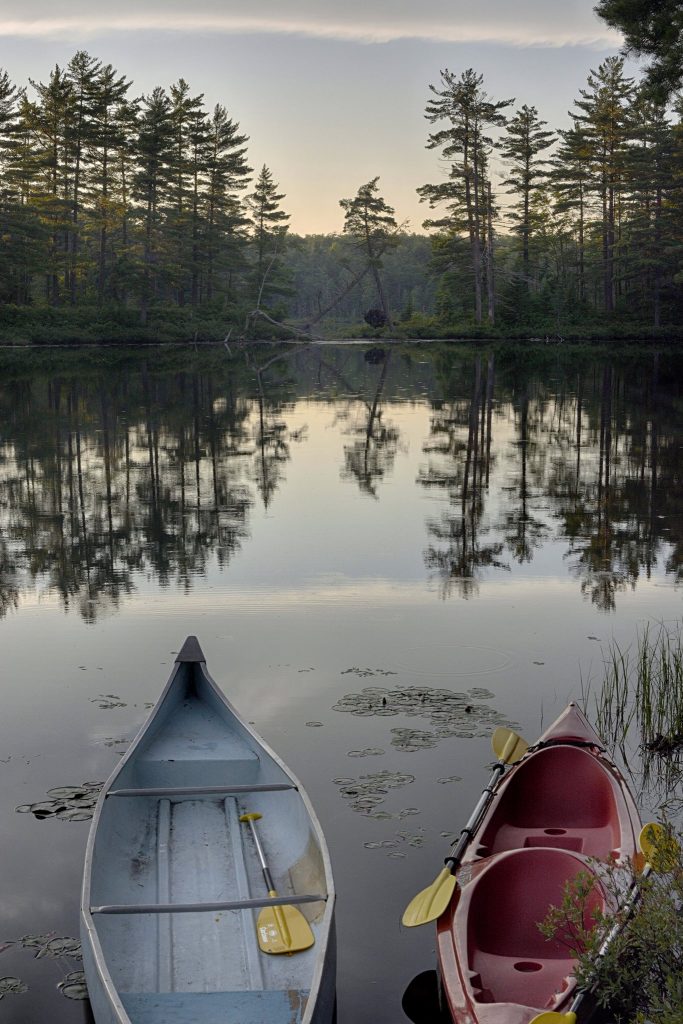 There is a cabin on a small lake in the forest in northern Michigan where I keep all my most vivid childhood memories. My family drove up there every summer (and occasional winters) from our home in the suburbs of Detroit, and I will always cherish those brief weeks off the grid, when we could leave normal life behind and spend our evenings watching campfires instead of TV screens.

This summer, I returned to Michigan for the first time in seven years and the nostalgia was almost overwhelming. A lot has happened in that time: I got a PhD, my wife and I moved across the country to Arizona, we bought a house, we settled into permanent jobs, we got a second dog, and after struggling with mild fertility issues, we had a son. He has grown from a preemie who had to spend the first twenty days of his life in the hospital learning to eat into a happy, healthy toddler who is obsessed with birds and books and will enthusiastically roar like a dinosaur on command.

It’s strange to visit my old stomping grounds with my young son. For me, every stump and rock and path and beaver lodge is a memory, and I can’t help but wonder what they will mean to him. How often will we be able to make the pilgrimage back to Michigan? When we visit, will he build his own fort in the forest and fashion wooden medieval weapons to defend it from unspecified foes? Will he have bonfires twenty feet tall and learn roast the perfect marshmallow over the coals? Will he pick wild blueberries and eat them in homemade pancakes? Will he learn to fall asleep to the haunting call of loons? Or will he be indifferent to it all, and wonder why Dad drags him to the north woods of Michigan instead of going on vacations to more interesting places?

I have always been a bit prone to nostalgia, but I’ve found that since becoming a parent, that desire to cling to the past has only gotten stronger. Children allow us to revisit our childhoods, and there’s a natural tendency to want to pass our cherished formative memories on to our kids. I grew up catching snakes and making swords out of sticks and riding four-wheelers through the north woods of Michigan, and so I want my son to have all of those experiences too.

This instinct to make my son’s childhood a highlight reel of my own extends beyond just the time spent Up North. My son is only 20 months old, but I have been debating when to introduce him to the stories that shaped me — Star Wars, The Lord of the Rings, Redwall, Jurassic Park — since before he was born. I didn’t even know what Star Wars was until sixth grade, and I didn’t read The Hobbit until early high school. I know that delaying exposure to these stories is impossible in today’s world where geek culture and pop culture have become indistinguishable, but there’s a part of me that nevertheless wants his introduction to them to mirror my own. The fact that my son’s experience learning that Vader is Luke’s father or telling riddles in the dark with Gollum will be very different from mine makes me uncomfortable in a way that’s hard to explain.

As parents, it’s tempting to assume that our children will turn out just like us. When I picture my son in high school, I imagine him loving science, playing the trumpet in marching band, and spending his free time playing video games with friends. But I have to remind myself: that’s not him, that’s me. He might turn out like that, but he might not, and that’s ok.

Kids remind us of what it was like to be young, to experience everything for the first time, but the corollary is that they also remind us that we are not that young anymore. As the saying goes, “you can’t go home again.” The world moves on and it’s important that we as parents do too.

It is a frustrating fact of the human condition that those memories that we cherish, that form integral parts of ourselves, are uniquely ours. There’s the inevitable temptation to try to model our children’s lives on our own nostalgia, to pass on those intangible parts of ourselves like a baton in an intergenerational relay, as if somehow that will allow us to return to our lost youth, but it’s important to moderate that temptation. Yes, embrace the chance to remember your own childhood. Share what you love with your kids. Give them the opportunity to experience things that were important to you, but also respect your kids enough to let them be different, to find their own passions and make their own memories.

It’s important to remind ourselves that our goal as parents is not for our kids to live carbon copies of our lives, it is to help them live their own.