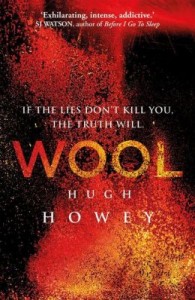 One of my favorite things is coming across a new book that I know nothing about and then proceeding to be completely consumed once I start reading, emerging days later blinking and disoriented as I am forced to reintegrate with the real world.

That’s more or less what happened with Wool. My wife and I were on a two week vacation in Peru (which was awesome) and before we left she asked friends for book recommendations. One of them suggested Wool, so we downloaded it on our Kindle and set off on our adventure.

Toward the end of the trip we started reading it in our hotel room (we read books out loud because we are unbearably adorable like that). By that point in the trip we had hit most of the main attractions in Cusco and were quite tired after almost two weeks of being adventurous. I feel a bit guilty admitting this but on our last couple of days we ended up spending hours just sitting in our room reading Wool instead of doing last-minute exploring.

Wool is a collection of five  related stories set in a post-apocalyptic world where everyone is forced to live underground in giant “silos”. It is the story of one silo starting to realize that, lurking beneath the life that they take for granted, there are some sinister forces working to maintain the status quo. As the tagline on the cover says, “If the lies don’t kill you, the truth will.”

The first story is really quite sad and dark. At one point in the first story when we took a break from reading, my wife commented on how incredibly sad the story was. But then immediately demanded that I keep reading. Because despite the dark tone, Wool is a masterful example of how to use building dread and suspense to keep readers turning the page.

The premise for the story is nothing particularly new. I was reminded very strongly of the video game Fallout 3, which begins in an underground facility where people have lived for generations to avoid the dangers of a surface world rendered nearly uninhabitable by nuclear war. However, Fallout 3 is a video game and its main concern is with setting up the appropriate ambiance for the world and then getting the player out into the unknown world beyond the door of the Vault. It is a testament to how good Fallout 3 is that a brief encounter with the Vault leaves such a strong impression, but there’s not actually much there.

Wool on the other hand is a wonderful example of science fiction worldbuilding. The action takes place (almost) entirely in the silos and details of the civilization that lives in them are doled out perfectly, making the reader constantly want to know more, but at the same time providing exactly as much information as the reader needs. No awkward info dumps in sight, just a vivid world perfectly revealed.

Of course, the stories are really about the characters and again Wool does a great job. The stories are not sweeping epics, but instead focus closely on a handful of well-drawn characters. I was especially impressed by the careful, skillful, and realistic way in which characters falling in love is dealt with.

The limited scope, both in terms of number of characters and the enclosed, sometimes claustrophobic world in which they live, is a real strength of the stories. There are no wasted words here. The writing is really tight: everything that is mentioned is mentioned for a reason. It all hangs together incredibly well and makes for a really compelling read.

My only nitpick is that the end of the final story comes a bit abruptly. Still, it’s a small nitpick in what is otherwise one of the best books I’ve read in a long time. Check it out, especially if you are a fan of post-apocalyptic sci-fi. you won’t be disappointed.