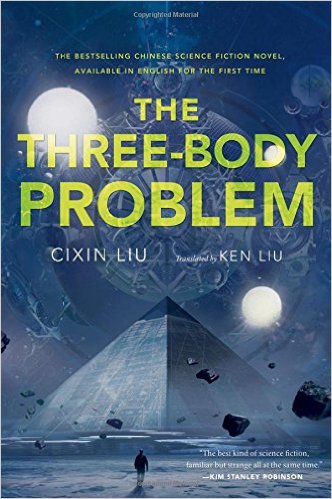 The Three Body Problem is the first novel in a trilogy  by the popular Chinese author Liu Cixin. It took the sci-fi community by storm last year, winning the Hugo award for best novel, so I thought it would be worth checking out. Also, it is always interesting to read books that have been translated into English.

The novel is set in a combination of flashbacks to the Chinese cultural revolution and aftermath, and a near-future “present”. I don’t want to give away too much of the story because part of the appeal is gradually figuring out what is going on, but I think it’s safe to say that this is a novel about first contact with an alien civilization. This novel falls squarely into the realm of “hard” science fiction: most of the characters are physicists, and they love to tell each other about physics. A major element in the novel in addition to all the physics, is a (very boring) virtual reality video game with the same name as the book.

In fact, I have to report that I found this novel overall to be pretty boring. There are some great moments that will definitely stick in my mind, but for the most part it moved very slowly and had way too many lengthy digressions about some technical concept or other. Since I have degrees in physics and physics-adjacent fields, I’m just not impressed by novels that rely so heavily on impressing the reader with how cool certain technical ideas are and how much research the author did. (Especially when the author makes some sloppy mistakes with certain details…). I’ll always prefer a compelling story about interesting characters over a lesson in how logic gates in a computer work.

I could have tolerated the lessons if the story moved faster, but it was pretty glacial, and it’s only the start of the story. It’s always a bad sign when I am startled that a book is over because it means it didn’t feel like it was wrapping up its story arcs very well. Three Body Problem doesn’t feel like a complete novel, it feels like the first third of a massive (and rather boring) novel, and that’s something that always annoys me.

Oh well. It was interesting to read a popular novel by a Chinese author, and there were moments that were great, but I don’t think I’ll be continuing the series.