Book Review: The Amazing Adventures of Kavalier and Clay 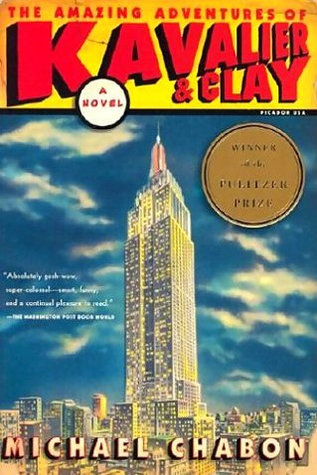 For the majority of popular authors out there, especially in genres like sci-fi and fantasy, it’s all about the plot. Prose exists to tell you what’s going on and otherwise its job is to get out of the way and try to be as “invisible” as possible. That’s why it was so refreshing to read The Amazing Adventures of Kavalier and Clay. The prose in this book is the opposite of that bland “invisible” utilitarian prose that is so common. It’s so good that it is hard to even find the words to convey it. The difference between other authors’ writing and the writing on display in Kavalier and Clay is like the difference between those sleepy ponies that give kids a nice safe ride at the state fair and a thoroughbred racehorse on a straightaway. You get so used to safe, easy, invisible prose that when a book comes along that really shows you what the English language can do, its power is breathtaking and exhilarating. Seeing it used to its full potential relieves a tension you didn’t even know was there.

There’s so much to gush about when it comes to Chabon’s writing, but one of the most noticeable things for me was the skill with which characters are introduced. Even for minor characters who are present for a scene or two, he somehow manages to deploy the perfect metaphor, the perfect few details of their appearance and demeanor, so that in a paragraph you not only know what the person looks like, but you know their backstory, their motivation, their family life, their aspirations and disappointments in life. You feel like you know the person, like you’re pretty sure you’ve met the person in real life.

It’s not just the descriptions of people, it’s all the descriptions. Chabon manages to find the perfect words every time so that it’s not just a description, it’s a visceral feeling. It’s familiar even if there’s no reason it should be. And somehow this is done without feeling like the prose is bloated. The only complaint I have is that he does have a tendency to use an unusual word when a more common one would do fine. It’s a fine line to walk: sometimes the less common word has shades of meaning that are missing from the everyday one. But sometimes it just sounds pretentious. And I’ll admit, there were a couple of times, for some reason both involving violent events, that the word choices and figurative language was so unusual I didn’t actually understand what happened except by context clues. But for the most part, I think the writing falls on the correct side of the fine line.

So what’s the book about? It is nominally about two Jewish cousins, one from New York, one a WWII refugee from Czechoslovakia, who team up to create a superhero comic. I was never much of a fan of comics, but I am enough of a SFF fan that I have absorbed some comics knowledge through osmosis. One of the coolest things about Kavalier and Clay was seeing Chabon use the strength of his prose to convey the power of the story being told by the comics in such a way that an adult reader gets the same feelings as a kid reading the comic.

But comics are just the surface veneer. The main theme of the story is “Escape” and whether it’s a good thing or not, ranging from the escapism of comic books, to escaping the War, to escaping the city to settle for living the American dream in the suburbs, to escaping from that sterile and boring suburban life to be who you really are, etc. I’m not doing it justice of course: it is very well done, perfectly walking the line between ham-fisted and too subtle.

I also found it interesting to see many familiar threads appear in Kavalier and Clay that I recognized from Chabon’s collection of personal essays “Manhood for Amateurs.” Comic books and magic tricks, of course. But also a lot of melancholy and wistful reflections on growing up and nostalgia for childhood, fraternal (or in this case, cousinly) bonds, and the relationship between father and son.

It’s not a perfect book. I found the first half to be much more engaging than the second, as if once he was done introducing new characters, the writing lost some of its initial spark. That said, it was still excellent. The prose in Kavalier and Clay makes you feel things in a way that very few other authors are capable of, and it certainly cements Chabon’s place among my favorite authors.