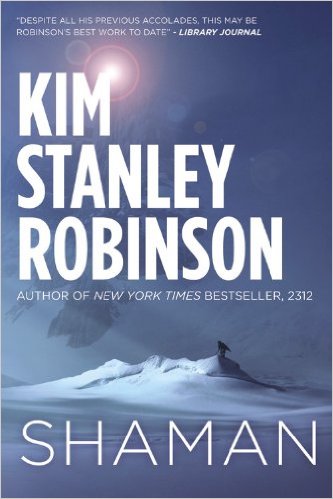 If you’re like most people (or at least, most sci-fi fans), you know of author Kim Stanley Robinson for his epic Mars trilogy about colonizing the red planet. So, it might surprise you to hear that among his many other books is Shaman, a story about early humans in Europe 32,000 years ago at the end of the Ice Age. It is admittedly a different sort of story, lacking the epic scope and huge cast of characters and political maneuverings. But it does have this in common: it’s clear Robinson did a ton of research into the latest science before writing, and then filled in the gaps with plausible speculation to tell a compelling story. And it deals with some similar themes, such as: what would a society look like where you’re starting almost from scratch?

Shaman focuses on a young man named Loon who is being trained to become a shaman by his mentor and adopted father Thorn. There is eventually a quest-type plot, but much of the book is just a leisurely exploration of what life might have been like back then. It’s not especially fast paced, but it is fascinating. This is a time when humans are not the only sentient apes on the planet: neanderthals still exist at the fringes of human territory, sometimes as friends, sometimes as foes. It’s a world where humans are not yet at the top of the food chain, and wolves are not quite domesticated into loyal dogs yet. Heck, humans barely think of themselves as different from animals: Loon doesn’t call his kin group a “tribe”, he calls them a “pack”. And at one point, he refers to his fingernails as “claws”.

But the great thing about the book is that despite the primitive setting, and the “cave man” characters, they are humans just like you or me (except way tougher…I don’t know about you but I couldn’t go out into a winter storm, naked, with no tools of any kind, and come back alive days later with food in my belly and wearing clothes). Yes, they struggle to hunt and gather enough food to survive the winter, something you and I (hopefully) don’t have to worry about. But much of the conflict in the story comes from very familiar difficulties: Does she like me? Will my friend be jealous if I kiss her? What if I don’t want to do the job I am expected to when I grow up? Is the boss making good decisions? Can this stranger be trusted? And the characters are not dumb. One of my favorite characters, the old crone Heather who is sort of Loon’s adoptive mother, represents the potential for humans to figure out the world they live in. She has basically figured out the fundamentals of the scientific method and she uses it to test different herbs for their medicinal properties. There’s a charming scene where she is helping Loon to design a better pair of snowshoes where she explains to him the idea of making and testing multiple different prototypes to find which one works best. But there’s also a poignancy to the book’s exploration of these early hints of technological advancement. At one point this is brought to the fore when a character dies, and in reflecting on their death, Loon laments all the knowledge that person had which is now lost forever. As a modern reader, we know that writing would not be invented for another 29,000 years or so, and almost everything in between, every Heather who has started to figure things out, is simply…lost.

The other interesting thing that the extremely ancient setting allows for is a sort of stripped-down look at human culture, with all of the baggage of 32,000 years removed. I read some reviews of this book that said that it talks about sex too much, but I think their actual complaint was that it is talked about so frankly and openly. Sorry, but humans just think about sex a lot. Trying to hide that under layers and layers of taboos and cultural norms (many of which are more recent than most people realize) doesn’t change the fact. Heck, some of the oldest examples of human artwork are “venus figurines” depicting voluptuous women. It especially makes sense for Loon, a teen-aged boy in a society that doesn’t see sex as shameful at all, to think about it quite a lot.

There are also some great scenes about cave painting, where the author tries to imagine what was going through the artist’s mind while painting the various animal figures that populate the walls of ancient caves. In particular, these scenes do a great job of demonstrating that although the paintings look simple, a lot of thought likely went into them: using the roughness of the cave wall to make the animals appear to move in flickering torch light, adjusting the shading to draw the eye to certain animals. Drawing partial forms or extra limbs to depict motion.

Another major theme of the book is our species’ knack for survival against all odds. Without giving too much away, I will say that a large chunk of the book’s climax deals with a protracted chase, with the protagonists trying to escape from enemies. The chase goes on and on, and the heroes have to keep going despite lacking food or shelter, and despite injuries that would send a frail modern human crying to the emergency room and convalescing for weeks or longer. Even after they escape from enemies, they have to withstand nature as it does its best to kill them. It’s actually exhausting to read, but it does a great job of illustrating how difficult survival was back then. It’s amazing to think that humans are tough enough to withstand what is described, but the truth is we are.

Anyway, overall I really enjoyed Shaman. It’s a little weak on plot, but it is about such a fascinating subject that I didn’t really mind. It does a great job of transporting the reader back to the dawn of modern humanity, in all its brutal and beautiful wilderness, and in the process examines what makes us human.