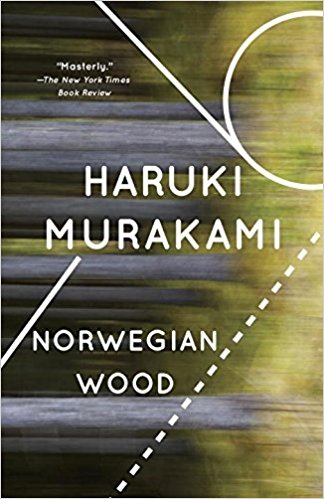 I picked this book up because over on the book suggestion subreddits, Haruki Murakami’s books are constantly being recommended so I figured I’d give one a try. People are constantly praising Murakami for his beautiful prose and poignant writing, two things that I tend to enjoy so I had high hopes. Unfortunately, as you’ll see, I was pretty disappointed.

At times I felt like I must be reading a different book than everyone else: The prose was fine but really nothing special. I’ve read authors who deploy metaphors and similes that light up my mind and make me pause in admiration. Instead, most of Murakami’s writing seemed to fall into the category of “invisible” prose for me, where it flows nicely but nothing really jumps out. The overall melancholy tone was good, and there were occasional moments where the prose got a little more poetic, but even then I wasn’t particularly struck by it. I also found that a lot of the dialog didn’t quite scan for me: there were a lot of what seemed like non sequiturs, which I suspect is at least partly due to something lost in the translation from Japanese to English.

I was underwhelmed by the story and characters too. The main character is just about the most boring person I can imagine, with no real goals or motivation in life, and his primary love interest is a girl who is somehow even more boring than he is. The supporting characters are at least more interesting, but one of them (the second love interest) is an embodiment of the manic pixie dream girl trope (seriously, the description at that link could have been written specifically for her, right down to the hair dye). For some reason, despite being an incredibly boring and unremarkable guy, all the female characters in the book are in love with him and think that his every banal statement is amazing. Even the most interesting character in the book, an older woman who is at the same mental institution as the main love interest, and is a lesbian (and statutory rapist of an underaged girl – which is its own can of worms), ends up sleeping with the main character at the end of the book for no apparent reason. As for the plot, it was almost nonexistent, which is unfortunately pretty typical for a “literary” novel.

I guess I can see how a book about a young guy who mopes around aimlessly and yet for some reason has attractive women (of all ages and sexual orientations!) falling all over themselves to be with him might appeal to some readers, but I really don’t see why Murakami is such a literary darling known for gorgeous prose. Suffice it to say, I think this book just didn’t work for me. Maybe there is some aspect of it that went over my head that I’m not appreciating, but whatever the reason, it just didn’t connect.