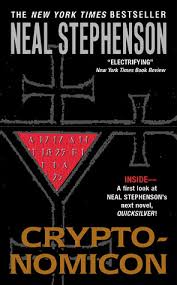 A while back I discovered that I had accidentally accumulated a handful of Audible credits, and so of course to get the most bang for my buck I used them on audiobooks books that were either not available from the library, had a long wait list, or were as long as possible. Cryptonomicon by Neal Stephenson weighs in at a respectable 42 hours, and had been on my to-read list for quite a while, so I bought it and finally started it when I had a long road trip for work back in January.

The book is a huge epic, with a good-sized cast of main characters and two separate but related story lines. Half of the book is set during World War 2 and the main characters are Lawrence Waterhouse, a brilliant math prodigy code-breaker who works with Alan Turing, Bobby Shaftoe, a resourceful marine who ends up in all sorts of interesting situations as the allied powers try to hide the fact that they have broken axis codes, and Goto Dengo, a Japanese mining engineer who ends up involved in a plot to bury tons of gold the axis powers have looted from conquered countries.

The other half of the book takes place in the 90s. The main character, Randy Waterhouse, is the grandson of Lawrence and is a computer hacker who is part of an internet startup trying to establish cryptographically secure internet communications including an anonymous digital currency. He ends up working with the various descendants of the other WWII characters in a plot to recover the buried gold.

In typical Neil Stephenson style, Cryptonomicon is prone to long-winded asides about a wide variety of technical topics, particularly computers and cryptography, but also other stuff, such as completely unnecessary parametrization of things in daily life into systems of equations. I guess this is supposed to dazzle readers with how smart the characters (and the author) are, but I often found it tedious. I’m not sure if it would have been better or worse if I was not already familiar with a lot of the topics covered. Some of these asides are interesting, or at least charming, and many that seem irrelevant at the time end up being relevant later on.  Some of these asides have also aged quite poorly. The book was written in the late 90s, and so it has a number of breathless explanations of computer-related things that the reader is clearly supposed to be amazed and impressed by, which nowadays are just normal boring parts of life.

There are also a few that have aged poorly for other reasons. One in particular stands out: Randy is at a dinner party with his (soon to be ex) girlfriend’s academic colleagues. The girlfriend is a caricature of the “bitchy feminist” and her colleagues are (shudder) social scientists (who are, the text makes clear, lesser forms of life compared to hard science, math, and computer geeks). Randy gets in an argument with a dude who has become famous for raising difficult questions about the rise of the internet, and in particular how inequality in society means that poor people will not have the same chance to benefit from the internet as rich people. Instead of responding to the actual (very valid and still very relevant point), Randy leaps to the defense of the internet by criticizing the “information superhighway” analogy and  flaunting his impressive credentials as… a UNIX sysadmin I guess? I guess we’re supposed to be impressed by that? The “best” part of the chapter is when the academic points out that Randy, a white male from a long line of well-to-do math whizzes, has benefited from privileges that others may not have shared, and Randy (a) claims the he doesn’t have privilege, and (b) it’s clear that the reader is supposed to side with him.

That one chapter basically turned me off from Randy and his whole story line. These days it’s just not that fun to read a story glorifying tech-bros who are inventing bitcoin (even if that story improbably leads to all sorts of adventures in the jungles of the Phillipines). I mean, all due credit to Stephenson for linking cryptography and the potential for digital currency back in the late 90s: that’s some good sci-fi future prediction, even if Cryptonomicon is naively obsessed with the need for a gold standard to back such a currency. But too often I found that the book, especially the modern story line, seemed to glorify white male nerds in a way that doesn’t sit quite right nowadays, when stereotypical white male nerds, especially those obsessed with “individual liberty” and cryptocurrency have become one of the most toxic segments of the population on and off the internet. (I should also mention that Randy’s interactions with and thoughts about women do not help the situation. There’s a “Men are from Mars, women are from Venus” vibe that doesn’t age well. I found his romance with Amy Shaftoe extremely far-fetched: at some point in the book she goes from strong, independent woman to emotional and needy potential girlfriend, and it’s entirely unclear why she would be interested in him.)

On the other hand, the WWII storyline is really good. Still prone to long, often gratuitous, tangents, but I enjoyed the characters and the story much more. Lots of interesting people jetting around the globe, getting into and out of trouble. And it also focused on a part of the war that I did not know much about, the southeast Pacific, so I learned at least a little real history mixed in with the fictional parts.

When I finished this book, I wavered on how to rate it on Goodreads. I love giant doorstopper epics, and it has some great moments and memorable characters. It tells a heck of a yarn, and the way the past and “present” story lines are interrelated is pretty well done. But it also has the issues I mentioned above. In the end I went with three stars. I think there is a four or even five-star book buried in there, but Cryptonomicon is badly in need of an editor willing to mercilessly wield her red pen to trim down the considerable bloat and improve the modern storyline. Lacking that, it’s uneven and too-long. I’m glad I read it, but I’m always disappointed when a book isn’t as good as it could have been.