I’ve been trying to figure out what I want to say about this book since I finished it yesterday afternoon. It defies a simple summary but I will try. I think a disjointed list of adjectives is a good place to start. House of Leaves is, at times:

For the uninitiated, House of Leaves is a novel that experiments wildly with the form, pushing the boundaries of what can even be considered a novel. The book consists of a core document, which is a dry academic literary analysis of a documentary called the Navidson Record, written by an old man named Zampano, and discovered and assembled into a single document after his death by a young man named Johnny Truant. The Navidson Record is a documentary (which may or may not actually exist) about a Pulitzer prize-winning photojournalist and his family, who move into an old house and discover that a closet door in the hallway opens up into an infinite, constantly changing, maddening labyrinth. In the footnotes of the main document, Johnny Truant writes his own story in long, rambling, increasingly insane passages, as he becomes more and more obsessed with House of Leaves and the impossible house described in the Navidson Record. In secondary footnotes to Johnny’s footnotes, his backstory is told obliquely in a series of letters written by his mother while she was in a mental institution, gradually spiraling into insanity. 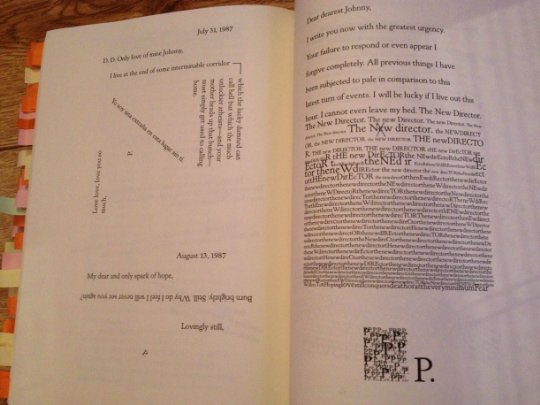 As the book progresses, the text gradually disintegrates from a normally formatted page of text into bizarre chunks and strings and pieces of text that mimic the labyrinth of the house. Reading it, you often find yourself having to hold the book upside down or sideways or diagonally. Footnotes will send you on a wild goose chase through the multiple appendices. There’s a whole section of poetry in the back (much of it nonsensical, some of it quite good), as well as photographs (themselves depicting text scrawled onto notecards or scraps of burned paper). At one point, the pages of text have a sort of tunnel through them, revealing text on the following page. Entire sections are left blank or are struck out. The word House is always shown in blue. 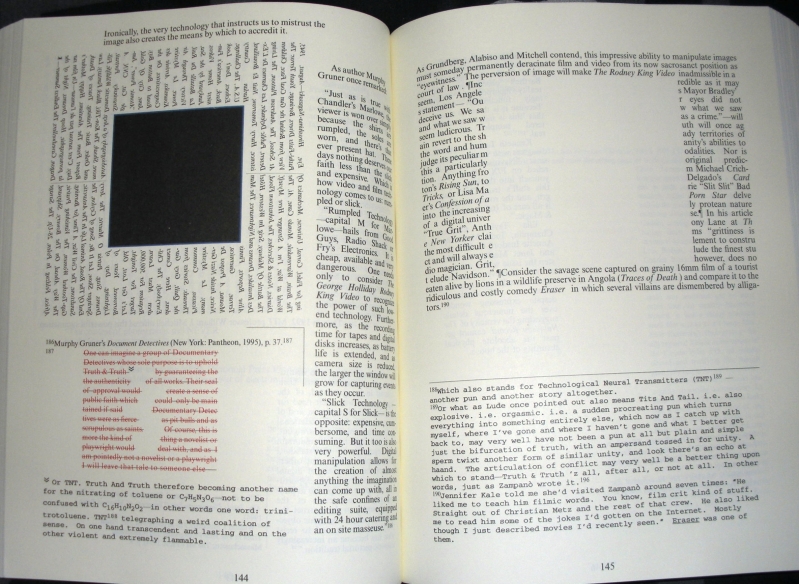 This was a frustrating book for me. It’s clear the author can write well: there are moments of beautiful writing hidden in here, and there is some great symbolism running through the book, of the kind that engages the mind and makes me think that there is surely more beneath the surface that I wasn’t quite perceiving. But at the same time, as I said above, it is sometimes almost unreadable. The central document is written in an obnoxiously academic and exceedingly boring style, made all the more boring because it is a fictional parody of actual literary criticism, and it is a detailed analysis and critique of another fictional document (the Navidson Record), which may or may not even exist in the fictional world in which the literary criticism is taking place! I found my self falling asleep regularly while reading this.

It’s also an annoying book to read, because at times you need multiple bookmarks to keep track of where you are. Often footnotes will send you to some obscure appendix only to find that there is nothing there. Other times you’ll think you are near the end of a section, only to end up following a footnote to an entire separate section hidden in the appendix. Toward the beginning the experimental form of the book was fun and cute, but the novelty quickly wore off for me and I found myself rolling my eyes a lot. And speaking of rolling my eyes: this book is very pretentious. It wants very much to make sure you know exactly how clever it is being. 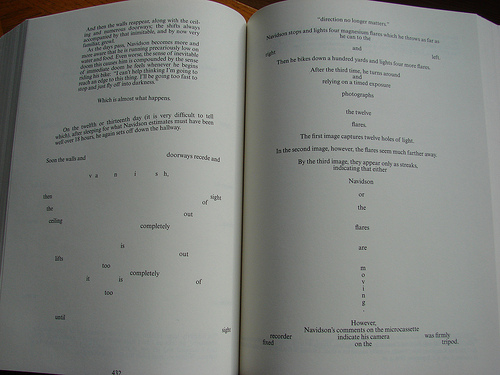 The thing about the experimental format of the book is that it disrupts the actual story lines in a way that (a) makes them seem bigger and more complex than they actually are, and (b) makes them harder to stay invested in. I was not particularly gripped by either Navidson or Johnny’s story. Johnny mostly talked about doing drugs and sleeping with a variety of beautiful women, and Navidson’s story can basically be summed up as “Men explore a giant labyrinth full of symbolism”.

I have seen people online say that this was one of the scariest books they had ever read. I’ll say flat out that I didn’t really find this book to be scary. There were a few rare moments that were slightly creepy, but even those were more of the “heh, cool” kind of creepy than the “yikes, I’m going to have trouble sleeping tonight” sort.

On the flip side though, I have tremendous respect for the sheer amount of work that went into making such a convoluted and complicated book work. The attention to detail is amazing. There are a few sections with scientific detail about radioisotope dating and the age of the solar system and advanced analysis techniques that totally pass my sniff test. There are extensive citations to other documents, many of which are also fictional, but others which are not. And the editors, typesetters, and publisher deserve a medal for putting this book together.

And as I said, there are parts of the writing that are very good, and the layers of symbolism and meaning are masterfully woven through the disjointed and bizarre pieces of the book. Yeah, it’s obnoxious and pretentious at times, but it also, somehow, works.

Bottom line, although there are a lot of things about this book that were “not for me”, I am glad I read it, and I can recognize that it takes a certain sort of insane brilliance to write something like this. If you’re looking for something scary, you can do better than this, but it is certainly the most unique reading experience I can recall having, and I would recommend it to others just for that.