A martian’s review of The Martian (book) 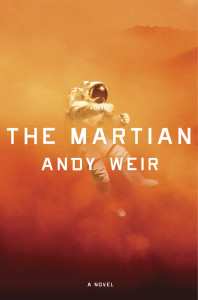 As someone whose day job can be summarized as “zapping rocks on Mars with a laser” and who is interested in writing speculative fiction, I know you will be shocked to learn that I have some opinions about the novel The Martian by Andy Weir. I will now share these opinions with you!

The premise behind this book is as simple as it is compelling: Astronaut Mark Watney is stranded on Mars after his crewmates believe that he has died in a violent sandstorm and are forced to abort the mission. Watney has to survive on the surface of Mars with limited supplies and equipment, until a rescue mission can come get him. It’s basically like Castaway, but on a planet that is extremely hostile to life instead of a tropical island.

The Castaway analogy works, but the best description of The Martian I have heard ( Edit: someone pointed out that it was this xkcd. Because of course it was xkcd). is that it’s like that scene from Apollo 13 where they have to get the square CO2 filters to work in a round hole, but it goes on for an entire book. If you loved that scene, you will love The Martian. If you don’t remember that scene, then you may not be as excited to read page after page of how Watney figures out how to grow potatoes in Mars soil, or how he manages to create hydrogen by catalytically breaking down rocket fuel.

I know you are now bracing yourself for a few thousand words of pedantic nit-picking from the Mars scientist who wants to correct every little scientific detail in the book, but surprise! I’m not going to do that for two reasons: One, it’s boring. Two, the book was actually pretty good in terms of science. I have two main technical things that I’ll complain about but then I’ll move on to some other non-sciencey things to nit-pick about instead!

The main technical problem in the book is that it vastly overestimates the violence of a martian dust storm. In fact, it repeatedly calls them sand storms. The problem is, Mars has a very thin atmosphere, so while you can get very fast winds, they don’t have much “oomph” behind them. They certainly are not going to dismember a communications antenna and send it hurtling like a javelin into a hapless astronaut. And you’re not going to end up with the drifts of sand that are described when Watney wakes up from his almost-fatal impaling. Sand does move on Mars, but not in huge amounts like that.

I actually heard an interview with Any Weir yesterday, and he brings this up. He says that he actually knew that this was inaccurate, but that since the book is basically a Man vs Nature story, he wanted Nature to land the first blow. And he also pointed out that scientists like me are now coming out of the woodwork explaining to people that the winds on Mars aren’t actually that strong, and so the net result is probably that the public knows much more about the strength of wind on Mars that they would have if he had gotten the science right. So ok, I can live with that.

My other main problem is that Watney has to drive an absurdly long distance across the surface of Mars. It’s just not realistic to have someone drive halfway around the planet. I get that he’s in a giant rover, and so can traverse across obstacles much larger than the robotic rovers could. But he certainly wouldn’t be doing that at 25 kph. And just as importantly, for most of the time he is unable to communicate with NASA or the orbiting satellites, so he doesn’t have high-resolution images to help him plan his route. I can tell you that even with 25 cm per pixel resolution to help us plan where the current robotic rovers drive, we are still surprised by obstacles sometimes.

But really, other than the inciting event and one of the major plot points, I thought the science was pretty good. That sounds snarky, but it’s true: those are both places where the Story takes precedence over being realistic, and that’s ok. For the rest of the book, all the technical details were about right. There were countless places where I put the book down and yelled at Watney “No! Don’t do it that way! This way would be much better!” or other comments along those lines. And then in the next line, he would realize exactly what I was thinking. These were not cases where the technical details were wrong, they were places where Watney was being deliberately slow so that typical readers can follow along with him as he figures things out.

In reality, upon being stranded, an astronaut would probably sit down and figure out in a few hours and a few pages of calculations what it takes Watney weeks, and lots of trial and error, to sort out. But that would be awfully boring to read, and amazingly, Watney’s struggles are not! To me that is the great accomplishment of this book: it manages to make long, detailed descriptions of technical problem solving not only palatable, but actually engrossing. This book is a page turner!

The book is so readable because of Mark Watney’s voice. His personality is finely-honed to be extremely charismatic, likeable, funny, and relatable. The Martian is a spectacular example of the power of voice to make a piece of fiction readable and exciting. If Watney didn’t have a compelling voice, nobody would be able to tolerate the long passages of technical details. At times, I found the degree to which Weir tries to make Watney a relatable everyman a bit annoying. In particular, whenever Watney is making cracks about how nerdy those guys at NASA are. DUDE. You are a mechanical engineer slash botanist astronaut on Mars. I’m pret-ty sure that qualifies you as one of those nerds at NASA!

This spilled over into some of the scenes on Earth as well. In order to make the scenes on Earth understandable to a normal audience, everything had to be explained in great detail. So you end up with lots of scenes where one character has to come across as clueless so that the other character can explain things to them (and to the reader). This is not how normal conversations between people at mission control would go. Realistic conversations would be nearly incomprehensible to someone who is not an expert, thanks to all the shorthand. People wouldn’t be explaining things in great detail, instead other people would be cutting them off mid-thought, already seeing where they are going and jumping to the next logical conclusion. Believe me, when I first got to participate in rover planning meetings as a baby graduate student, everything was just a confusing jumble of acronyms and jargon. Heck, sometimes it still is!

So, I totally understand why all the Earth scenes had to be the way they are so that readers can follow them, but I still found it a bit annoying. (In fiction there’s a term for conversations between two characters where one of them explains something to the other, when both of them already know it. It’s called the “As you know…” trope.)

Anyway, on to my biggest complaint about this book. You will notice that up above I said that Watney’s voice was extremely compelling. I was careful to say “voice” and not “character” because in my opinion Watney is an extremely poorly-developed character. I know, I know, this is going to be an unpopular opinion. But hear me out. Over the course of an entire novel, what do we learn about Watney? He’s from Chicago, he likes to crack jokes, he hates disco. We get a few mentions of his parents. We learn what his areas of expertise are (the better to buy into his ability to come up with MacGyver style hacks). But even though it is abundantly obvious that Watney has TONS of free time as he sits around on Mars, we never see any depth to his character. We’re supposed to believe that he just sits around and watches bad 70s TV in all his copious free time and doesn’t do things like, say, reminisce about all the people and things he misses on Earth. He apparently has no friends, no significant others, no pets. He barely even thinks about his parents. Where are the emotional scenes where he is missing the ability to step outside and feel the breeze on his skin, the warm sun on his face? Where are the dark moments where he almost gives up hope? Why doesn’t he seem to be fazed by more than a year of absolute isolation? Nope, hardly any of that. He just watches TV and makes bad jokes during all his free time.

I’ll tell you my theory: the author was afraid that getting too negative would bum people out and make them stop reading. So instead we get a protagonist who is so freakishly optimistic and cheery that it removes the emotional core of the story. There are lots of cliche sayings about not being able to appreciate the good without the bad and the like, but I think they really do apply here. As it is right now, The Martian is a pretty good book. If Weir had been willing to dig a little deeper and allow his character to explore some of the actual emotions that a person would go through during years of solitary confinement on a hostile alien planet, it would be a great book.

But all my nitpicks and complaints aside, I should make it clear that I thoroughly enjoyed this book, and I highly recommend it. Is it great literature? No. But it is awesome science fiction, with a heaping dose of accurate scientific fact. It’s an exciting page-turner, and it is likely going to do more to inspire people to be interested in space exploration and teach people about Mars than NASA could ever dream to do with all of its public outreach and press releases. I have no doubt that there are kids in high school right now who will be inspired by this book (and/or the movie) to go on to become engineers and scientists. And for that, I’m willing to overlook some minor flaws and get swept up in a good story with everyone else.