To be or not to be…cynical

I have decided that I am too cynical about some things. I came to this realization over the last couple weeks because two things happened. First, the trailer for the new Star Wars movie came out, and second, NASA had a workshop to help identify possible landing sites for human missions to Mars. The common thread here, other than awesome things happening in space, is that these are both things where I’m afraid to get my hopes up.

I would love it if the next Star Wars movie is as good as it looks like it will be based on the trailer. I have a deep love for the original Star Wars movies, and I even liked some parts of the prequels, but overall the prequels were disappointing. A classic case of a successful person being given too much leeway, with nobody daring to take him aside and say “You might want to reconsider Jar-Jar Binks” or “Is that slapstick scene with C3PO and R2D2 on the conveyor belt really necessary?” or “Don’t you think it works better if Han shoots first?” And so my initial gut reaction to the possibility of a new Star Wars movie is cynicism. Sure, the trailer looks good but it’ll probably have awful writing and acting, or some silly juvenile slapstick sequence because moviemakers don’t think kids have the attention span or intelligence to understand anything else. But then I watched the trailer again. And again. And John Williams’ powerful Star Wars fanfare slowly chipped through my protective layer of cynicism. I want this movie to be good: why not embrace it and enjoy the hopeful feeling that it will live up to the original trilogy? These thoughts were then summed up perfectly by this comic: 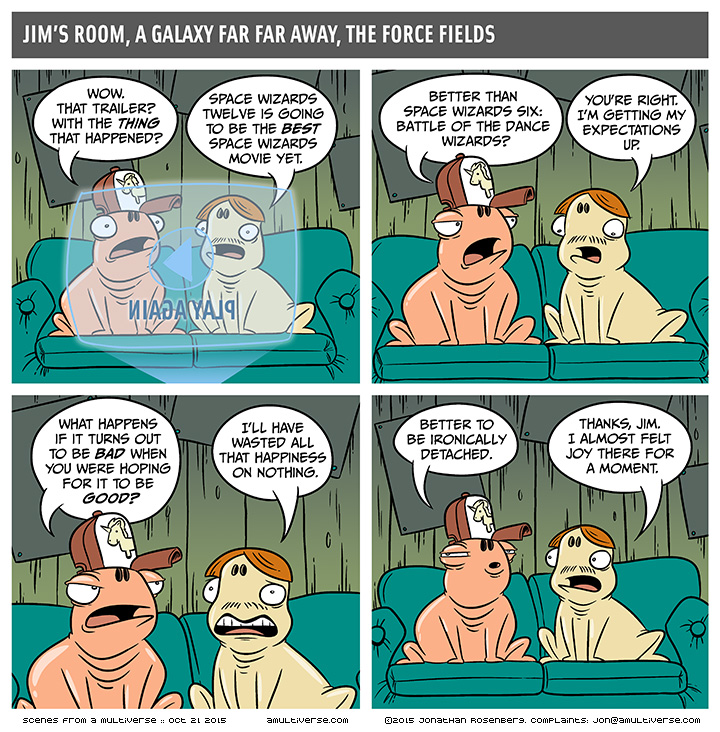 Likewise with the NASA human landing site workshop. For years I have been extremely cynical about NASA’s human spaceflight program. It is hamstrung by congresspeople who just see it as a jobs program, and so insist on using old-fashioned parts built by contractors in their districts, rather than allowing the brilliant engineers at NASA make their own decisions about how to build their rockets. It is underfunded and plagued by bureaucracy and modern NASA’s complete aversion to anything risky. The last program to build a new NASA rocket got so bogged down and over budget that an independent panel of experts recommended that it be scrapped. NASA doesn’t even have a rocket capable of getting to low-Earth-orbit, let alone Mars. Isn’t this landing site workshop a bit premature?

But the thing is, I got into space exploration because I was inspired by the idea of people exploring the solar system. I would love more than anything to see NASA doing something awesome like sending people to Mars. I am so cynical about NASA’s human spaceflight program because I want so much for it to succeed and I don’t want to be disappointed. But, like the realization with Star Wars, it finally occurred to me this week that my cynicism isn’t doing myself, or NASA, any favors. Far better to be brave enough to let my excitement show through, despite my doubts. Because while I’m sitting around being cynical to protect myself from disappointment, my friends are at NASA, choosing where people will land on Mars. That is so cool!

So, bottom line: I am going to try to be less cynical. I recognize that it’s a defense mechanism to protect myself from disappointment, and that I should embrace the things that I think are awesome. Instead of preemptively being unhappy, I might as well enjoy the anticipation and hope that these things I love will live up to their potential.