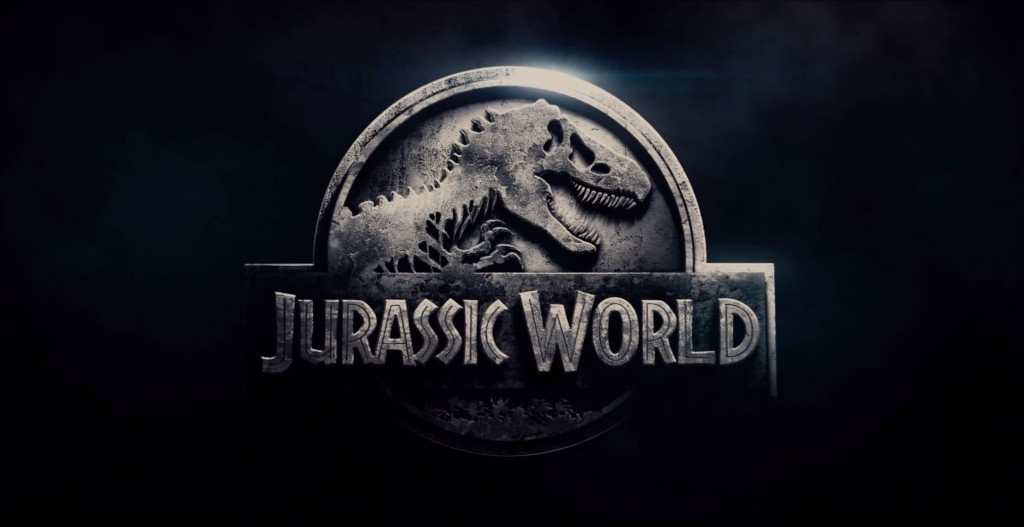 Jurassic World is the worst movie I have seen in a long time. Let me explain why.

I love the original Jurassic Park. It came out when I was in elementary school and obsessed with dinosaurs, and I have watched it many times since then. I admittedly have a lot of warm fuzzy nostalgia feelings for the original movie. But still, I think the original is also a genuinely good movie. It has its flaws, to be sure, but it is overall pretty good.

Jurassic World is basically the opposite of that, and should become a textbook example of how not to reboot a franchise. Except that it made mountains of cash, so who cares if it was any good?

The most impressive failure of Jurassic World is that it manages to look more fake than the original movie, despite the fact that it has the benefit of 20 years of advances in CGI. In fact, that’s exactly its problem. When the original Jurassic Park came out, CGI was a new thing, and the filmmakers knew that it needed to be used very carefully or else it would look super-fake. Jurassic World has no such qualms. Every single shot is CGI, and although computer graphics these days are incredible, they still can’t match the realism that you get from an actual physical object that exists. The animatronics in the original movie were amazing. No, you can’t do as much with them as you can with a completely animated CGI creation, but they look real. The way the light glints off of a T-Rex standing in the rain at night can’t yet be captured by CGI. It can get close, but it is not to the point yet where it really looks quite right. Rely on it too much and your movie starts to look like a cartoon. Despite the amazing graphics, the animals in Jurassic World look totally fake, because the filmmakers thought they could get away with showing everything. The graphics just aren’t there yet to make something like an absurdly large mosasaur leaping out of the water to devour a shark look real. 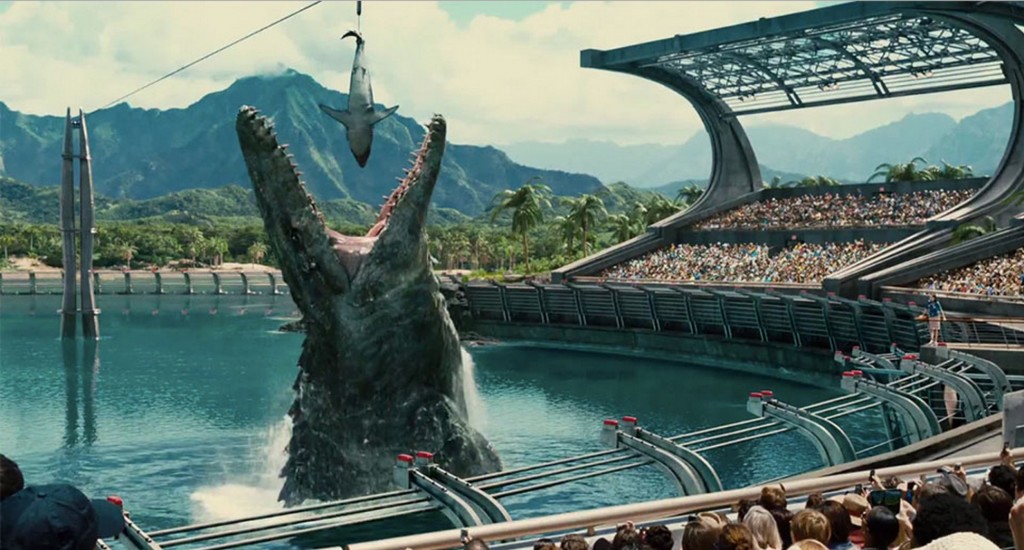 There’s no reason that Jurassic World had to look fake. They could have artfully mixed physical models of dinosaurs and CGI dinosaurs the same way that the original did and had a great, realistic-looking movie. They could have held back a bit, and thought a little bit about cinematography, and realized that hey, maybe less is still more when it comes to CGI. But they didn’t and here’s the reason: they didn’t care. And that’s my next big qualm. The original movie was all about making the dinosaurs real. It was grounded in relatively modern science, and it did a good job of treating the dinosaurs as animals and not just fictional monsters. They weren’t evil, they were just… dinosaurs. There was a true sense of awe at that fact that permeated the movie.

Jurassic World lacks that entirely. They even go so far as to acknowledge it in a lame attempt to explain their ridiculous godzilla monster of a fake dinosaur, saying that the public just wants bigger and scarier dinosaurs and what are they to do? This is basically the creators of the movie admitting directly to the audience that they think the viewers are stupid and that they can get away with the lazy route of making up a big fake dinosaur instead of, I don’t know, writing a movie with an actual plot about actual characters.

And let’s talk about the characters. What character traits do we learn about them? The teen-aged boy likes girls. The younger boy is nerdy in a sort of vague way. The pretty lady is their aunt, and doesn’t know what to do with kids, and is mostly useless. Chris Pratt is ex-navy and trains the raptors like dogs. The guy in charge of the park is learning to fly a helicopter. The bad guy wants to use dinosaurs as weapons in war, because he is an idiot. That is literally all I can tell you about the characters in Jurassic World. I don’t know any of their names. Among them, Chris Pratt is the only character who is competent at anything.

Now, Jurassic Park is not the strongest movie when it comes to characterization and plot, but the characters were at least competent and had a purpose that made some sense. Why were Drs. Grant and Satler visiting the island? Because Hammond promised them funding for their research. There’s a whole subplot about how Grant doesn’t want to have kids but then when the park shuts down he becomes a father figure to Lex and Tim. Lex and Tim are computer and dinosaur geeks, respectively, but these skills actually are useful to drive the plot or character development. Tim is able to identify dinosaurs and reassure his sister that some are safe, and Lex’s computer hacking skills save the day to electronically lock the doors. (I’ll also note that Tim’s dino geekery is rooted in the scientific literature of the time. He even cites the paleontologist Bakker as having a theory that dinosaurs died of disease rather than a big impact.) Ian Malcom is his own special snowflake of a character, stealing every scene he’s in, and serving as a cautionary voice, but also as comic relief, and as a source of tension with Grant when he starts hitting on Satler.  Hammond means well, and gives a whole speech about how he wanted to create something real, not just the flea circuses of his childhood. Dennis Nedry is the closest thing to a villain, but his motives at least make some sense, and we get a lot of insight into his character from his weird hacker tricks (“Ah ah ah, you didn’t say the magic word!”) and messy workspace. There’s just so much more there in terms of plot and character development in the original movie than there is in Jurassic World.

There’s also the whole problem of scientific accuracy. Jurassic Park was pretty cutting edge. At the time, the idea that dinosaurs were warm blooded and related to birds was relatively new, and the movie did its best to remain in line with current theories while still telling a good story. Since then, we’ve learned that most dinosaurs had feathers. And not just a few, they were likely covered in them. And yet all the animals in Jurassic World are bald. This isn’t a really big deal, but it’s just annoying to those of us who loved the original movie in part because it tried to be relatively accurate. (And don’t try to convince me that an animal with feathers can’t still look scary and awesome.) 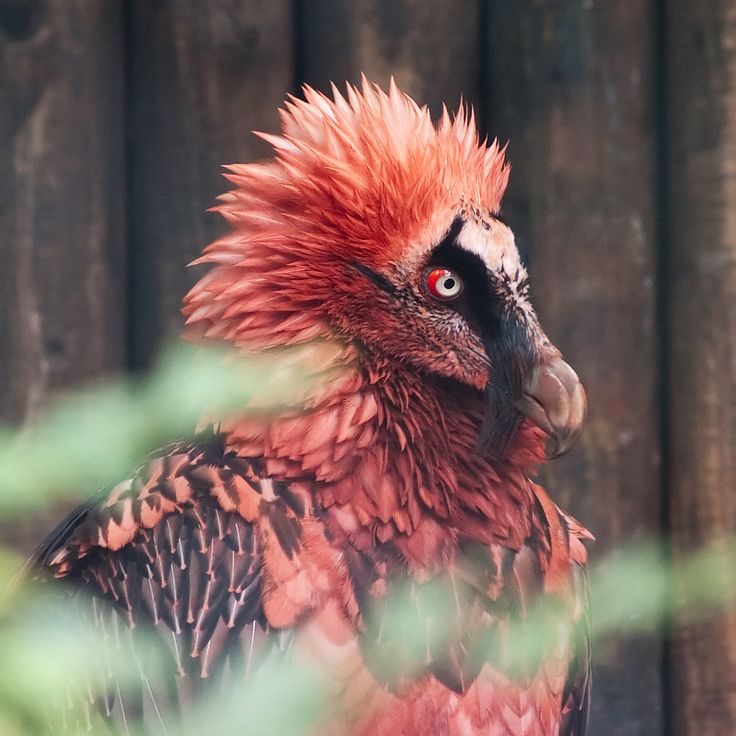 I roll my eyes in the original movie when they say the used frog DNA to fill in the genome, but ok, they needed an excuse the make the dinosaurs breed in the wild. But in Jurassic World when they say that they spliced in cuttlefish DNA? And it gave the dinosaur the ability to camouflage like a cuttlefish, and also somehow violate the laws of physics and hide its infrared signature? Ugh.

The last movie that I strongly disliked was Mad Max, and my wife posed an interesting question: Which did I dislike more and why?

I disliked Jurassic World more. Mad Max, even though I was disappointed by it, I have come to appreciate that it essentially succeeds at doing what it intended. It gives the viewer a bunch of weird and spectacular action sequences. Jurassic World on the other hand, fails at what it’s trying to do because it is trying to be like the original movie (it even shamelessly imitates some iconic scenes, such as driving the jeep through the flock of gallimimuses, and luring the T-Rex with a road flare). And yet it completely misses what made the original movie great. Instead of awe and respect, it shows the dinosaurs and pterosaurs and mosasaur as mindless killers. (I sincerely do not understand why the pterosaurs, when released, made a beeline directly toward the crowd of people in the park and started eating them instead of, you know, just…flying around like a bunch of big birds would do.) Instead of intelligent competent characters, we get cartoon villains, a helpless damsel and kids, and a too-perfect badass Chris Pratt. I know people will say that Jurassic World is just trying to be a dumb action flick, but I can’t judge it by that low bar because it is claiming to be a part of the same franchise as the original movie, which showed that you can make an action-packed blockbuster that is also not stupid.

Maybe my judgment is just clouded by nostalgia and scientific geekery. Ok, it definitely is. But I would gladly re-watch the original movie any time for any reason. If I ever have to re-watch Jurassic World, all I can say is I hope there is a drinking game involved.