My Baby Was Not Intelligently Designed 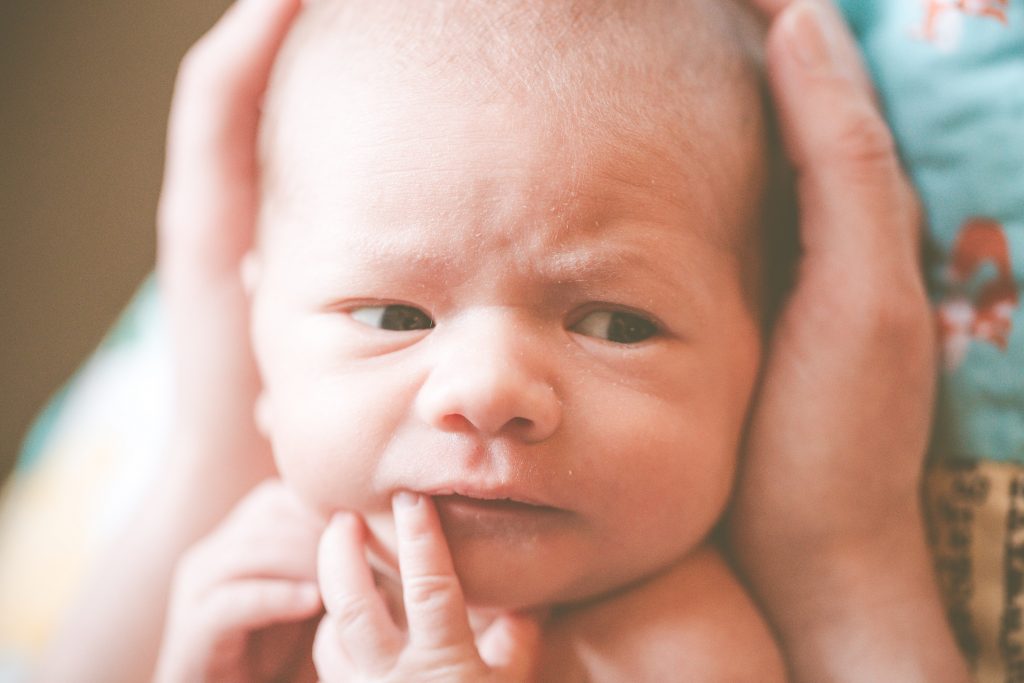 Baby is concerned about all of his design flaws.

The idea of intelligent design is silly, and has been thoroughly debunked by scientists with more patience than me, but now that I’m a dad, I have a new perspective on the idea. Instead of painstakingly giving examples of the independent evolution of the eye or calmly explaining that we share a common ancestor with chimpanzees, we didn’t evolve from them, I have realized that all you need is a human infant to illustrate how far-fetched intelligent design is. Babies have a number of fundamental design flaws that conclusively prove that there was no Designer.

First of all, before we even get to babies themselves, let’s reflect on the fact that human childbirth is a horribly painful and dangerous undertaking for the mother, with death of the mother and/or child in childbirth disturbingly common before modern medicine. This is, needless to say, not a good starting place for those who argue that humans were perfectly engineered by God.

And then you have the babies themselves. The reason that childbirth is so difficult is that humans have large heads containing large brains. Our brains are what make us special. And yet, babies are born with holes in their skulls that don’t close for years, and necks that are too weak to even hold their heads up for months. It’s also quite common for newborn babies to require treatment for jaundice. Why? Because their livers aren’t mature enough to effectively remove the bilirubin in the blood formed by breaking down red blood cells. Too much bilirubin can cause brain damage. I’m just saying, if I were engineering an animal that was so reliant on brainpower, I think I’d try to do a better job of protecting the brain and spinal cord.

Then there is the issue of eating and digestion. As we learned when our boy was born 5 weeks early, babies who are born even slightly early often lack the coordination required to be able to nurse, swallow, and breathe in a good rhythm. You would think that swallowing and not choking would be high priorities, something built in as an instinct, but apparently these things take practice. We also learned while in the NICU waiting for our baby to learn to eat that often when babies begin to eat, their body diverts blood to the digestive system, which causes the oxygen levels in the rest of their body to drop. Call me crazy, but it seems to me that getting oxygen to the brain should be prioritized over digesting food in the belly, since the one can cause damage in seconds, the other takes hours or longer to cause a problem.

There’s also the spitting up issue. After managing to master the complex art of eating without choking or falling asleep or desaturating blood oxygen, you would think that the digestive system would be designed to keep the milk in the stomach.  It is not good at this! Slight pressure on the stomach, too much excitement, a stray air bubble, all can cause the stomach’s contents to erupt like a milky Vesuvius.

Finally, there is the fact that newborn babies are completely helpless. They don’t even figure out that they can control their own arms and legs for months. They can’t see more than a foot or so at first. As mentioned above, their heads are squishy and poorly attached, and it is more than a year before they can walk reliably. Human babies are just born way too soon, leaving the parents and other adult humans to care for what is essentially a still-developing fetus as it struggles to survive in the cold, harsh world outside until it is fully functional. To me, this seems like a fundamental design flaw.

I can easily explain all of these things based on an evolutionary perspective, but there are simply too many bad engineering choices for me to believe that someone intelligently designed human babies.

The Color of Acid

The other day I was playing Starcraft 2 and trying to think of the next topic to tackle here. As I watched a swarm of zerg roaches attack a group of terran marines, I realized that I needed to talk about acid. Two of the new zerg units, the baneling and the roach have acid-based attacks. The baneling is a little suicide bomber that detonates, splashing corrosive acid all over nearby units, while the roach is a nasty armored insect that spews a stream of acid on its foes from a distance.

I like both of these units in the game, but they perpetuate a myth about acid that has infested pop culture for years: it is bright neon green. I’m not sure where this idea originated. Maybe it goes back to World War I, when chlorine gas was used as a chemical weapon. It’s not an acid, but it is a nasty caustic chemical that is a sickly green color. Or maybe the green acid idea can be traced back to the movie Alien, where the alien is revealed to have highly acidic blood that looks greenish yellow.

The famous shot of the alien's acidic blood in Alien.

Whatever the origin of the idea, it’s patently false. Most acids are colorless in both their pure form and in solution. Sulfuric acid? Colorless. Hydrochloric acid? Wikipedia says that it is colorless to light-yellow, but I’ve never seen an example that showed any color. Hydrofluoric acid? Colorless.

I don’t know of any acid that is brightly colored, though I admittedly not a chemist. There are probably some nice, colorful organic acids, and it’s certainly possible for acid to be mixed with other colored stuff in a solution, but in the real world acid does not conveniently advertise its corrosiveness by being bright green.

While we’re on the subject, let’s talk about the plausibility of an insect spraying acid, whatever the color may be. This is actually plausible to me. There are plenty of examples of insects that are armed with chemical-based weapons. One of the most famous is the bombardier beetle, which defends itself by blasting a nasty, boiling hot liquid at its attackers. Bee venom contains formic acid, and many ants inject or spray formic acid or other chemicals when they bite.

If we’re willing to suspend disbelief enough to allow the zerg to exist in the first place, I’m also willing to grant that they might use caustic chemicals to attack, since real-world insects do this too.

Can Life Really Survive in Space?

A zerg swarm, silhouetted against some colorful nebulae as they cross the vacuum of space.

In Starcraft, the biological, hive-minded Zerg can survive and even thrive in the vacuum of space, while the more fragile humans (and presumably the Protoss) require some sort of space suit. So that got me wondering: How plausible is it for living organisms to be able to withstand the vacuum, extreme temperatures and high radiation levels of space?

Fist of all, I’m going to set aside how the Zerg fly around in space. That may be the subject of a future post. I’m more concerned with just the idea of a hydralisk standing on an exposed moon-like surface and not immediately freezing or suffocating or otherwise dying gruesomely. END_OF_DOCUMENT_TOKEN_TO_BE_REPLACED

The Real Science of Starcraft 2

Well folks, it looks like I’m not the only one interested in the Science of Starcraft! The gaming site GamePro has a very interesting article taking a look at several aspects of StarCraft science, including teleportation, zerg in space, a hive mind, and hybrid species. They cover each topic pretty quickly but it’s still worth reading. But be sure to check back here! I’ll dig into those and other topics in a lot more depth.

By now, you have probably seen the absolutely epic Starcraft 2: Ghosts of the Past trailer. If not, take a look at this, and pay particular attention to the depiction of Sarah Kerrigan’s cloaking device at about 11 seconds in:

Cloaking is common in science fiction: Star Trek pioneered it with the Romulans, and other popular franchises like Star Wars and Predator and Halo have used it. And of course in Starcraft and Starcraft 2 both the Terrans and the Protoss have a whole variety of cloaked units. But could it really work? You may be surprised to learn that the answer is yes!

Obviously, this sort of technology would be extremely useful for the military, so they are funding research into technologies that could make it a reality. There are basically two ways that you could achieve “cloaking”. The first way would be to actually divert light around the cloaked object, so that it appears not to be there. END_OF_DOCUMENT_TOKEN_TO_BE_REPLACED

What is Zerg creep, really?

Artwork from StarCraft, showing a creep-infested platform near the planet Char.

“What the hell is that? Looks like the ground there is alive.” – Jim Raynor

Creep: that purple, fibrous, living mat that extends from zerg “buildings”. Its ominous presence always tells you you are entering unsafe territory, unless of course you’re playing as zerg, in which case it says “welcome home”! But what exactly is it?

Well, let’s think about it scientifically. It is produced by zerg buildings and spreads across any available surface. According to the Starcraft Wiki (which I will use as an authoritative source for all the minutiae of StarCraft trivia that I don’t know) Creep has a cellular structure: it’s not just mucus. The Wiki also says that creep can absorb sustenance from the underlying terrain, that it can be spread by “spores” or excreted by several units, and it provides nutrients to zerg buildings. It is averse to high temperatures but can grow in space and over water.

So, does any real-world living thing match this description? Surely not, right? Wrong. END_OF_DOCUMENT_TOKEN_TO_BE_REPLACED