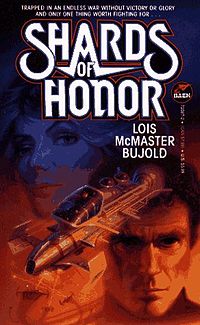 I picked up Shards of Honor by Lois McMaster Bujold  because (a) I had heard great things about her Vorkosigan saga, and this is the first book in the series, and (b) I really enjoyed her fantasy novel The Curse of Chalion.

Shards of Honor starts off with the main character, Cordelia Naismith, leading a scientific scouting party on an unsettled planet. They are ambushed by enemies, her crew is killed, and she finds herself the captive of Aral Vorkosigan, an officer of the Bararryan military. The twist is, he didn’t order the attack, it was a plot from political enemies to get rid of him by making it look like her people killed him.

Cordelia and Aral have to work together to get back to safety, and in the process they almost immediately fall in love.Eventually they make it back to Vorkosigan’s ship, but then Cordelia is “rescued” by her own people and the star-crossed lovers end up separated.

I won’t detail the rest of the plot, but in broad strokes, they find themselves back together when Cordelia is once again captured by the Bararryans, just before war breaks out between their people. Lots of political intrigue ensues.

Shards of Honor is good old fashioned space opera, with fleets of ships and planetary invasions, and political maneuverings that hold the fate of many planets in the balance. It had been a while since I read something like this, and it was very readable.

Unfortunately, the main character is pretty passive. Most of the time things are done to her and she reacts, rather than having her own actions move the plot forward. It’s almost as if the real main character is Aral Vorkosigan, and Cordelia exists primarily as a proxy for the reader: an outsider who is present for the major plot points but doesn’t know much so needs things explained.

Also, I was just not convinced by the romance which is at the heart of the story. We’re supposed to just believe that after having all of her friends killed by Vorkosigan’s people, Cordelia still falls almost immediately for Aral because he is handsome and tough and helps her bury her dead friend.

The plot was also somewhat disjointed and some subplots don’t really resolve in a very satisfying way. Apparently this novel was originally longer and was split into multiple pieces, and I think that left some rough edges.

After finishing the book, I read a bit about the “proper” order in which to read the Vorkosigan saga, and it turns out Shard of Honor is Bujold’s first novel, ever. Given that, the flaws in Shards of Honor make more sense. Having read Curse of Chalion, I know that Bujold gets much better, and I have heard that the entries in the Vorkosigan saga improve as they go. Despite its flaws, Shards of Honor was quite readable, and with the promise of better things to come, I still plan on returning to the Vorkosigan series.