Book Review: Lincoln in the Bardo 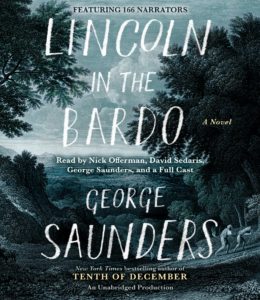 I first heard of George Saunders when I stumbled upon a series of short writing advice videos that he was in. He had a reputation as a master storyteller, and I made a note to try reading one of his books some time. When I saw his novel “Lincoln in the Bardo” popping up on recommendation lists, I decided to give it a try.

I wasn’t really sure what to expect. I knew basically nothing about the book other than the title and that the author had a good reputation. Lincoln in the Bardo turned out to be a very strange book that only partly worked for me.

The book is centered on Abraham Lincoln’s son, Willie, who died of Typhoid fever at age 11. As advertised in the title, the book is about Willie’s ghost as it lingers in the “bardo” – the in-between realm between the world of the living and death. Willie’s ghost encounters a cast of other colorful ghosts, who tell him their stories and try to convince him to leave the bardo and be at peace, while refusing to accept that they themselves should do the same.

Interspersed between fictional chapters are chapters that are composed entirely of little snippets and quotes from relevant historical accounts. I don’t know that all of the quotes were real, but at least one of the sources was “Team of Rivals” by Doris Kearns Goodwin, which I know is a real book.

The book is definitely on the “literary” or even “experimental” side of things. There is sort of a plot, but it is pretty thin, and much of the book is side stories about the various ghosts and their various lives and reasons for lingering in the bardo. Some are funny, some are sad, some are just bizarre.

For me, the best parts of the book were when the two main ghosts, Bevins and Vollman, who serve as narrators, actually enter into Abraham Lincoln’s body as he is visiting his boy’s grave. They get a glimpse of his thoughts and feelings, and the result is a handful of very powerful and moving passages reflecting on grief, the impermanence of life, the helpless feeling of a parent who looses a child. These thoughts, in Lincoln’s mind, shade into thoughts of the war, or the thousands of other sons who have died or will die, and whether the price is worth it. These passages alone made the book worth reading, but they’re surrounded by a lot of weird stuff that didn’t connect as well with me.

I listened to this as an audiobook, which was interesting because it was done with a full cast. The two main readers were Nick Offerman and David Sedaris, and they did a very good job, especially Offerman. But many of the minor characters were also voiced by famous people: Lena Dunham, Julianne Moore, Susan Sarandon, etc. However, some of the very minor parts, especially among the dozens of snippets and quotes, were read by people who were clearly not trained actors (indeed, I noticed the cast listing seems to have Saunders’ entire family, for example). It’s amazing what a difference it makes when you go from a trained voice actor to a regular person who reads without any inflection.

Overall, I’d say this was worth reading for its occasional beautiful and poignant moments, but was a little on the strange side for me. I’d like to give some of Saunders’ short stories a try. They’re what he really is famous for, and I suspect I will like his short form writing better.