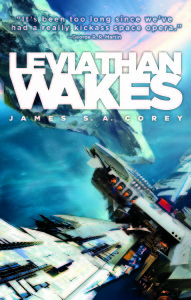 One of the side effects of having a day job that borders on science fiction (shooting rocks on Mars with a laser mounted on a nuclear-powered robot) is that I find it’s much harder for “hard” sci-fi to impress me. (“Hard” sci-fi, for the uninitiated, is sci-fi that tries to be scientifically accurate.) Too often it’s full of cardboard characters who are there just to advance the plot to the next point where the author can lecture the reader about the next gee-whiz piece of futuristic tech that they researched.

However, I had heard some great things about Leviathan Wakes by James S.A. Corey (a pen name for Ty Franck and Daniel Abraham) and the rest of the Expanse series. I even had a brief exchange on twitter with them in which they expressed interest in asking me some questions about Mars (alas nothing ever came of this). So I was cautiously optimistic when I finally was able to get my hands on an ebook of Leviathan Wakes from the library.

Turns out no caution was necessary: Leviathan Wakes was excellent. Possibly the best hard science fiction I have read since Red Mars. Heck, in many ways, it’s better than Red Mars. Leviathan Wakes is set a few hundred years into a future where humanity has colonized the solar system. Often sci-fi skips over this phase of exploration and just waves its hands and says that humans have colonized the stars and there is faster than light travel so now let’s go fight some aliens. That’s not the case here. Instead of shying away from the messy, slow, complicated process of becoming a multi-planet species, Leviathan Wakes drops us right in the middle of it. Earth is still the cradle of life and is required to sustain the colonies, but only barely. Mars is a sovereign nation with a dominant military presence in space. Ceres and Eros and other large asteroids have been reconstructed into giant space stations, home to millions (artificial gravity provided by spinning up the whole asteroid and building stations such that “up” is toward the interior of the asteroid”). The asteroid belt and outer planets have loosely allied into the “Outer Planets Alliance”.

The book does a great job with the technical details. The main bending of the rules has to do with the propulsion system used by the ships. Other than that everything is pretty good. There’s no artificial gravity fields or “inertial dampers”. Instead gravity is provided by either spinning or accelerating. For high levels of acceleration, people have to strap into padded couches and get injected with a cocktail of drugs to avoid passing out. Combat in space is as much a dance of jamming communications or being dark to radar or detecting infrared signatures as it is about actually firing ordnance (and of course, it’s mostly missiles since the distances involved are usually too larger for ballistic projectiles to make sense).

But while it is good with the technical details, the book doesn’t get bogged down in them, and it has some great characters too. The two point of view characters are Jim Holden, an idealistic captain of a small crew (a bit reminiscent of Firefly) who keep ending up in the middle of unexpectedly significant events, and Miller, a washed up detective on Ceres trying to complete his final missing person case against all odds (bringing a bit of the noir/mystery genre to the book, especially in the first half). The supporting cast are good too: Naomi Nagata (Holden’s highly competent XO), Alex Kamal (a Martian-born ex-navy pilot), and Amos Burton (the hilarious mechanic). Even minor characters have distinct personalities and a role to play in the story.

The future of Leviathan Wakes feels real. It’s not just a bunch of white American scientists and steely-eyed missile men with “the right stuff”. The space stations are huge and messy and multicultural. Kids from the slums of Ceres speak an almost incomprehensible mash up of slang and various languages. The Mormons are at Tycho station, preparing to launch a generation ship to the stars. There are women in positions of authority (head of security on Ceres, admiral in the Martian navy, etc.). Arabic and Hindi are commonly spoken, and many other cultures make cameo appearances in the names of minor characters. This all adds up to a feeling of verisimilitude, like this is a future that could really exist.

To me, that’s one of the best things about this book. It makes it feel possible to colonize the solar system, something that in my line of work it’s easy to get cynical about. I was discussing the book with a co-worker the other day and she said something that I realized really rang true. Not only is it a good book, but it makes me more excited about my job because in some small way I’m contributing toward the future that the book depicts.

So ok, the technical details are good, the characters are good, what about the plot? It’s awesome. This is a long book, but it’s a page-turner. Every chapter ends with something that makes you want to start reading the next one. Cliffhangers can be poorly done, with the reader wondering what just happened or getting annoyed at the author for hiding things. There’s very little of that here. Instead you get the good kind of cliffhanger, where the chapter ends with some new twist or piece of information with such major implications that you just have to turn the page and find out what happens next. I was reminded in the best possible way of Storm of Swords, where the book seemed to have several climaxes because so much happened. A similar thing happened here. I feared I was nearing the end at one point because things were starting to feel climactic, only to check on my kindle and find that I was only halfway finished! I do much of my reading out loud to my wife right before bed and I can always tell if a book is working by how long it takes for me to start to nod off. I’ll just say this: I didn’t nod off very often with this book!

Bottom line? Leviathan Wakes was awesome. I highly recommend it to everyone, especially my planetary science colleagues. I am eagerly looking forward to reading the next books in the series. There is also apparently a TV show on SyFy based on the books called The Expanse, so I will need to check that out (once I have verified that it won’t spoil events in the later books).