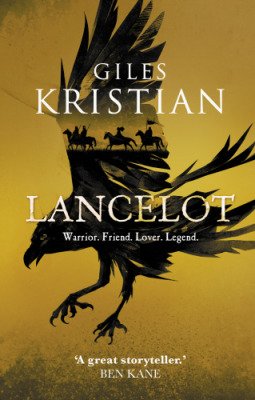 I follow a lot of authors on Twitter. This is because authors tend to be interesting people with interesting things to say, and because I like to hear about writing from people who do it for a living, but it also has the benefit of allowing me to hear about new books. A few months ago, I saw a tweet from the historical fiction author Giles Kristian, seeking bloggers who write about books and offering to send a copy of his new book Lancelot. I had already heard good things about the book and it sounded like something I would enjoy, so I responded, and shortly thereafter I received a package from the UK with a signed trade paperback copy of the book! 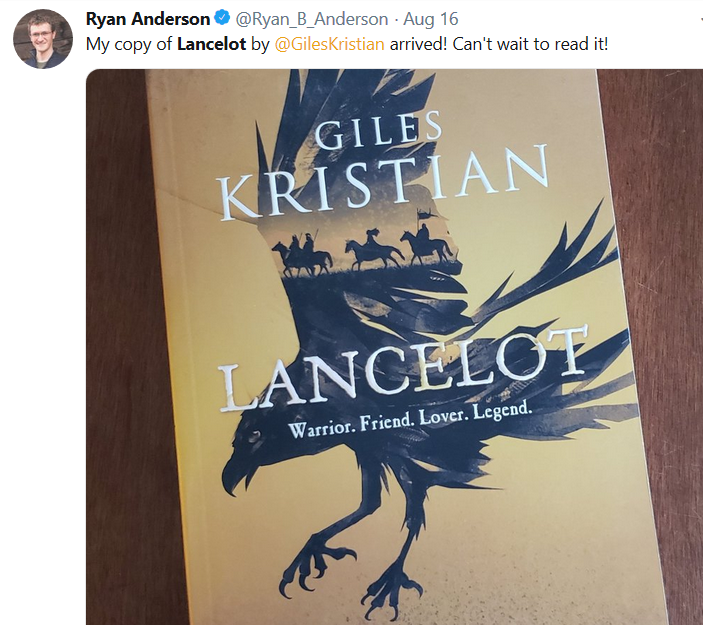 I’d also like to take a moment to acknowledge that this is a really cool book cover that fits the tone of the book perfectly.

So, with all that said, let’s talk about the book! I really enjoyed it. It is a historical fiction retelling of the Arthurian legend, with Lancelot as the main character. It’s set in the years after the downfall of the Roman empire, when Britons are fighting against invading Saxons. For fans of Arthurian stories, don’t expect this book to follow exactly the stories you might be familiar with. In my opinion, this is a good thing: when retelling such a familiar story, it can be tempting to follow the well-worn ruts laid down by previous authors, and end up sounding the same and not really adding much. Kristian manages to avoid this. Lancelot stands on its own, primarily because it focuses on the character of Lancelot, fleshing him out in a way that I haven’t seen before. He’s still the Lancelot that we know and love: obsessed with Guinevere, practically unstoppable in battle, with a “complicated” relationship with Arthur. But that is now supported by a tragic backstory and a fierce (and flawed) personality that fits with the legendary character but humanizes him.

The story doesn’t follow the legends exactly, but as someone who is pretty familiar with them, it was really fun to see how this retelling portrayed different famous characters and events. There’s a special thrill when you realize that the horse warrior in the shining scale armor that is being introduced is Arthur, or the wiry old druid with tattoos and a cloak of raven feathers is Merlin.  Many other familiar knights of the round table and other characters make appearances throughout the book, and it was great to see this version of them.

This novel walks right on the borderline between low-magic fantasy and historical fiction, which is an area that I wish more authors would explore, and one that I often gravitate toward in my own fiction writing. There are hints of magic at times, and of course the source material is mythology rather than history. But at the same time, the details of the setting are historical. The lingering influence of the Romans is felt in their ruins, and in some cases in the lineage of certain characters. The details of the battles feel authentic (I’m no historian, so I can’t say for sure) even if the battles themselves are invented. Likewise the smaller everyday details that can really make or break historical fiction. Sometimes a little detail will jump out and ruin the suspension of disbelief (I am thinking of one Roman historical fiction book where they repeatedly mention fields of corn, a crop from the Americas), but there was none of that here for me.

If I have one “complaint”, it is that I never really got a feel for the bigger picture. There are a lot of names of kings and kingdoms bandied about, but I never really felt like I understood the geography of where they were or what their relationships were the way I do for something like Game of Thrones. Part of this is because of the unfamiliar names (Karrek Loos yn Koos, Caer Gwinntguic, Cynwidion, etc.), and part is simply because this is really a much more focused story of one man so the bigger picture doesn’t actually matter as much. (I should note: there is a perfectly fine map in the front of the book, but I was lazy and didn’t refer to it much.)

I’ll finish by noting that this book reminded me very strongly of Bernard Cornwell’s “Saxon Tales” series. Even though Cornwell’s books are set centuries later, the basics of medieval warfare didn’t change very much in that time, and both stories feature a headstrong but extremely skilled warrior fighting for a king who is trying to unite Britain against an invading force.  Both stories  depict a bloody, gritty, world of shield walls and gruesome wounds and personal rivalries. Kristian acknowledges the influence of Cornwell’s writing in the Author’s Note at the end of the book, in particular Cornwell’s Warlord Chronicles series, which is its own take on the Arthurian legends. I haven’t read those Cornwell books so I can’t compare directly, but the influence is undeniable. It’s been a few years since I read anything by Cornwall, but in my opinion Kristian’s prose is better: a bit more imagery and flowery language than I remember from Cornwell, but not so much that it is over the top.

Bottom line, I really enjoyed this book, and I really appreciate the author being kind enough to send me a copy! For anyone who is a fan of bloody and gritty fantasy or historical fiction from authors like Joe Abercrombie, George R.R. Martin, Conn Iggulden, or Bernard Cornwell, I definitely recommend giving Lancelot a try.

How did I end up an angry liberal activist?

The Fire at Notre Dame