It’s no secret that I like to write (hence this blog), but what you may not know is that I have a long-standing interest in writing fiction. Note that this is different from actually writing fiction: I rarely do so, for a variety of reasons that really deserve their own post. But several years ago I did manage to successfully participate in National Novel Writing Month (NaNoWriMo), churning out 50,000 or so words of rather awful fiction. One of the key steps in preparation for NaNoWriMo that year was doing some basic worldbuilding.

I have a really hard time writing a story if I don’t know the lay of the land…literally. If my characters have to venture off into an undefined world, then I don’t know what their options and limitations are and so I am paralyzed with indecision. A map provides the framework on which the events of the story can play out, and I find that the constraints that it provides are crucial for understanding everything from the placement of cities to the boundaries of nations to the history of empires. So much is influenced by geography that without it I’m lost.

I am trying to get back into fiction writing: I have had the nebulous idea for a novel rattling around in my head for years but to really write it, I needed a world. For my NaNoWriMo map, I used the program AutoRealm which had some nice capabilities, but didn’t make very attractive maps. So for this new worldbuilding effort, I decided to use a proper image editor: GIMP.

GIMP is an open-source program similar to Photoshop. I use it all the time for work to make figures, so I know my way around it, but I haven’t used it much to just draw. And to be honest, I didn’t want to just draw continents because it’s actually quite difficult to draw natural looking coastlines. I needed something more random.

After searching online, I found an excellent site called the “Cartographer’s Guild”, where lots of worldbuilding enthusiasts share their tips and tricks in very helpful tutorials. I won’t duplicate all of that effort here, but I will point to their helpful collection of tutorials. In particular, I found the one entitled “Using GIMP to create an artistic regional map” very helpful.

It turns out GIMP has a tool that renders a cloud-like texture, and by stretching the black and white levels on randomly generated cloud textures, you can make random continent-shaped blobs. For most people, this would be enough, but since I know way too much about planets, I wanted to make my random cotinents more realistic, with things like island arcs and shapes that could conceivably come from plate tectonics. So I made several sets of random blobs ranging in size from continents to islands, and selectively merged them together to make what I thought were more realistic (but still mostly random) continents. Here’s what the end result looked like:

I played around with some of the other tips in the tutorials to make attractive oceans and land colors and got this:

From here, the next step was adding mountains. I went back and forth on whether I wanted to try to make realistic looking mountains or line-drawings like you might see in a map in the front of Lord of the Rings. In the end, I decided to go with the line drawing option. I alread had some idea of where I wanted my mountain ranges, the trick was drawing the actual mountains. I am too lazy to draw them individually, so I looked up how to create a brush in GIMP that cycles through a set of simple images with each click. The term for this is an “image pipe” and it’s actually pretty simple: you just make a small image in GIMP with multiple layers and draw a different image on each layer. They you save it as the appropriate file type and voila! Choose that brush and then each click draws one of the layers. Here are my mountain layers as an animated gif:

With mountain ranges in place, the next logical thing to add was deserts. So I thought a bit about what the prevailing winds are like on an Earth-like planet, and the placed deserts in the rain shadow of mountain ranges. I also added some nice white shading toward the poles and gray shading around mountain ranges.

At this point it was looking pretty good if I do say so myself! The main missing natural features that might be relevant to any stories set in this world are forests and rivers. For forests, I decided to just use one of the built-in brushes in GIMP, along with the “apply jitter” option to paint scattered dark green specks for trees. Rivers were a bit trickier. Just like the continents, I didn’t want to hand-draw them because they would not be naturally random enough. For this, I found a simple free program that can draw fractal lines and export them as vector graphics. I drew a bunch of fractal lines then loaded them into my GIMP project, colored them blue, and placed them where it seemed appropriate. The end results? Realistically random-looking rivers! Here is the final map: 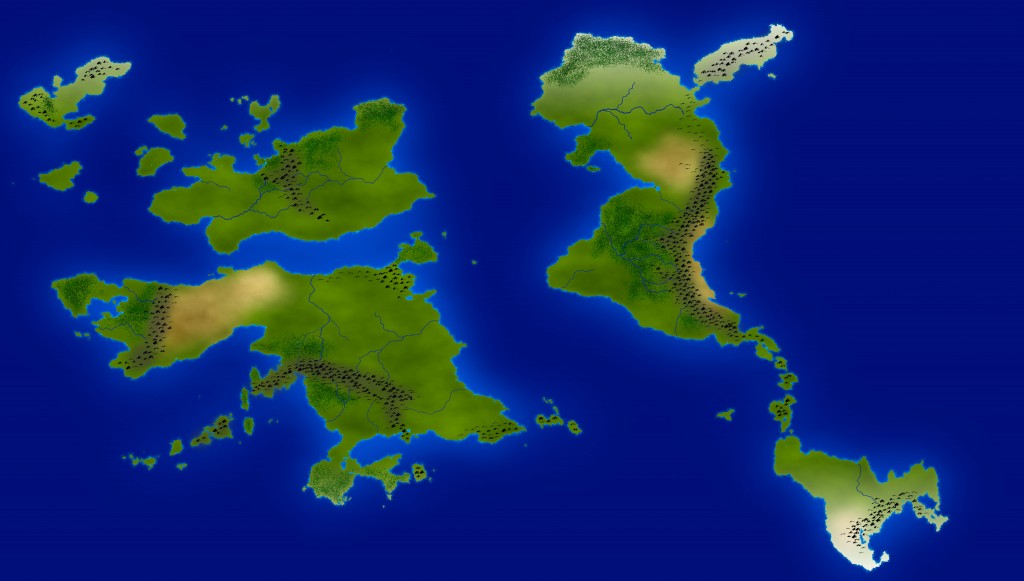 I’m pretty happy with this map, and I’m eager to start adding cities and countries and figuring out how the geography that I’ve created here influences the seed of a story idea that I am trying to develop. And even if the story that I write set in this world doesn’t end up being very good, I learned a lot of fun GIMP tricks in the process of making this map!