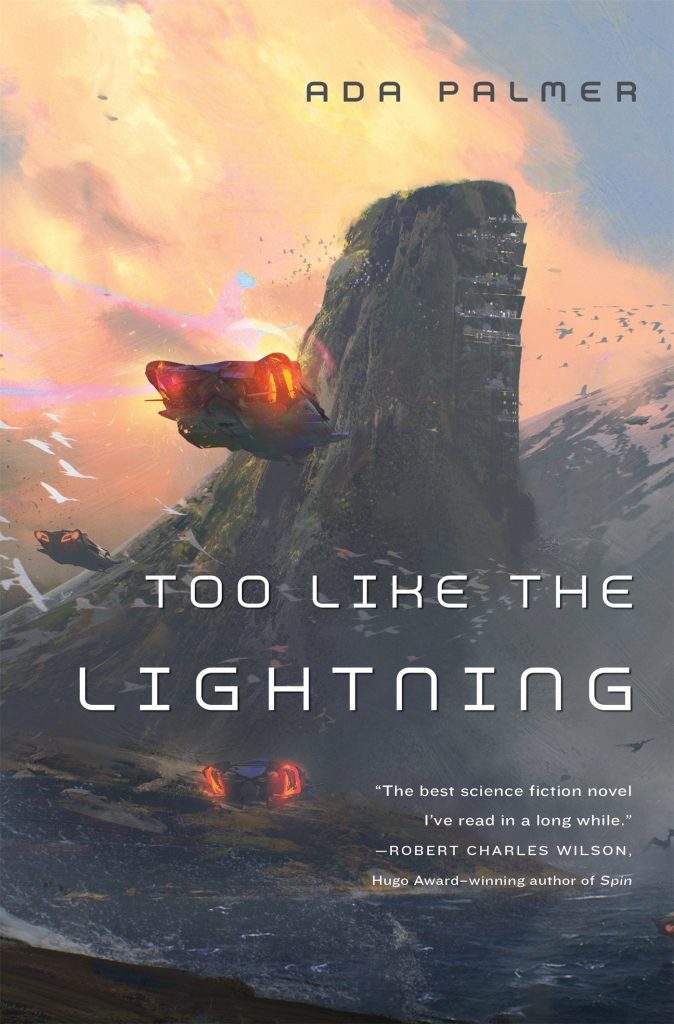 They say you’re not supposed to judge a book by its cover, but what about its title? The title of Ada Palmer’s “Too Like the Lightning” gripped me the first time I saw it, and I knew I had to read the book regardless of what it was about. I only learned later that the title is part of a line from Romeo and Juliet:

I have no joy of this contract tonight.
It is too rash, too unadvised, too sudden,
Too like the lightning, which doth cease to be
Ere one can say “It lightens.”

I’ll say up front that although this book is not perfect, I thoroughly enjoyed it. In fact, I can’t stop thinking about it. The basic premise is that several hundred years in the future, geopolitics on Earth looks radically different from what we have now. Technology is advanced enough that people can hop in a (flying) car and travel anywhere in the world in less than two hours, and this has led to a breakdown of traditional nations. Instead, society is organized into several different groups or “hives” and people can choose which one they ant to be a part of, if any:

Here is a more detailed description of each hive, written by Palmer herself.

This fascinating vision of the future is only the tip of the iceberg. The novel is crammed full of other really creative ideas about the future, and that’s what really made me love it. Some are relatively minor, like textiles that project an image of the background on their surface rendering the wearer nearly invisible. Others are fascinating and troubling, like “set sets”: humans who have been interfaced directly with computers since birth, co-opting the neural pathways normally reserved for things like sight and smell and taste, turning them into phenomenally powerful biological computers.

The plot of the novel revolves around a family who play a central role in the smooth functioning of this future world. Their two “set-sets” (along with a massive array of supercomputers) are responsible for the flight paths of the billions and billions of high-speed cars that zip around the world and make the distributed “Hives” possible. (The cars of course, are not driven by their passengers, and crashes are so rare that they make international news when they occur.) Only the small Utopian hive does not use their system of cars. Unbeknownst to most, the family also harbors a boy with extraordinary abilities that I won’t divulge here, and protecting him from discovery is a major driver of the plot.

But really I’ll be honest: this is not a novel about plot. It’s about this vivid and fascinating vision of the future in all of its glorious, messy, detail. The plot serves primarily as an excuse for the main characters to meet and interact with the outlandish characters who lead each of the Hives, and therefore to show the reader another facet of the complicated future world. (And of course, just as has often been the case with leaders of nations throughout history, the leaders of the hives all know each other and are connected by a web of marriages, adoptions, etc.)

In case the intricate worldbuilding didn’t clue you in, this novel is unabashedly smart, and to some it may veer into the territory of “pretentious”. You see, “Too Like The Lightning” is obsessed with Enlightenment philosophy. The writing style of the book is heavily influenced by this time period as well, with a narrator (who is also a main character) who speaks directly to the reader, sometimes even inventing interjections from the reader and responding to them. Palmer does some exposition jiu-jitsu by having the narrator ostensibly relating the events of the novel to a reader even farther in the future, but by explaining things to that future reader, we in the “past” are also able to understand things. Here, it’s probably easier if I just show an example, from where the narrator is explaining why he’s writing in the style of the 18th century:

“You will criticize me, reader, for writing in a style six hundred years removed from the events I describe, but you came to me for explanation of those days of transformation which left your world the world it is, and since it was the philosophy of the Eighteenth Century, heavy with optimism and ambition, whose abrupt revival birthed the recent revolution, so it is only in the language of the Enlightenment, rich with opinion and sentiment, that those days can be described. You must forgive me my ‘thee’s and ‘thou’s and ‘he’s and ‘she’s, my lack of modern words and modern objectivity. It will be hard at first, but whether you are my contemporary still awed by the new order, or an historian gazing back at my Twenty-Fifth Century as remotely as I gaze back on the Eighteenth, you will find yourself more fluent in the language of the past than you imagined; we all are.”

I suspect some readers might balk at the almost self-indulgent way this book goes on about various philosophers and how their works are relevant for certain aspects of the future society depicted, but I found it refreshing. Usually if sci-fi is going to get self-indulgent about some subject, it’s science (often physics). Most people don’t bat an eye when the brilliant scientist in a hard sci-fi novel gives a big speech explaining special relativity or the chaotic orbits of planets in a multi-star system, or what have you. In fact, books like that are often applauded for their perceived realism. I’d argue that “Too Like The Lightning” is doing exactly the same thing, explaining some point of philosophy that is just as fundamental to understanding the world depicted in the novel as special relativity is fundamental to understanding Tau Zero, for example.

What really impressed me about this book (Palmer’s first published novel!) is the confidence and skill with which Palmer manages to pull off several very difficult things. The voice and narrative style, as you can see in the quote above, are very distinctive and unusual. The world she has created is intricate and complicated and feels organic, which means it is potentially confusing, yet somehow Palmer manages to write in such a way that you always have just enough information to want to keep going to learn more. From the very beginning , it is written in such a way that you trust all will be made clear in due time. Often I lose patience with stories that string the reader along, but “Too Like the Lightning” does it extremely well. In this, it has a lot in common with Neal Stephenson’s Anathem, which also contains lots of philosophical discussions and likewise provides the reader just enough information to understand but doles it out slowly.

Finally, I found it refreshing to read far-future sci-fi set here on Earth rather than a space opera set in an unknown star system on the other side of the galaxy. Most authors writing this far into the future use the time gap and fictional worlds they’re writing about as an excuse to start with a relatively blank slate. Palmer instead takes the far more challenging route of setting her story here on Earth. That means that her worldbuilding has to deal with the complicated, messy baggage of thousands of years of real history, but as a historian Palmer is up to the challenge and the result is a sci-fi vision of the future that feels far more “real” than the hardest “hard” sci-fi.

I was disappointed at the end of the book to learn that it is really only the beginning of a longer story, but that’s unfortunately par for the course in speculative fiction. That said, I still thought the twists and revelations at the end were very good. As I listened to the end of the audiobook (which has a great narrator) on a plane, I may have said “whoaaah” out loud. I am eagerly looking forward to reading the next book in the series.