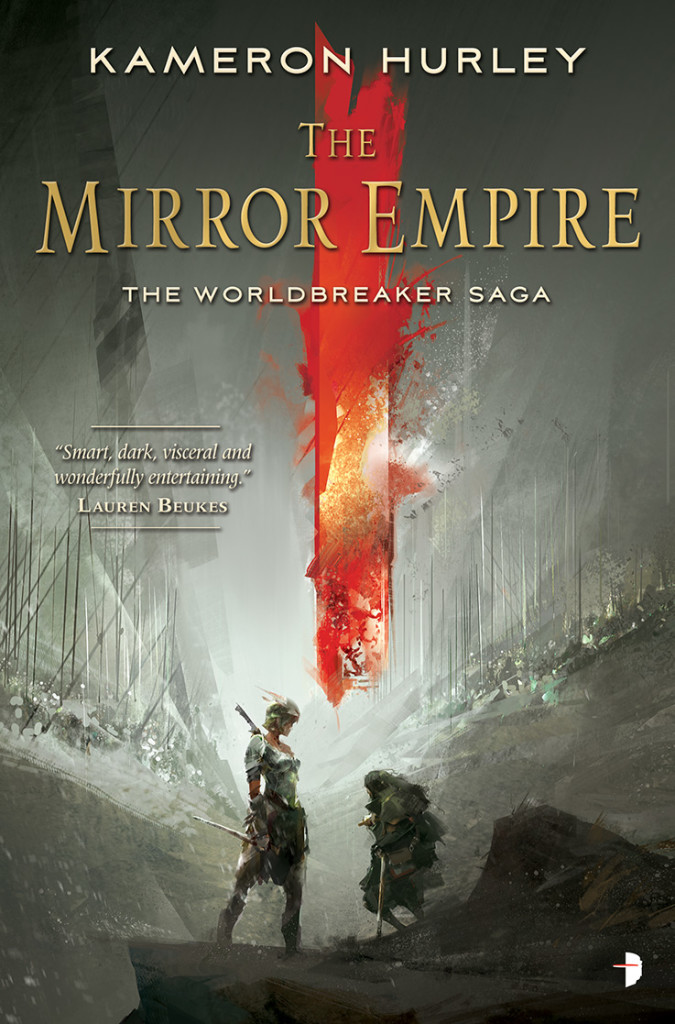 I really wanted to like this one. I first encountered Kameron Hurley’s writing in her truly excellent piece “We Have Always Fought: Challenging the Women, Cattle, and Slaves Narrative“, which won a Hugo award last year. When I heard that she had a new epic fantasy series coming out, I was excited to read some fantasy that dares to break out of the mold of western European clones and Tolkien imitators. On this count, Mirror Empire does not disappoint.

Mirror Empire is set in a world populated by mostly matriarchal societies, where most soldiers and religious leaders are women, and men are prized for their beauty and/or dancing skill. Marriage is not limited to one man and one woman, but can involve many adults of various genders. In one of the societies, there are three pronouns, in another society, there are five.

Gender roles aren’t the only place where Mirror Empire deviates significantly from your typical Tolkien imitators. Much of the world is an inhospitable forest, populated by carnivorous plants. Fortresses and temples are living structures, grown and sculpted by magic users (we’ll get back to the magic in a moment). The Dhai culture which lives in the forests are pacifists: they aren’t even allowed to touch another person without asking permission first, and they eat only plants, except when a loved one dies, in which case that person’s organs are cooked and served in a ceremonial feast.

In this world, instead of horses, people ride giant dogs or giant bears, except calling the creatures “dogs” or “bears” is a somewhat misleading shorthand. When they are described in detail it becomes clear that they are something more bizarre altogether. Instead of using pigeons or ravens to carry messages, “sparrows” are used, but again the common English word does not convey how bizarre the “sparrows” in Mirror Empire are.

The magic in Mirror Empire is based on the orbits of several moons. As a certain moon rises higher in the sky, those people who can channel that moon’s power are capable of doing magic. One of the moons gives control over air. Another, control over plants. The story is set during a time when the moon Oma is ascendant. The other moons rise and fall on decade-long timescales, but Oma rises only every few centuries. Oma gives all sorts of strange powers, mostly driven by the power of blood, but it also has the strange side effect that it opens portals to parallel dimensions and that’s where things get interesting.

As Oma rises, it is revealed that strangers in a parallel world, very similar to the main world where the story is set, are invading. For each person in the main world, their clone exists in the mirror world. To cross from one world to the other, your clone in that other world must be dead. A couple of key things are different in the parallel world. First, the Dhai are not pacifists, they are a deadly and powerful empire. And second, the parallel world is doomed. So the warlike Dhai in that world would very much like to come take over the main world of the story. To do that, they have to start killing people, so more can cross over. Plot ensues.

It’s a fascinating world, and an interesting premise. Unfortunately, the storytelling doesn’t live up to the ambitious worldbuilding. From the beginning, I struggled to keep the many characters straight. There are numerous point of view characters, and a multitude of additional minor characters. Even when I did know who the characters in a given scene were, I rarely understood their motivations. At one point a character dramatically kills herself but I still have no idea why. Later, another character holds an innocent little girl hostage, and then kills her and shows zero remorse. Not understanding character goals is a death-blow to just about any fiction, and particularly when they point of view character is of the anti-hero type. Unless you are really really deep inside their head and have a deep understanding of what they are doing and why the anti-hero will just come across as a confusing jerk.

I should make it clear that I don’t mind books with large casts of characters who have complex motivations. Among my favorite books of all time are Shogun and the Game of Thrones series, both of which have lots of characters and complicated political intrigue and conflicting motives. Why did I have an easier time following Game of Thrones than Mirror Empire? Part of it is that Game of Thrones has it easy. It’s set in a familiar western European fantasy setting. The names are all very similar to typical English names. I think author skill also plays a big role here. George R.R. Martin uses a lot of different tricks to help readers keep track of who’s who. His books are full of sigils and heraldry and titles nicknames for a very good reason: they are shorthand for the characters. You may not remember who Gregor Clegane and Oberyn Martell are, but when you introduce them as “The Mountain that Rides” with the three Clegane dogs on a field of yellow, and “The Viper” with the Sun and Spear of House Martell of Dorne, all of a sudden the reader has a lot more to go on. Likewise, Martin uses heraldry to immediately make the motives and allegiance of even anonymous soldiers more clear. If the point of view character is a Stark and they run into a bunch of soldiers with Lannister lions on their uniforms, you know there is going to be trouble. Mirror Empire lacked a lot of these clues, and combined with the less familiar world, I think that played a big role in my confusion.

I hoped at the beginning of Mirror Empire that things would get more clear as I read on, but although some things are explained, I spent much of the book confused. It was like missing the first few weeks of math class and then trying to catch up. Even as I caught up, the story built on previous details and events that I only partially understood, so that comprehension was always just out of reach. By the end I was reading, not because I was invested in the events of the story, but because I wanted to be done.

So, bottom line, I’m conflicted about Mirror Empire. There is so much about it that I love. It’s not a Tolkien knock-off! It is set in a bizarre and interesting world. It plays lots of fun games with gender roles. Carnivorous forests! Evil invaders with an actual motive beyond just “spreading darkness”. I want to see more of this level of creativity in fantasy! I just wish that, in this case, the execution matched the ambition. It’s pretty clear from the ending that there will be more books in this series. Hurley is a relatively new author, so I am hopeful that with more experience, her future books won’t suffer from the problems that made Mirror Empire fall short of its very lofty goals.